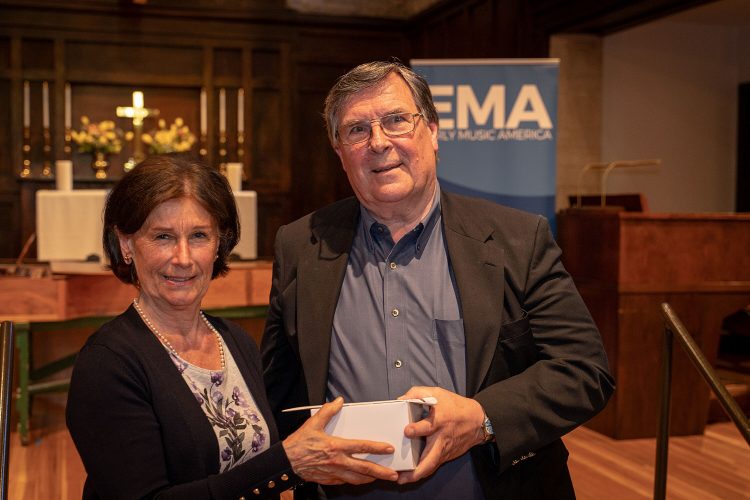 Early Music America is excited to announce Lyle Nordstrom as the recipient of the 2019 Howard Mayer Brown Award for lifetime achievement in the field of early music. This award is named in memory of the renowned and beloved musicologist from the University of Chicago, Howard Mayer Brown.

As a rock guitarist in high school, Lyle wrote a paper on Baroque music and also visited a concert of Baroque music performed by George Houle at Macalester College in St. Paul, Minnesota. Two years later he enrolled as a major in chemistry at Macalester, but sang in the choir, which that year was performing Bach’s Mass in B minor with the Minnesota Symphony under Anton Dorati. This experience piqued his interest in that repertory and he moved gradually to pursuing a major in music (after being advised not to do so as he could not play any instrument and would obviously never become a performer). He was formally a music composition student but became intrigued with other musical styles that he heard in music history classes. He convinced his parents to give him a recorder for his birthday. (It arrived on the day of JFK’s assassination, making the whole experience very conflicted.) He threw himself into learning the instrument, and became proficient quickly to the degree that he got others involved, giving several concerts as well as a senior recital on recorder.

That fascination led him to Stanford University, and, ironically, back to George Houle who at the time was running the early music program there. At Stanford he earned an M.A. and D.M.A. in performance practice, finishing in 1969, when he was left with the care of the early music program during Houle’s sabbatical leave. Though primarily a wind player, he also studied viola da gamba and began lute study with Stanley Buetens.

During his time at Macalester and Stanford, he found it excitingly rewarding to work with others to inspire them about this music, and so decided to emphasize teaching over pure performance. (At the time, another possible option was to join the New York Pro Musica.) He took a position at Oakland University in Rochester, Michigan where he remained for 23 years. Oakland became one of the most active early music programs in the US and brought students from several areas around the country. The Oakland Renaissance Ensemble toured throughout the Midwest and East, sometimes doing 30 concerts a year. There were many graduates of the program but among the most visible have been David Douglass, Ellen Hargis, Michael Lynn, and Joel Frederiksen (Germany).

In the course of teaching, he became increasingly focused on the lute and its repertory, finding it a fascinating area of research. In 1976 he took sabbatical leave to pursue this research in Europe, spending time at the Schola Cantorum Basiliensis in Switzerland in study with Eugen Dombois and Tom Binkley. There he met Paul O’Dette, who was a student there, and the two started playing lute duets as well as the Morley Consort “broken consort” music. Paul was moving back to the United States that fall to teach at the Eastman School of Music, so Lyle floated his idea of a professional ensemble based around the six members of the Consort. From this conversation, The “Musicians of Swanne Alley” were born. That ensemble toured and recorded for twenty years becoming one of the highly-regarded early music ensembles in North America and Europe.

In search of new musical and administrative experiences, Lyle moved to Clayton College and University outside of Atlanta to take over as department chair, and launch an early music program there. Larger productions became possible, and the operas Dido and Aeneas, Venus and Adonis, Mayday (Thomas Arne) and The Marriage of Figaro (with classic orchestra), as well as staged productions of several Monteverdi balli, were performed. Notable students from there were Paula Fagerberg (harp), Craig Marchetti (lute, now living in Italy), Jolle Greenleaf (voice), and Holly Chatham (keyboard). During that time, he founded and directed the Atlanta Baroque Orchestra which performed not only in Georgia, but also Florida, Alabama and North Carolina. (He retired from that position in 2003 and violinist Julie Andrijeski is now the director.). During that time, he also taught lute at Indiana University for two years.

In 2000, he accepted the position of Director of Early Music at the University of North Texas, one of the country’s largest and most prestigious music schools. An imaginative early music Collegium program had already been well established under the late Cecil Adkins, with active student participation and a large collection of early instruments. However, the program operated strictly under the umbrella of the musicology department. Lyle saw the need to professionalize the program so that students could study this music as an official part of their curriculum. To this end, he worked to establish related field (minors) for both the Master’s and Doctoral programs and to bring performances to a more professional level that would be on a par with the other ensemble programs at the College. In addition, he established the Collegium Singers and brought several important instrumental instructors to the University: Cynthia Roberts, Kathryn Montoya, and Keith Collins, among others. The early music large and chamber ensembles soon became some of the sought-after organizations at UNT. Several students have gone on to professional careers in early music, as well as doctoral and other programs at Indiana University, Eastman College of Music, and The Juilliard School. He retired from UNT in 2010, leaving the expanded overall early music program in the hands of Paul Leenhouts and the Collegium Singers with Richard Sparks.

During Lyle’s 10-year tenure, ensembles performed yearly at BEMF and Berkley Festivals and also performed at the 2008 Bolivian Baroque Festival (with a side trip and performances in Peru). Under Lyle’s direction, they also issued four CD recordings. During these years, he was also on the Board of Early Music America and proposed, and partially funded, the Young Performers Festival as a way to ensure that more college students would be exposed these exciting festivals, with their high-level performances. This has continued as an important component of EMA activities to this day.

With his retirement in 2010, Lyle, and his wife, Pat, moved to the mountains outside of historic Cumberland, Maryland. There he met Ryan Mullaney, who had just finished his master’s degree in choral conducting at Temple University. Ryan also had a strong interest in early music and together they formed Mountainside Baroque, an organization that has brought a unique and varied performance experience to the mountains. Now in the midst of their 8th season, they have brought in many wonderful performers such as Stanley Ritchie, Aaron Sheehan, Ésteli Gomez, Paul O’Dette, Christoph Hammer and others. With the support of the community, the program has enlarged. In 2016, the Summer Music Academy was launched, aiming the instruction toward middle and high school students in this underserved area. It has been a pleasure to introduce these younger students to this music and early instruments. In 2018, Mountainside Baroque launched its inaugural biennial “Music in the Mountains” Festival. The four-day Festival highlighted TENET from NYC, Newberry Consort from Chicago, the D.C.-based Washington Sackbutt and Cornett Ensemble, and the HammerKlavier Duo from Germany. People attended from not only Maryland, but also New York, Connecticut, Delaware, Virginia and Texas to attend performances in the many historical churches and venues in Cumberland, to rave reviews. Plans are being made for a second Festival in 2020.

During his 56 years of performing early music, Lyle’s thrust has always been as a strong advocate and teacher of this music. Leading people into the workings and joy of this music, both as performers and listeners, has brought a great satisfaction to him and his wonderful wife, Patricia, who has been performing and facilitating at every stage along the way.