CD REVIEW — “Rome, May 28, 1606: Michelangelo Merisi da Caravaggio, painter and scholar of S. Luca, mortally injured Ranuccio Tommasoni after an argument during a game of tennis.” 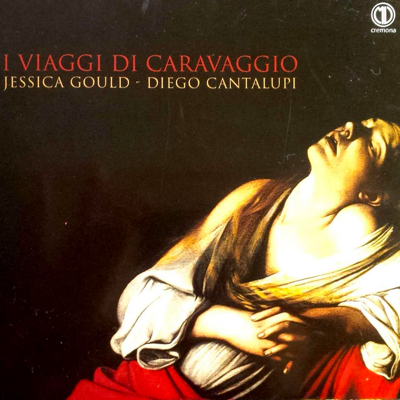 Thus begin the liner notes for this new recording, I Viaggi di Caravaggio — the travels of Caravaggio (1571–1610), who earned himself as much fame for his painting style as he did infamy for his personal life. Caravaggio’s art was foundational to Baroque painting, as it portrayed the human condition in a newly realistic fashion, making use of extreme contrasts of light and shadow to highlight the sensuality inherent in the human form.

But he was also known for being a violent and temperamental person, keeping company with prostitutes, constantly arrested, and, as this story began, killing a man in a fistfight. Afterward, Caravaggio fled Rome for Naples and died three years later under circumstances that are still unclear.

This album acts much like an aural wine tasting, suggesting that some of Caravaggio’s paintings pair well, in subject and style, with musical works composed in the same general time and place. Composers Benedetto Ferrari, Giovanni Felice Sances, Domenico Mazzocchi, and Giovanni Kapsberger all worked in Rome in the early 17th century; Tarquinio Merula in Cremona; and Giovanni Antonio Rigatti in Venice. Each composed spiritual cantatas, canzonettas, and motets on the same themes featured in some of Caravaggio’s works.

The repertoire chosen for the album, then, is largely sacred: works for solo voice and lute accompaniment in the style of Italian monody. Interspersed within these sacred vocal works are several shorter selections for solo lute. The overall program, just under an hour of music, is nicely varied in terms of length, composer, and instrumentation.

Lutenist Diego Cantalupi plays with command; his appreciation for Kapsberger is clear in both the liner notes and in his sensitive treatment of his two Toccatas. The anonymous intabulation of “Vestiva i colli” is quite charming. The two shorter selections by Laurencini of Rome nicely balance the two longer vocal works that precede them, and his accompaniment in the vocal works is solid.

For texts with such depth of emotion, written when communicating an affect was already of utmost importance and connected with chiaroscuro (the extreme use of light and shadow so prominent in Caravaggio’s work), the approach taken here on the vocal selections falls just a bit flat for me.

Jessica Gould’s voice is lovely, yet I find myself wanting more dynamic contrast, more playing with tempo (such as in the recitative-like second section of Mazzocchi’s “Lagrime amare”), more overt emoting. The shorter vocal works, such as Rigatti’s “Ave Regina Caelorum,” are more successful in that regard. It’s a pleasant recording overall, and worth a listen, but lacking the kind of emotional intensity and emphasis on contrast so fundamental to this kind of early Baroque Italian repertoire.