For two centuries, Boston, hub of culture and learning, has been called the “Athens of America.” Fifty years ago, Wolfgang Zuckermann, in his book, The Modern Harpsichord, presented a variant: Boston was the new Antwerp; Frank Hubbard (1920–1976) and William Dowd (1922–2008) were its Ruckers. These two pioneers of historically informed harpsichord making, who opened their Boston workshop in 1949, were largely responsible for the demise of the “plucking pianos” epitomized by Wanda Landowska’s ponderous Pleyel “Grand modèle de concert.” By the mid-1960s, no harpsichordist to be taken seriously would willingly play any of these turgid tinkling dinosaurs. Hubbard and Dowd, paralleled by European makers Hugh Gough and Martin Skowroneck, had, together with performers Gustav Leonhardt and Ralph Kirkpatrick, effected an early-music revolution, the re-revival of the historical harpsichord. 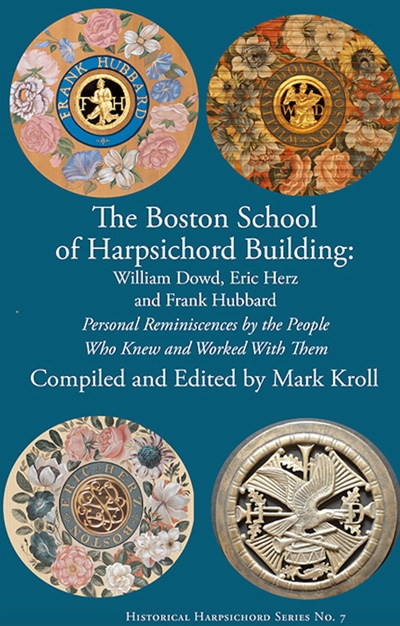 As the early-music movement has recently become a fit subject for musicologists, doctoral dissertations and scholarly articles about modern harpsichords and their makers have begun to appear. Preserving the raw materials of this history is crucial for such efforts. Zuckermann’s entertaining book provides a broad survey of the status quo in 1969, while more detailed information about Hubbard and Dowd can be gleaned from scattered old interviews, newspaper features, and from their papers, now archived at the Smithsonian. Still, there is much more to be told, and those who knew Frank, Bill, and other figures of the harpsichord re-revival will not be around forever.

Thus, we heartily applaud the prominent Boston-based harpsichordist Mark Kroll, EMA’s book editor, for compiling and editing The Boston School of Harpsichord Building: William Dowd, Eric Herz and Frank Hubbard, Personal Reminiscences by the People Who Knew and Worked with Them. This book is seventh in Pendragon’s Historical Harpsichord series, initiated to honor Frank’s memory and to provide a vehicle for studies supplementing his pathbreaking 1965 book, Three Centuries of Harpsichord Making. The present volume consists of freestanding chapters, essentially oral histories, by Hendrik Broekman, Greg Bover, Forrest Dillon, Michael Herz, Reinhard von Nagel, Jay Scott Odell, Rod Regier, Robert Smith, Allan Winkler, David Winston, and Thomas and Barbara Wolf, all of whom worked with the founders of the Boston School, many themselves going on to become notable figures in the early-keyboard world.

I habitually say “Hubbard and Dowd,” as the names appeared on the nameboards of their harpsichords until they went their separate ways in 1958. Frank, regarded by many as “titular head” of the Boston School, was two years Bill’s senior and, as the more ostensibly scholarly of the pair, attracted the academically oriented. But it was amateur pianist Dowd who introduced amateur violinist Hubbard to the harpsichord and, as revealed by old letters quoted in the editor’s introduction, had even started to make one by 1942. Partial to Hubbard since arriving in Boston in 1967, I must ultimately confess that I found the tone of Dowd’s instruments to be superior. Certainly Bill’s clientele included significantly more high-end concert artists than Hubbard’s.

Two curious trends pop up here and there in the book. One was an enthusiasm for boating, partly explicable by the similarities between the construction of harpsichords and wooden boats. Perhaps more telling, however, is organ builder Dirk Flentrop’s observation that playing a mechanical-action organ is like maneuvering a small sailboat with one’s own hands, while playing a large electric-action organ is like a captain’s operation of a steamship by remote control from the bridge. Much the same analogy would apply to playing a fine harpsichord vis-à-vis a Steinway grand.

Another trend was the employment of immigrant cabinetmakers, often with colorful characters. One of these, hired by Hubbard and Dowd in 1953, was Eric Herz (1919–2002). More businesslike than colorful, Eric came with additional professional skills as piano technician and musician. He set up on his own in 1955 and was, as his son Michael writes, often dismissed as “akin to Hubbard and Dowd but ‘less so.’” Less scholarly, less purist, more open to introducing new ideas into the design of his harpsichords, Herz nevertheless made especially reliable instruments, including reasonably priced student models, far better tonally than most non-Bostonian harpsichords. In hindsight, Herz’s historical compromises were of a kind with Hubbard and Dowd’s use of plywood, plastics, and synthetic glues, not to mention Hubbard’s reliance on the kit business to keep his company afloat. The professionalism of the tightly organized Herz and Dowd shops stood in distinct contrast with the atmosphere prevailing among Hubbard’s dilettantish “motley crew” prone (reader advisory!) to grisly workplace accidents.

Kroll serves history well by including Eric as a full member of an alphabetically arranged trio: Dowd, Herz, Hubbard. For future historians, the book’s significance, with the authors’ accounts of their own careers after their D&H&H experiences, extends into the 21st century and the revival of the early piano.

John Koster, after studying musicology at Harvard College, was a Boston-area harpsichord maker for twenty years. From 1991 to 2015, he was Professor and Curator at the National Music Museum, University of South Dakota.