Book Review: Bridging the Gap Between Period and Modern Keyboards

David Breitman’s new book is the product of the author’s long and successful career teaching, performing, and recording on period instruments. It contains valuable and carefully crystallized lessons, which he shares here with readers in equally clear prose. Breitman’s own artistic lineage that connects him to his mentor, Malcolm Bilson, a pioneering figure of the period-instrument movement in the U.S. (whom he acknowledges multiple times in this book), is clear: Many of Breitman’s thoughtful and detailed arguments about the essentials of performance practice echo Bilson’s published scholarship and videos on these topics. 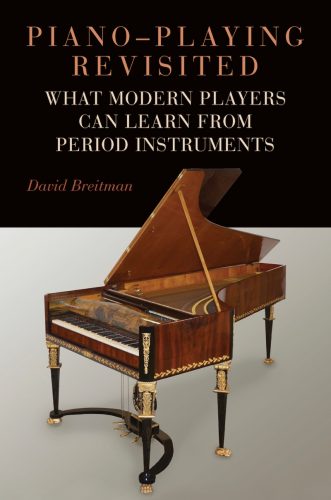 One way Breitman’s book becomes much more than a reiteration of this earlier, foundational work is how he bridges the knowledge gap between modern and period performers with numerous detailed examples. In the chapter on Mozart and Haydn, for instance, Breitman chooses a lesser-known Mozart sonata (K. 282, in E-flat Major) as his case study to discuss central issues of performing in the Classical style, such as articulation, dynamics, pedaling, and different kinds of touch. By looking beyond the most-often played favorites and their canonical interpretations, Breitman gives his work a better chance of landing in his readers’ minds. After introducing readers to the earlier debates of performance practice about authenticity, Breitman shifts the discussion toward his main point: that there is no one “right way” of playing anything but rather that modern players can craft imagination and creativity by revisiting a composer’s own instruments and undertaking a fresh reading of the scores. Breitman’s is not an effort to convert modern pianists into period players; instead, he seeks to enrich modern performances on the modern piano with the insights gained through this comparative process.

Piano-Playing Revisited’s opening chapter situates the piano in a historical context, providing a valuable overview for specialist and newcomer alike. For any reader of this book, it might come as a surprise that, next to the harpsichord and earlier incarnations of pianos, the clavichord, an instrument not widely known by pianists, also figures in Breitman’s work as a useful tool for the modern player. For the newcomer to period instruments and historical performance practice, the overview chapter is helpful in succinctly identifying the differences between fortepianos and their modern counterparts, as well as making a strong case for the modern study of 18th-century treatises, such as those of C.P.E. Bach. Breitman then describes the impact of applying these instructions to performance on both modern and historical instruments. In doing so, he characterizes music making on these instruments as polar opposites.

For example, in terms of how agogic (a term signifying the lengthening of a beat or a whole idea for emphasis) on the modern piano replaces the percussive accent of the fortepiano, or how voicing as we know it on the modern piano creates too thin a sound when applied to the fortepiano. Reality may lie in a grayer area between the either-or options he offers. These remarks create a sense that it is mainly what is learned on the fortepiano that can be applied to the modern piano, as if we can learn little from today’s performers of modern instruments. He gives less indication about how modern instruments might inform performances on historical instruments. For instance, when he implies that many modern pianists are simply unaware of their own pedal use, this sort of generalization of “the other side” risks putting the reader on the defensive, especially readers trained only on modern instruments.

Breitman is at his best when he talks about pedals, however: He fills the chapter “Beethoven and the Evolving Piano” with instructive examples about Beethoven’s and his contemporaries’ indications and possible intentions about the use of pedals. Elsewhere in the book, he presents an equally useful section on pedaling in Chopin’s music. Instead of disregarding Chopin’s pedal markings, as pianists have sometimes done, Breitman suggests trying to understand the musical idea behind them and adapting these to the capabilities of the modern piano.

The book is accompanied by 15 online videos. These are performed by Breitman on a large collection of instruments and meticulously recorded; he performs with equal conviction and refinement on modern and period instruments, even if he might prefer performing on the latter. The videos serve as a great addition to the text, particularly when it can be difficult or too time-consuming for readers to access or choose among existing examples of fortepiano recordings; Breitman deftly guides us in hearing the textural and registral timbres of this instrument. His demonstrations of the differences between early and later pianos, as well as explanations of how the moderator pedal on the fortepiano and the action of the clavichord works, are especially informative. Particularly useful are his performances of the opening measures of Beethoven’s Piano Sonata  in A-flat major, Op. 26, on both period and modern instruments. Here, his performances of this passage perfectly illustrate his reading of the score in the main body of the book.

Across its pages and its additional online materials, Piano-Playing Revisited provides a lively and highly valuable resource for pianists and other performers at all levels of familiarity with period instruments, as well as for non-specialists.

Fortepianist Sezi Seskir is an Assistant Professor of Music at Bucknell University. Her latest CD of Beethoven’s Violin Sonatas performed on period instruments with Lucy Russell was released by the Acis label in 2020.