Delphian’s two flagship early-music ensembles — the vocal Marian Consort and instrumental Illyria Consort — join forces to present an imaginative trip down a coastline that the latter’s Croatian founder, violinist Bojan Čičić, likely knows well. In a program that expands the very definition of “Venetian” music, we retrace a maritime diplomatic mission down the coast of modern-day Slovenia and Croatia that reinforced the relations between La Serenissima and its holdings across the Adriatic, exploring the composers and works that might have been encountered en route. 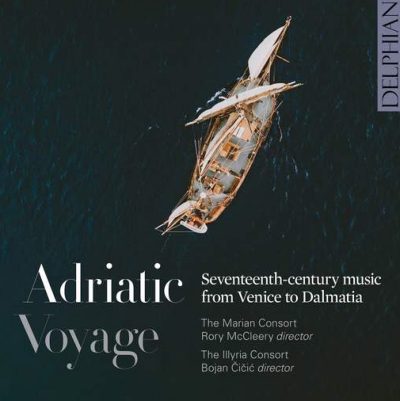 Close your eyes and you might think you were listening to Gabrieli one moment and Monteverdi the next; the album captures a period of transition when the prima pratica was yielding ground to the seconda, and majestic polyphony is thus interspersed with solo motets and secular madrigals. But the composers on the album are not those we would primarily associate with the glory years of Venice; surnames such as Jelić, Lukačić, and Skjavetić reveal their Slavic origins even under a veneer of Italianization (the last, for instance, rendered as Schiavetto).

We are concerned here with a flowering of music on and from the Dalmatian coast, not merely imported there from the glittering capital. In a period of reduced tensions with Ottoman Turkey, the frequently contested Balkan region enjoyed a time of artistic flourishing in its own right. Indeed, some composers even found it worthwhile to relocate from Italy to Dalmatia, among them Gabriello Puliti, who, despite taking monastic vows, seems to have had quite a taste for setting amorous texts. We hear his impassioned “En dilectus meus” from the Song of Songs and the madrigal “Donna ingrata,” a somewhat sulky text bewailing the indifference of the beloved, given a delightfully indignant touch by soloist Rory McCleery.

It’s clear that the Balkan territories were by no means backwaters and were far from slow in adopting the musical fashions of Italy; by 1620, little more than a decade after Caccini’s groundbreaking development of the monodic stile moderno song, Ivan Lukačić had published his own set of Sacrae cantiones in his home town of Šibenik (near Split), which exemplify the same dramatic approach. Three examples are featured here: a rapturous “Panis angelicus” and two more highly charged settings of texts from the Song of Songs.

While the awe-inspiring polychoral immensity of Gabrieli might have been part of the musical landscape at San Marco, the coastal cities of the Balkans lacked the wealthy aristocratic and ecclesiastical patronage to justify works of such magnitude. One of the distinguishing features of this sub-school of Venetian composition is its relatively modest scale, an adjustment to the resources and acoustics available (and perhaps an acknowledgement that the crème de la crème of virtuosos would, despite everything, inevitably have been lured to Italy).

The works of Tomaso Cecchino, for instance, are known to have been written in connection with Hvar Cathedral, located on the small island of the same name. His “Surge propera,” rather than an imposing call to the beloved to “arise and come away,” is a light-footed and almost playful appeal, while the three brief instrumental sonatas featured here eschew — partly out of necessity, in all probability — the dizzy heights of virtuosity that were de rigueur in Venice.

That’s not to say that the instrumentalists here are lacking in technical skill of their own; far from it. Cornettist Gawain Glenton’s diminutions are consistently dazzling, and when he and Čičić join forces to gild the vocal texture (as in the opening track, Francesco Usper’s six-voice “Ave Maria”), the resulting soundworld is utterly luxurious, with the two Consorts melding as if they had been performing together all their lives.

This artistic blossoming was made possible — or at least easier — by the battle of Lepanto, where, in 1571, Venice and its allies had decisively defeated Ottoman Turkey at sea, with the result that the Balkan area enjoyed a period of relative peace. Of course, no military victory of this period would be truly complete without the creation of effusive celebratory art in praise of those responsible, and so it is here. The leader of the diplomatic tour that this album re-imagines, Giacomo Soranzo, had distinguished himself both at Lepanto and subsequently, and is the focus of Bartolomeo Sorte’s laudatory madrigal, “I superbi colossi”: “This is how Fame sang; spreading her sacred wings, she carried your name across the skies, and Giacomo Soranzo was heard resounding.”

Perhaps something of that same triumphalism, and a desire to incorporate allusions to military accomplishments even into sacred music, is behind the final work on the album — a novel “staging” of Psalm 150 as a “Battaglia per sonar e cantar,” in which we return to Francesco Usper for a sparkling, rousing multi-instrumental paean.

David Smith writes as an early-music specialist for Presto Music and performs as a singer with the English vocal group Ex Cathedra and as a lay clerk at St. Philip’s Cathedral, Birmingham, UK.