In 1999, the Lilly Library of Indiana University purchased a leather-bound book of disparate works from a Brussels bookseller. On its spine is written Treatise on Accompaniment…, but that doesn’t fully describe its contents. First is a 27-page music treatise, Treatise on Accompaniment and Composition, followed by an untitled music treatise of six manuscript leaves on different paper; then a Treatise on the musette, with a new method to learn by oneself to play this instrument easily and in little time by Pierre Borjon de Scellery (Lyon: Girin and Rivière, 1672); and, finally, a satirical play, To the Wolf (“Au Loup”), signed and dated “Your daughter Helaine … 1695.” 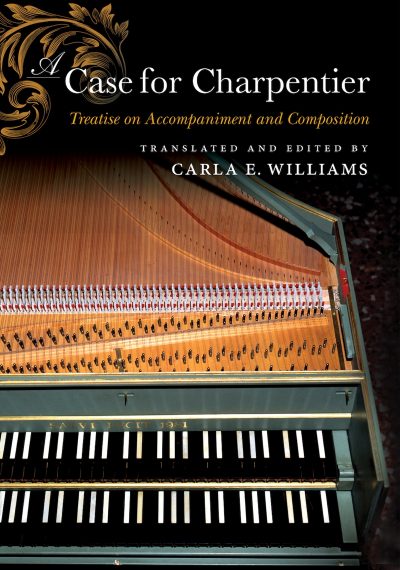 Doesn’t sound particularly like a major musical discovery, except that the second music treatise is written (for the most part) in the unmistakable hand of Marc-Antoine Charpentier (1643-1704). The composer’s cursive script, with its distinctive capital letters, his characteristic formation of G and F clefs, the note shapes and florid final barlines, his “Tournez” indications in lower right-hand corners of a page, and the large “fin” at the end are features found in Charpentier’s autograph manuscripts, the Mélange autographes. A Roman numeral “XLI” written in the upper left-hand corner of the first folio follows Charpentier’s practice in the Mélange of giving Roman numerals to his cahiers of extraordinary commissions. Furthermore, the prose style, format of presentation, and contents of “MS XLI” have much in common with Charpentier’s earlier treatises — Rules of Composition, its Augmentations, and the Summary of the Rules of Accompaniment that he wrote in the early 1690s for the Duc de Chartres (Louis XIV’s nephew).

The Treatise on Accompaniment and Composition was the topic of Carla E. Williams’s 2012 doctoral dissertation in early keyboard performance at Indiana University. She first announced her discovery (“Previously Unknown Charpentier Manuscript at Indiana University’s Lilly Library”) in the online Journal of Seventeenth-Century Music, Vol. 15, No. 1, 2009 (published 2015) (https://www.sscm-jscm.org/jscm/v15/no1/williams.html#ch1). A Case for Charpentier presents a side-by-side transcription and translation of the anonymous Traité and Charpentier’s “MS XLI,” along with an introduction providing historical context. After considering the dating of the manuscript, Williams briefly discusses its contents and draws comparisons with Charpentier’s earlier treatises and those of his contemporaries. She acknowledges having sought advice from the Charpentier scholar Patricia Ranum, who subsequently posted her own study of “MS XLI” on her website with photos of the original manuscript (http://ranumspanat.com/xli_part3.html).

The Table of Contents of the anonymous Traité alludes to “several curious essays” appended at the end. In fact, “MS XLI” is the only essay found there, with no attribution to Charpentier. This is puzzling, since the author refers three times to Charpentier by name (“these observations. . .I got from the late Charpentier and from [Étienne] Loulié”). Ranum surmises that “the author of the Traité knew the two men personally, and he discussed keyboard pedagogy with them. That more or less explains how the Lilly autograph came into the possession of the author of the Traité: Charpentier either gave it to him, or else Charpentier’s heirs did so shortly after his death in early 1704.”

Several years ago, I read Williams’s JSCM communication and examined the images of “MS XLI” on Ranum’s website. Williams’s Charpentier discovery inspired me to write “A French Baroque Primer,” which I published in Early Music Performer (Spring 2014; available online: https://www.earlymusic.info/Performer/EMP33&34.pdf).

John S. Powell ([email protected]) is professor emeritus of musicology, and currently enjoys retirement in Portland, ME. He is the author of Music and Theater in France, 1600-1680 (Oxford, 2000), numerous articles on French Baroque topics (available on Academia.edu), and performing editions of the music of Charpentier, Lully, Campra, Stradella, and others; his edition of Lully’s 1678 opera Psyché was performed at the Boston Early Music Festival in 2007.