What does it mean to have a voice? The phrase, so well-worn that it trips nicely off the tongue, alludes to more than mere physical ability. Voice can denote political agency, in the sense of “make your voice heard,” or can serve as a gesture to our own individual subjectivity, representing a point of access into our literal and metaphorical inner selves. Since the voice acts as a carrier of sound, words, and music, we use our voice to express ourselves and, we might hope, something about ourselves. This is of course true throughout all eras of history, and certainly during the Medieval period. While evidence of instrumental practice from before the 16th century is notoriously patchy, we know that people loved to sing—be that in worship, to entertain, or merely for pleasure. 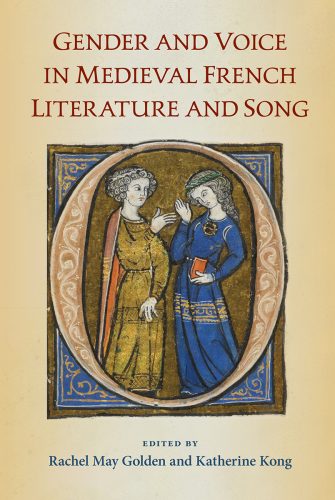 Furthermore, in a culture that relied heavily on oral transmission, the voice was a central part of literary practice. While chronicles, fables, and verse romances are today found in beautiful display manuscripts, it is most likely that they were also enjoyed by being recited or read aloud. Attending to the voices of the past can therefore tell us something both about the identities people wanted to express, and how they expressed them.

The collected essays in Gender and Voice in Medieval French Literature and Song take voice as the starting point for a series of lively interrogations of the construction of gender in medieval culture. Medieval France is here understood as the regions and cultures in which langue d’oc (Old Occitan) and langue d’oïl (Old French) were spoken, vernaculars that came to early prominence during a period in which Latin was medieval Europe’s so-called lingua franca.

This volume follows recent trends in the academy, which has of late seen a proliferation of studies that focused on voice, with the welcome result of redirecting our historical imaginations towards singers as well as writers of song. As these essays demonstrate, listening to the voices of the past may help us better hear women’s contributions to medieval musical life, something that, despite all our best efforts, remains masked by an opaque and fragmentary archive.

That might be accomplished by considering women as performers (as Tamara Bentley Caudill does in her essay on women’s voices in the tenso, an Occitan debate song); by finding traces of the traditionally female practice of lamentation (as in Rachel May Golden’s contribution); or by considering female patronage (as in both Katherine Kong and Meghan Quinlan’s essays). Other contributors, such as Anne Adele Levitsky and Lydia M. Walker, explore the role of voice in the performance of gender identities. This collection of essays thus opens a rich vein of inquiry and is a fitting addition to the fields of voice studies and medieval Francophone studies.

The introduction, written by editors Rachel May Golden and Katherine Kong, surveys current literature on the voice and makes a compelling argument for its resonance in a Medieval context. The reader is lead through medieval and modern philosophies of the voice, ranging from the Isidore of Seville in the seventh century to Adriana Cavarero in the 21st.

While the ten contributions brought together in Gender and Voice in Medieval French Literature and Song take diverse approaches to their titular concerns, they draw from this trove of ideas on sound and subjectivity.

The essays are arranged chronologically and extend from 12th century Arthurian romance to Anne de Graville’s writings in the 16th century. The bulk of the book is dedicated to music of the 12th and 13th centuries, considering the troubadour and trouvère song and the polyphonic and polytextual ars antiqua motet. Four remaining essays provide perspectives on the voice in the context of medieval romances, crusade preaching, and women’s writing. While this collection deftly intertwines literary and musicological perspectives, its cultural scope is necessarily narrow. There is a real impetus to diversify medieval studies, and it remains to be seen how canonical Francophone works can be responsibly located—to use a term of academic shorthand—in the global Middle Ages.

Medieval French literature and song offer fascinating insights into the early codification of courtly love and all the implications it has for our understanding of gender and sexuality. Those who research and teach on the period will find value in this volume, as will those who are interested in the voice more generally. The essays are certainly accessible enough to be read in advanced undergraduate or graduate level classrooms and may also appeal to anyone interested in listening to or performing Medieval French repertory. This volume seamlessly draws connections between literature and song and provides a wonderful example of how new perspectives on medieval material, such as the inclusion of Francophone works, can be found with the application of contemporary critical tools.

Áine Palmer is a PhD student in Music History at Yale University. Her graduate work focuses on trouvère song and its manuscript sources, and she draws on a wide range of critical methodologies (including book history, sound studies, feminist and queer theory, and posthumanism) to consider the role of music and sound in 13th-century Europe.