It’s exciting to discover an up-and-coming early-music ensemble, especially one with a focus on Medieval repertory. Concordian Dawn is just such an ensemble, and one to watch. The phrase “up-and-coming” isn’t entirely appropriate, however; the ensemble was founded a decade ago and won an Ensemble Forward award from Chamber Music America in 2020, although its roster has fluctuated over the years. 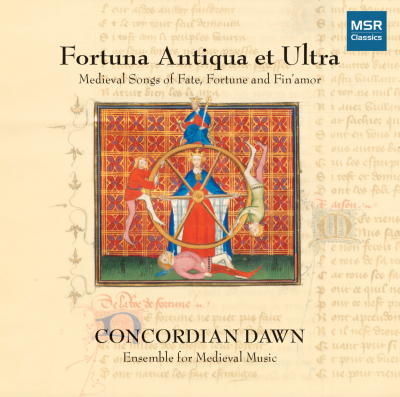 The one constant appears to be its founder and director, Christopher Preston Thompson, who also sings and performs on medieval harp. He and five other excellent musicians perform on this, their debut album, the program for which they first performed in 2018. Had a global pandemic not intervened, we might have had this album some years earlier. As it stands, though, Thompson points out the timeliness of the album’s theme: fortune, desire, and hope, in the wake of forces beyond our control. They focus here on works that depict medieval love and loss, anger, bitterness, grief, anticipation, and joy—emotions many of us have felt over the last few years.

The bulk of the album is comprised of songs of fin’amor, what is all too often thought of as “courtly love.” But far from its popular portrayal as simple unrequited love, fin’amor is more a devotion to an untouchable, unattainable subject, one that often uses the language of romance to explore what Thompson calls a spiritual transcendence. Fortune helps or impedes the narrator on the journey through their Desire, and Hope provides respite along the way.

These three themes wind their way through the recording, from 12th- and 13th-century troubadour songs to polytextual motets by Philippe de Vitry, to a handful of secular works by Guillaume de Machaut, and one lone entry by Guillaume Du Fay. This repertory allows for a nice variety of tempi, moods, and arrangements; the album begins with its lone instrumental work, the Septime Estampie Real, and the small assemblage of instruments—harp, vielle, and recorder—returns throughout the remainder of the recording to provide occasional accompaniment and brief, ambient introductions.

Unfortunately, the tracks are not labeled with which vocalists sing which works, so it’s difficult to give individual credit where credit is due, outside of Karin Weston’s piercing, flexible soprano. She takes the lead in the rollicking motet Tribum/Quoniam/Merito as well as in later works such as “Jamais rien tal non porroit far amor” by Gaucelm Faidit, while many of the other works feature some combination of the four male vocalists: Thompson, Andrew Padgett, Clifton Massey, and David Dickey.

Regardless of who happens to be singing or playing at a given moment, the ensemble really excels at blend and intonation. Listen, for example, to the mesmerizing sway of the anonymous “Procurans odium” or Thalamus/Quomodo. The solo tracks are compelling as well; Thompson’s reverberant harp perfectly bolsters Blondel de Nesles’s melancholy “L’amour don’t sui espris,” while Niccolo Seligmann’s dynamic vielle is a fine contrast to the lower voice in Adam de la Halle’s “Je n’ai autre retenance.” The last track, Gace Brulé’s despondent “Quant voi la flour boutener,” is a real standout. It’s a promising debut, one that might well leave its listeners filled with desire and hope for another album in due course; may fortune favor us all.