Ever since the 1972 publication of his brilliant dissertation-turned-book The Compositional Process of J. S. Bach: A Study of the Autograph Scores of the Vocal Works, Robert L. Marshall has been known as one of the most penetrating of Bach scholars, a reputation honed through his 1985 editorial participation in the Neue Bach-Ausgabe, authorship of The Music of Johann Sebastian Bach: The Sources, the Style, the Significance (1989), and multiple contributions to both scholarly journals and the popular press. In his 1991 Mozart Speaks: Views on Music, Musicians, and the World, Marshall, using a selection from Emily Anderson’s classic English translations of Mozart letters as an armature, fleshed out the picture those present with other early accounts for the “immodest purpose . . . [of making] the subject of our book . . . nothing less than Mozart’s mind.” His articles on aspects of Mozart’s work, though less voluminous than his Bach bibliography, are no less trenchant. 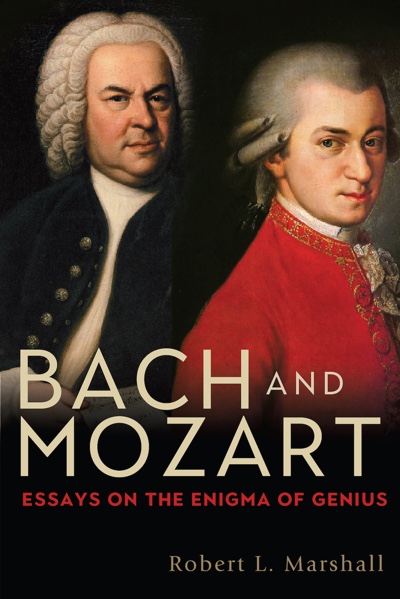 The present volume draws together essays written over a period of some 30 years (1987-2017), suggesting, under the circumstances, parallels with Bach’s B Minor Mass, which similarly presents a carefully curated mélange of the best of its author’s old and new work. Marshall describes the essays as drawing on “a diverse arsenal of interpretive approaches ranging from text criticism to style criticism, from Freudian analysis to Schenkerian analysis, from Harold Bloom, Theodor Adorno, and Edward Said to Maynard Solomon, Charles Rosen, and Peter Shaffer,” and he convincingly goes head to head with each in his single objective “to gain a deeper understanding of two of the greatest composers in history — a deeper understanding of them not only as supremely gifted creators but as fellow human beings.”

The book’s 15 numbered chapters are divided unequally, with nine devoted to JSB and his works (including Marshall’s magisterial survey of Bach’s keyboard music, first published in 1994, and here provided with a 2019 postscript), two to Bach’s sons, two directly relating Bach and Mozart, and one a significantly expanded 1997 review of the film version of Shaffer’s Amadeus. The last chapter surveys the surprisingly large number of incomplete torsos, ranging from “the briefest jottings” to “substantial portions of incipient masterpieces,” among Mozart’s works, with pithy observations on what that proportion can tell us about Mozart’s compositional process.

An epilogue, “Had Mozart Lived Longer: Some Cautious (and Incautious) Speculations,” opines that “it is not altogether outlandish to imagine” that, about the time of the second Napoleonic occupation of Vienna, Mozart, a liberal thinker and devoted Freemason, might well have “received an invitation from his old acquaintance and best librettist, Da Ponte, asking him to join him in the New World to help establish an Italian opera in New York,” where he might have “decided to remain . . . enter[ing] the groves of academia, becoming Da Ponte’s colleague at Columbia University and respectably ending his days as a professor of music — his first regular job.”

One finds throughout the book many similarly quotable aperçus. Many of the chapters are reprinted almost verbatim, but some have been significantly expanded, and in others the already characteristically incisive prose has been further refined. In Chapter Six, contrasting the “minimalist” and “traditionalist” approaches to performing Bach’s choral music, Marshall proposes that “the size of Bach’s ensemble was far less fixed than either camp has been willing to acknowledge but varied substantially according to the circumstances.” This is a welcome retreat from the “hard-line traditionalist” interpretation Marshall had previously — perhaps goaded by the publishers — espoused in the pages of High Fidelity magazine and the Musical Times in the years immediately following Joshua Rifkin’s deliberately provocative presentation at the American Musicological Society’s 1981 meeting of his one-on-a-part theory (illustrated with excerpts from what was derisively termed “Bach’s B Minor Madrigal” performed by his Bach Ensemble, of which I was then the cellist).

The oldest essay is offered as a prologue to the others and serves as the volume’s raison d’être. It addresses the question of whether the 18th century should necessarily be viewed as an arbitrary calendrical period encompassing two distinct styles (Late Baroque and High Classic) or whether it might equally well be seen as the time during which the mature system of functional tonality, which could serve multiple purposes, uniquely prevailed before its gradual dissolution began. For Bach, “truth was beauty; that is, the aesthetic experience of beauty was the product issuing from the contemplation, or emulation, of divine order.” For Mozart, “beauty was truth: that is, the creation of beauty, understood as that which is pleasing (or “effective,” i.e., exciting to the senses) was the true objective or art.” And yet, “in the uncompromising, intricate stylistic and expressive musical idiom of Bach, Mozart . . . had come to recognize a hitherto largely unacknowledged and undeveloped part of his own musical personality.” Marshall helps us understand both.

Kenneth Slowik, artistic director of the Smithsonian Chamber Music Society and the Oberlin Baroque Performance Institute, took Robert Marshall’s “Music in the 18th Century” survey and participated in his Bach seminars while a student at the University of Chicago in the mid-1970s.