This formidable volume is an accompaniment to a manuscript containing the largest collection of Medieval motets and an important source of 13th-century polyphony, the Montpellier Codex (henceforth, Mo). Featuring 16 chapters, the authors and editors focus on the final fascicle, engaging with the contents and contexts by questioning its historiographical significance and contributions to 13th-century motet repertoire and influence upon later centuries of polyphonic music. 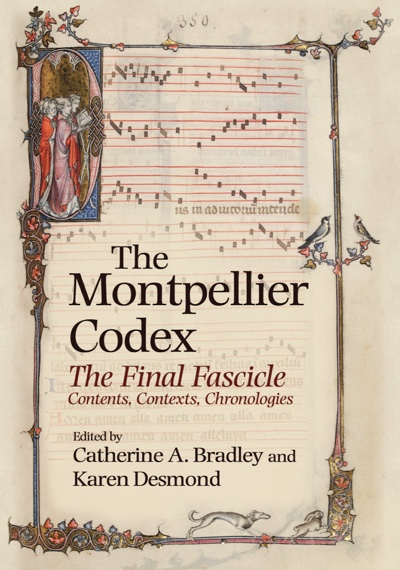 After an introduction that beautifully explains the significance and contents of the manuscript in general, and of the eighth and final fascicle in particular, Mark Everist’s first chapter dissects the anatomy of Mo fascicle 8, with the goal of shedding light on its contents, contexts, and dating, summarizing the earlier scholarship and findings in a manner that is clear and accessible to non-specialists and specialists alike. Everist is particularly interested in chronology: which pieces appear in the eighth fascicle that might have been treated differently from earlier fascicles of the Mo manuscript or which are reproduced in other manuscripts of the period. Everist also explains the relationship of Mo to specific motet types, such as Petronian motets, confraternity motets, and English motets.

In the second chapter, Sean Curran deals with the paleogeographic implications of Mo and explains their usefulness for the dating of the eighth fascicle. Curran begins with a summary of the relevant scholarship and then delves into how data analysis and comparison of scribes’ scripts can shed light on the chronology of the manuscript. Similarly, the third chapter by Alison Stones focuses on the style of the images and how the selection of images suggests a dating of the manuscript for the early 14th century. Rebecca Baltzer’s fourth chapter also deals with illuminations and their stylistic intricacies and origins, again placing the dating of the manuscript to the early 14th century.

The topic of Oliver Huck’s fifth chapter is about the production of the manuscript, but on the layout of the motets. Huck demonstrates that the manuscript re-conceptualizes the tenor and therefore polyphonic music, presenting the tenor in closer proximity to the motetus and giving both parts equal importance. Eva M. Maschke’s sixth chapter deals with two different polyphonic settings of the monophonic trope Deus in adiutorium intende laborantium, examining aspects of its transmission through polyphony.

Anna Kathryn Grau’s chapter 7 explores clusters of connected motets, arguing that their shared thematic, liturgical, and structural themes point to possible origins and transmission patterns of the works through different Medieval manuscripts. Karen Desmond’s eighth chapter discusses the rhythmic, textural, and stylistic groupings of the motets, illuminating the stylistic multifaceted characteristics of motets in the collection and for the period, while David Maw’s chapter 9 investigates the Petronian compositions and their experimental influence in the fascicle. Mary E. Wolinski’s tenth chapter continues such detailed investigations with the rhythmic ingenuity of Mo 8, and Solomon Guhl-Miller’s eleventh chapter connects Maw’s investigations in chapter 9 with the characteristics of music transitioning from chant into polyphony.

The twelfth chapter, by Anne Ibos-Augé, investigates refrains and motets that quote other motets from earlier fascicles, demonstrating how the motet composers knew the music copied in the previous fascicles and the broader tradition of motet writing. The final four chapters are more in-depth analyses of select traditions, with Dolores Pesce writing on tonality and the PORTARE chant segment; Margaret Dobby on the repetitions, rhythm, and rhetoric of the Mo codex; Rachel Davies on the Alma virgo virginum/Benedicta es, Maria; and Edward Breen on the performance and reception history of On parole/A Paris/RESE NOUVELE.

Dobby shows how the two motets discussed in her essay stem from similar rhetorical intentions by the composers, while Pesce argues for the tonal coherence of the PORTARE chant and Davies illuminates the liturgical contexts of the first motet in Mo 8. Breen then situates the eighth fascicle within 20th-century performance practices, looking at four recordings that try to recreate Medieval acoustics and vocal sounds.

All in all, The Montpellier Codex: The Final Fascicle is an illuminating and engaging volume, with discoveries not only beneficial for early musicologists, experts, and performers, but also for connoisseurs of early music and others curious about the traditions, transmission, and performance of music in Medieval France.

Samantha Bassler is a musicologist of early-modern English music with particular interests in cultural studies, disability studies, gender, and reception history. She is an adjunct professor of music at New York University and Rutgers University at Newark and the owner of a piano studio in Brooklyn, NY.