Book Review: Rumi, Music, and Mysticism from the Ottomans

Rumi and his poetry have received wide attention in the West over the past few decades. Inevitably, some of that attention has focused on the Sufi order that was inspired by his poetry and took its name from the famed poet himself, the Mevleviye. While scholars have devoted some overdue attention to the master poet himself, the order and especially its musical ceremony—despite their rise in popularity—have not been as well studied. This book, Walter Feldman’s most recent, is the author’s latest attempt to fill this gap in scholarship. 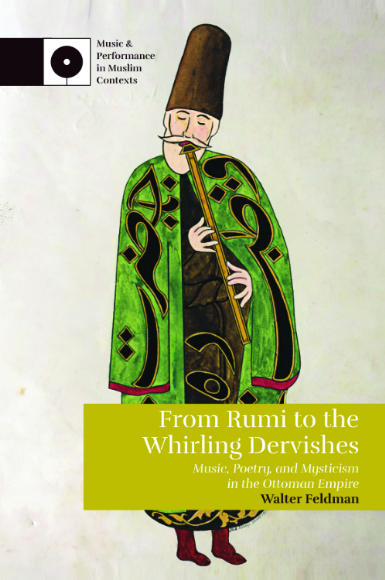 The book is divided into two parts. Part I focuses on the history of the Order and its socio-cultural significance in the Seljuk and Ottoman urban culture. Feldman argues that in order to understand the role of music within the rituals of the Sufi order, we must differentiate between its religious and mystical aspects and emphasize the latter’s role in creating the Order’s rituals, chief among them the Ayin or Mukabele ceremony.

Furthermore, while there are similarities and connections between the practices of the Mevleviye and other Sufi orders, we must not conflate them with each other. Even though Rumi’s own Samāʻ—the musical séance of Sufi traditions—was probably more spontaneous and similar to other Sufi musical sessions, the Mevleviye gradually moved away from such practices and embraced a ceremonialized musical session more befitting of the Order’s elite and literate urban membership.

In fact, while the Order was initially founded in Rumi’s own city of Konya, by the 17th century it had mostly moved to Istanbul, with many of the descendants of Rumi himself taking up leadership roles in the Mevlevihanes (Mevlevi establishments) of the capital. Until the Order’s ban in 1925, Istanbul remained the intellectual center of the Order’s ceremonies and activities.

The dance performed during music sessions has also changed significantly from the time of Rumi himself. While earlier practices probably reflected shared Sufi rituals of Anatolia, later practices unique to the Order were solidified in the 15th century. Still, what was practiced in the 15th and 16th centuries bore little resemblance to its current style and postures. It was only in the 17th century that many of the dance’s famous features came to be solidified.

In these symbolic representations, the ney (an aerophone musical instrument) came to play a unique role within the Order that benefitted both the instrument and the Order’s standing in the society. The instrument owed its popularity among the Mevleviye to its symbolic use in the poetry of Rumi itself. This popularity allowed the instrument to survive the crisis that Ottoman music experienced in the 19th century. At this time, a mixed music with a lighter tone created with popular audiences in mind was introduced to the Ottoman society. In this new music, many traditional instruments either lost their place to novel instruments with higher versatility or underwent significant changes to accommodate for this change of taste—with the exception of the ney. This was because ney players were still sought after and employed in Mevlevihanes in Istanbul. Furthermore, when Sufism was banned in Republican Turkey in 1925, many elements of the Mevlevi rituals were preserved in the instrument’s repertoire, because the instrument per se was not banned.

Part II of the book shifts its focus to the music of the Mevlevi Order itself, beginning with an examination of the scientific treatises written by the members of the Order over the centuries. Feldman argues that the musical knowledge of Anatolia, and the Mevlevi Order in particular, was under the influence of the Persianate tradition of the Timurids and Safavids. As such, the developments in that domain—positive or negative—affected the pursuit of musical knowledge among the Mevleviye. Feldman follows this with a brief overview of the Ayin. Ayins had a singular composer, consisted of many modulations, and repetition was not sought for the purpose of inducing trance. Rather, ceaselessly changing musical patterns was the norm.

The last two chapters of the book are dedicated to a musical analysis of different sections of Ayins, both in their rhythmic and melodic content. Feldman argues that certain elements of Mevlevi music demonstrate possible influences from pre-Islamic Turkic (mostly Oghuz) music as well as pre-Mevlevi Sufi musical practices, suggesting that the Mevlevis sometimes used older Anatolian Sufi hymns in their music making. Feldman enhances his analysis by providing examples in the form of notated transcriptions of music that are stored on a website accompanying the book. However, as a scholar of digital humanities who has seen many digitally enhanced projects rendered illegible because the book lost its domain name and/or server data, I am concerned that references to Feldman’s website might, in the future, provide nothing other than an “Error 404” message.

This technical possible pitfall aside, the book provides a long overdue and much appreciated study of the Mevlevi musical material and culture. At the same time, a two-hundred-and-forty-page long book is bound to only touch the surface of a subject as deep and rich as seven hundred years of Rumi’s poetry, its impact on the Mevlevi Order, and the musical practices of the famed Sufis.

Nevertheless, it opens numerous avenues of inquiry for future scholarship. For instance, one might ask what the intellectual relationship of the Ayin and the Mevlevi Order was with other intellectual trends in the Islamic world, particularly Hikmat/falsafa. Other future avenues of inquiry include the relationship between the Order’s poetic developments with the broader developments of the Persianate world. Feldman himself proposes some links between the Mevlevi poets and the Tāza guyī genre that was popularized in the Persianate world of the 16th and 17th centuries, but these links are left somewhat underdeveloped. Hopefully Feldman himself, as well as other scholars of the field, will fill the gap in our knowledge about the questions that the book has left unanswered.