It would be an understatement to say that at the height of his career, Robert Ballard (c.1572–c.1650) was fairly well known. He was tutor to the young Louis XIII, King of France, a noted lutenist, and a published composer. It certainly didn’t hurt that he belonged to the musical Ballard family; his father, also named Robert, was the Ballard of Le Roy & Ballard, the famed printing firm whose prestige stretched over three centuries. Adrian Le Roy was cousin to the family and was likely the younger Robert’s first lute instructor. 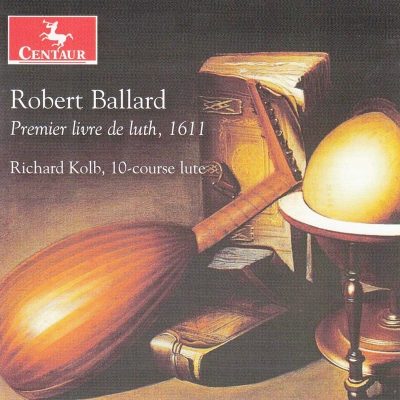 But the times changed, and Ballard’s star descended. Financial difficulties faced by the court caused a reduction in his salary, and by the 1620s, Ballard’s contrapuntal textures and fuller textures were starting to become old hat; the pieces published in his brother Pierre’s 1631 collection, Tablature de luth de differents autheurs, feel slightly out of place among the newer, more fashionable works. Nothing is known of his life after 1650, when he is last listed as a “King’s musician.” His renown today stems largely from his two early publications, 1611’s Premier livre de luth and 1614’s Diverses pièces mises sur le luth, although his music has only sporadically been recorded.

Richard Kolb takes major steps here toward correcting that historical imbalance. On what appears to be the first entire album dedicated solely to Robert Ballard, he performs 29 of the pieces in the Premier livre. Ballard ordered the works in this volume according to musical genre — including all of the popular dances of the day and arrangements of selections from popular ballets de cour — but left it up to the performer to arrange them to their tastes. Thus Kolb includes nine “suites” here, though ones favoring the newly fashionable courante that Ballard priorized.

Ballard’s works are tuneful and immediately pleasant, and so is Kolb’s approach. He plays cleanly and clearly, bringing out the contrapuntal inner voices and allowing the lowest registers of the lute to ring a little while never losing momentum on the main melodic material. Listen, for example, to Entrée no. 4, included here in the sixth suite, or the elegant Ballet de la Reyne from the first suite. It’s a resonant recording acoustic for this music, almost too much so for me; I have a mental image of the young king being soothed to sleep by such music in his bedchamber, hearing the same brush of fingertips and intake of breath that we hear here but in a space that seems too large to host such an intimate experience.

Each individual piece is a lovely little amuse-bouche, although Ballard’s emphasis on “elegant naturalness” may render a whole meal of his works a bit homogenous, as opposed to the later Baroque suite with its greater emphasis on variety and contrast. Perhaps for that reason, Kolb includes a lovely arrangement of some Bransles de village from Ballard’s second book; with their lower-voice ostinato and modally inflected melodic lines, they sound much folksier than the other, more courtly dances. Kolb is certainly to be thanked for bringing more of Ballard’s works to the fore. Let us hope that he revisits this material for us again soon.