Boston-based violist Laury Gutiérrez leads two ensembles known for smart and exciting performances of overlooked music. La Donna Musicale focuses on female composers from the Renaissance through Classical eras. Rumbarroco explores connections between Europe, Africa, and the Americas across centuries. With a wide array of musicians, styles, and vivacious rhythms, both groups combine the brains of a conservatory and the guts of a nightclub. There is considerable overlap in personnel between La Donna Musicale and Rumbarroco, but Latinas in Fusion is the first recording featuring both groups. 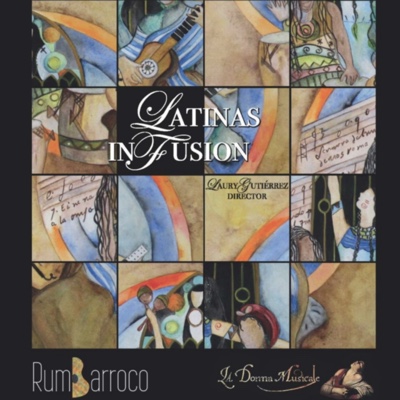 “Fusion” alludes to both the collaboration and the resulting music. A Spanish villancico shows rhythmic influences from Africa. Hildegard von Bingen’s liturgical songs are set to Cuban bolero-son. Contemporary composers expand on earlier Classical forms, and compositions are realized on Baroque and folk instruments. There is a lot of cross-pollination across the disc’s 14 tracks. Yet it always reflects actual cultural bridges, rather than experiments for the sake of novelty. Nearly 30 musicians in various settings turn these linkages into an energetic and spontaneous experience.

The transparency and vibrancy of period instruments suits rousing moments as well as intimate ones. Contemporary Venezuelan composer Diana Arismendi’s “Für Elena” for piano is arranged for Baroque chamber ensemble over a strutting salsa full of solos and topped by a Vivaldian violin cadenza. Modesto Bor’s Fuga 1 is here arranged for flute, gamba, harpsichord, cuatro, bass, and maracas in joropo step. The contrapuntal lines show sensitive interplay even amid all the intensity.

There are really too many highlights to cover here. Other standouts include Gutierrez’s gamba in passionate duet with Yi-Li Chang’s violin; bassists Kirsten Lamb, Luis Celis, and Victor Murillo taking turns to support and spur their colleagues on each track; Na’ama Lion and Diane Heffner’s colorful obbligatos respectively on flute and clarinet; and a bevy of percussionists using every instrument at their disposal for this grand rhythmic tour. That is only a woefully partial list.

Q Division Studios in Somerville, MA, captures the energy and atmosphere with balance and clarity; even the most hip-shaking moments don’t simply boom through speakers. Gutiérrez’s erudite liner notes guide the listener through the byways of music, history, and geography. There’s nothing like hearing La Donna Musical or Rumbarroco live. Yet this album distills what New England audiences have appreciated for years.

Listen to excerpts from Latinas in Fusion.

Andrew J. Sammut has written for All About Jazz, Boston Classical Review, The Boston Musical Intelligencer, Early Music America, the IAJRC Journal, and his own blog. He also works as a freelance copyeditor/writer and lives in Cambridge, MA, with his wife and dog.