Francesco Durante (1684–1755) cuts a unique figure among 18th-century Italian composers. He didn’t write operas, wasn’t a virtuoso performer, and worked mostly as a teacher. After studying with master opera composer Alessandro Scarlatti in Naples, near his hometown of Frattamaggiore, Durante traveled north to learn the Roman church style. He also published much less than his often prodigious countrymen. Still, sheer musical expertise made Durante one of the most esteemed composers of the Neapolitan school. Durante’s students included many leading lights of opera, from Pergolesi to Sacchini, while his modest body of mostly sacred pieces earned him royal commissions and critical admiration. 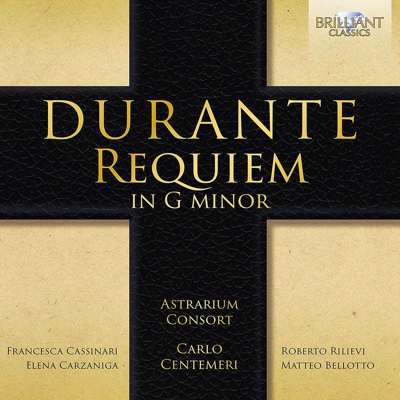 The Requiem in G Minor survives in several copies, some printed up to a hundred years after its 1738 premiere, indicating that it stayed in the repertoire for several generations. Milan-based conductor-organist Carlo Centemeri and his Astrarium Consort now bring it to modern audiences in this premiere recording. This work will likely surprise listeners used to Neapolitan sacred music that sound like operas on an altar. Instead of ornate arias and theatrical orchestration, Durante sticks to polyphony, chant, and tight canonic writing scored for just soprano-alto-tenor-bass, continuo, and an optional pair of violins.

Durante’s smooth melodic touch adds an immediacy to the learned stile antico techniques. He also deploys these comparatively small forces stirringly in suspensions and dissonances that animate key points of this well-known text. Instead of despair at the loss of life in this world, this requiem conveys mystery about what awaits the departed in the next realm. The titular opening phrase hangs in the air, only to fall away and heighten the uncertainty. Pauses between descending phrases and echoing lines in the “Dies Irae” evoke frozen fear rather than outright terror. Madrigal-like lines also emerge throughout the piece that offer melodic and textural contrast as well as an unnerving sensation when they’re swept up into the choral figures.

Durante didn’t prescribe the size of the vocal forces, and Centemeri hears moments in the score that seem to call for a soloist rather than a section. His choice of one voice per part clarifies musical and textual lines without any loss of gravity. In the “Sequentia,” the four voices continuously trade the question “What then shall a wretch like me say?” to suspenseful effect. Repeated notes in the “Kyrie” evoke trembling and belie both the Astrarium Consort’s small size and Durante’s modest scoring. The one-voice-per-part arrangement also illuminates a variety of vocal combinations, like tenor Roberto Rilievi backed by soprano Francesca Cassinari plus contralto Elena Carzaniga during “Ingemisco tamquam reus” or bass Matteo Bellotto closing the “Liber scriptus” with a question only to be answered by Cassinari in the “Judex ergo cum sedebit.”

All four vocalists sing cleanly, expressively, and with utter respect for the music. They combine into a vibrant choir but never overwhelm Durante’s writing. Centemeri’s direction and tempos also highlight the composer’s craftsmanship; for example, the crawling tempo of “Libera Me” making for a contemplation on the supposed freedom of death. Subtle variations in continuo instrumentation also add interest, such as dropping down to a lone theorbo or the prominent organ tones under lyrics of supplication in “Oro suplex.” The Astrarium Consort fulfills a mostly accompanimental role, but they also expand the texture and mood in driving sections like the double-time “Domine Jesu Christe.”

Two organ interludes, well-paced and thoughtfully articulated by Centemeri, serve as reflective interludes. While Durante’s manuscript indicates that the two violins are optional, they add a plaintive tinge to lines like “as foretold by David and the prophet.” The sound from Milan’s Sant’Antonio Abate church is recorded with enough reverberance for a sacred atmosphere without dissipating the work’s lines or the singers’ artistry. This is an immaculate and convincing performance that demonstrates obvious knowledge and affection for Durante’s creation.