CD Review: Gems From The 15th And 16th Centuries

Thirteen years, eight albums, and two Grammy nominations is one impressive track record. Since New York Polyphony formed in 2006, they have not only lent their considerable talents to reimagining well-known works. The vocal quartet has also explored rarer repertories, recorded modern premieres of rediscovered pieces, and commissioned new compositions that probe the connections between old and new, medieval and modern. Their latest album is no different in that respect. Shifting backward from the Victoria Mass on their last album, Roma Aeterna, NYP hones in on the late 15th and early 16th centuries, in particular on the composer Francisco de Peñalosa (c. 1470-1528), whose Lamentationes and movements of his Missa L’homme armé are recorded here for the first time. 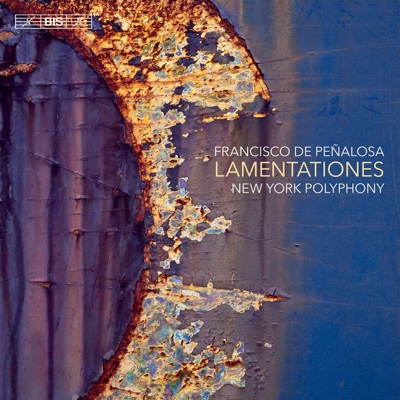 Other composers are present as well: Pedro de Escobar’s setting of the Stabat mater and two selections by Francisco Guerrero. Guerrero, like Victoria and to a certain extent their earlier contemporary Cristóbal de Morales (1500-1553), are fairly well known today, especially as representatives of the Spanish Renaissance. Peñalosa and Escobar (c. 1465-1535), however, have not exactly become household names. In no small part this is due to questions of survival; for Peñalosa, at least, it seems that some of his repertoire might have been lost, while issues of misattribution (usually to Franco-Flemish composers such as Pierre La Rue) have peppered the rest. Bass-baritone Craig Phillips also points out that, unlike other Renaissance repertoire perhaps better suited to today’s SATB choral arrangements, Peñalosa’s works are written idiomatically for men’s voices — so idiomatically, in fact, that Phillips has gone on record to state that it felt as if these pieces were written with NYP in mind.

I find myself in total agreement. The repertoire showcases the ensemble performing at its peak. Its approach is persuasive and utterly commanding. The vocal ranges in these works frequently highlight the lower voices (listen, for example, to the gorgeous opening of Escobar’s Stabat mater), and the ensemble as a result shines like burnished copper — rich, warm, and dark. The reduced textures of the Lamentationes and the cascading of the various segments of the famous “L’homme armé” melody from part to part feel like light shimmering off different parts of the same polished surface. The L’homme armé movements are absolutely stunning; recording the other movements not included here would require additional voices, which NYP set the precedent for on their recent recording of Palestrina’s Missa Papae Marcelli, so I can only hope that a future project will include Peñalosa’s full Mass.

Similarly, each of his motets, and again the Escobar, is a gem, so much so that I find myself not gravitating as much toward the two selections by Guerrero, lovely as they are. Given how few of Peñalosa’s and Escobar’s works survive, I would love to see the ensemble devote itself to recording the whole lot, and almost wish that more of their works would have been included here at the expense of the Guerrero. On the whole, though, it’s a fantastic new album.