Violinist Carol Lieberman has been a prominent figure in the musical life of the Boston area for some 50 years. An early adopter of the baroque violin, she formed the Lieberman Kroll Duo with harpsichordist Mark Kroll in 1969, but has maintained a busy dual career as a modern violinist as well. 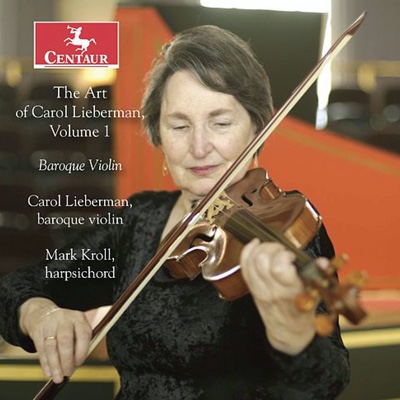 Centaur Records’ two-CD set The Art of Carol Lieberman documents both sides of Lieberman’s wide-ranging musical personality in selections reissued from recordings dating from 1975 to 2008. As Kroll, EMA’s book editor and Lieberman’s husband, explains in the liner notes, the impetus for this compendium of performances “comes not from the violinist herself, a performer whose artistry and virtuosity are surpassed only by her modesty. Rather, it has been compiled at the urging of the people who have loved and admired these recordings, several of which were made on LPs and are no longer available.”

The earliest recording on Volume I preserves a performance of LeDuc’s Sonata in D, Op. 1, No. 1, made in 1975. The most recent, Biber’s Sonata VI from his 1681 collection Sonatae á Violino Solo, in which Lieberman and Kroll join gambist Alice Robbins, dates from 2000.

As might be expected, this musical scrapbook shows a progression from earlier to later performances, paralleling the evolution of historical playing styles over several decades. While Lieberman and Kroll play with superb accuracy and ensemble throughout, as time marches on both players relax into their roles, becoming more flexible with rhythm. Lieberman continues to play with her signature sweetness of tone and perfect intonation, but gradually tempers her vibrato, using it less as a constant and more in the service of musical expression.

The repertoire of Volume II lies outside the official borders of early music, but two little-known works for violin and harpsichord should interest performers on those instruments who are looking for more modern pieces to play. Hovhaness’ Duet for Violin and Harpsichord is a tiny, three-movement work that spices up old forms with acerbic comments from the keyboard. (At only 25 seconds in length, its “Haiku” could make a perfect encore.) And the outer movements of Piston’s neoclassical Sonatina are exuberant romps that frame a mildly atonal Aria.

While it seems a bit unusual to include only three selections from Messiaen’s Quatuor, the “Louange à l’Éternité de Jésus” ends this attractive retrospective on a timeless note, allowing Lieberman’s gorgeous tone to sing forward into the great beyond.