This is definitely a CD to admire. Whether it is a CD to entertain will depend on what you are looking for. 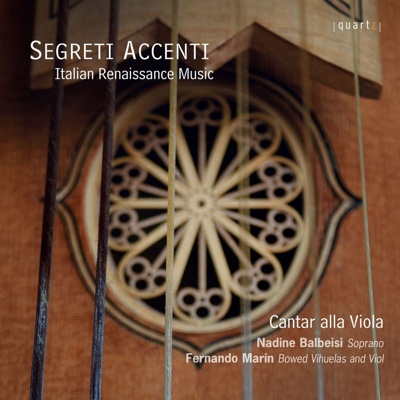 As documentation of an almost-lost practice of the Renaissance — how to take a multi-part vocal work and play it with just a solo voice and a viola da gamba — it is worth its weight in gold. You won’t get tired of the gleaming voice of American-Jordanian soprano Nadine Balbeisi nor fail to admire the deft realizations of the other lines by Valencian gambist Fernando Marín. And there’s the added appeal of Marin’s instruments made by Javier Martínez: a 14th-century style viella, two sound-postless vihuele di arco of different sizes, and a copy of a 16th-century John Rose viola da gamba.

If the goal is to appreciate “all the sweetness” that is found in the solo voice (as Castiglione’s Book of the Courtier says of “cantare alla viola”), then goal accomplished.

But something is missing, and it’s not really the performers’ fault. These are mostly works by Luca Marenzio and Costanzo Festa whose full effect may depend on the combined harmonic strength of the different voices, their articulation, blend, etc., together with crescendos and decrescendos and other vocal techniques. For the most part, the solo soprano line was not conceived to hold your attention by itself, and in these realizations, the lines played on the viol don’t have the same synergy with the soprano as other voices would.

Our appreciation is not helped by the lack of words in the accompanying booklet, although the background for the realization of these pieces is well-explained and the instruments well-described.

That said, there are a number of cherishable moments:

So, if you want to feel like a fly on the wall in a private home where these two wonderful artists are making music, it’s a wonderful feeling. But if you imagine yourself as a concert manager who happened to drop in, your first thought might not be to take this act on the road.