This release is far from the first performance of Bach’s Goldberg Variations arranged for chamber group and likely won’t be the last, but it will be a tough act to follow. 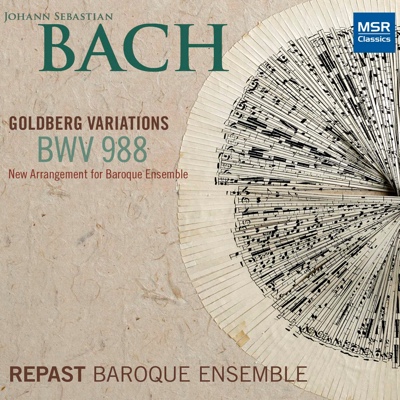 New York’s Repast Baroque Ensemble comprises violinist Amelia Roosevelt, cellist Katie Rietman, bassoonist Stephanie Corwin, and harpsichordist Gabe Shuford. Roosevelt explains that they always ask Emi Ferguson to join for any repertoire with flute, and it shows. These performances bubble over with the energy and warmth of a celebration for five friends who just happen to be incredibly knowledgeable and sensitive students of Bach’s music.

Bach composed his beloved and inventive aria and 30 variations late in his career. Their technical challenges, emotional range, and structural genius have inspired entire dissertations as well as hundreds of recordings — all for a work originally intended for just solo keyboard.

Repast’s imaginative arrangements take Bach’s already wide-ranging variations through a wealth of instrumental permutations while getting to the heart of each segment’s affect and style. The full ensemble turns Variation 16 into a true orchestral French overture: an atmospheric, Rameau-esque slow section followed by a fast one with the courtly momentum of Versailles and the organic interplay of a New Orleans frontline. Variation 15, without harpsichord, is a deliciously dour and spacious canon. Variation 27, written without a bass line, turns into a seamless duet between violin and cello. The lengthy and haunting Variation 25 is perhaps the best known in the set. Here, Rietman switches to piccolo cello alongside the bassoon’s tense high register, and the pair intone within striking distance of Roosevelt’s plaintive lead. Variation 6 finds Roosevelt’s viola spinning a juicy texture.

Several movements feature a sonata-style format with single instrument and harpsichord. They strengthen the contrapuntal lines and melodies even further, and sometimes assign some unique instrumental roles; for example, when the double-stopping violin handles the dotted bass line in Variation 26 and lets the harpsichord loose in rapid-fire runs. Variation 13, a slow earnest saraband, spotlights the guest flutist: utterly natural in phrasing with ample colors, from bright yet expansive soprano piping down to dark tenor puffs. Variation 21’s canon, for violin and harpsichord, flows with such directness and transparency that it seems like an undiscovered obbligato sonata. Everyone gets a solo feature with the exception of Corwin’s bassoon, but she’s an integral voice in Variation 10’s mercurial fugue and makes an event out of Bach’s bass lines in Variation 3.

A third of the tracks feature Shuford alone at the harpsichord with consistently tight and lively accounts of Bach’s contrapuntal displays and cross-hand showpieces. From the opening aria, his uncluttered phrasing and strong tempos capture the spitfire effect of Bach’s syncopations while maintaining melodic integrity. His touch on the descending arpeggios in Variation 11 has just enough release to keep things spry without turning monotonous. Variation 17 (which Glenn Gould called “empty-headed”) turns the chiming upward phrases into a touching rhetorical question. Variation 5 exploits the timbral contrasts between registers on the lovely Blanchet model harpsichord made by William Dowd.

Beautiful sound captured at SUNY Stony Brook’s Staller Center for the Arts recital hall seals the deal for this album. This reviewer usually listens to the Goldberg Variations in parts. Repast’s rendition was easy to listen to in one sitting, on shuffle, grouped by similar instrumentation, according to mood, and in reverse order.

Andrew J. Sammut has written about Baroque music and hot jazz for All About Jazz, Boston Classical Review, The Boston Musical Intelligencer, Early Music America’s online and print editions, the IAJRC Journal, and his own blog. He also works as a freelance copy editor and writer while living in Cambridge, Massachusetts with his wife and dog.