Part three of a three-part series following Erin Lupardus on her journey as an American Fulbright Scholar studying Baroque cello in Europe.

On my 15th birthday, my mom gifted me a notebook with “Rambling Thoughts: What I learned in 2011” taped to the front cover. Tired of my typical teenage response to the question of what I learned in school on a given day (a long, exaggerated “I dunno”), she hoped that I would start taking notice of what I had learned and write it down in the notebook. Though never one to daily journal, I was excited by the project. Unfortunately, my tendency to become utterly obsessed with an idea for a month and then lose interest or never follow through meant I never filled that notebook with things that I learned in 2011, but it did later evolve into a list of happy thoughts, then lesson plan ideas, until eventually it transitioned into a mental record of such experiences. With the end of the official Fulbright grant period in June came a very necessary summer break to continue learning through summer courses and to process everything that happened during the school year. Of course, I learned a lot about baroque music, performance practice, and the Austrian education system, but the most important lessons I learned have both everything and nothing to do with music. After all, music is the audiation of the human spirit, and I believe my musical language has matured thanks in part to this small collection of memories on the list of What I Learned in Austria:

“Put your foot out there!”

On my very first day in Linz while anxiously trotting through the city trying to check errands off my never-ending to-do list, I stumbled upon a white tennis shoe-clad American couple trying to find their hotel. A joyous My people! reflex shot into my heart at the off chance of hearing American English out and about on my first day. Having just purchased an Austrian phone plan, I rushed over to offer the aid of Google Maps, practically buzzing at the opportunity to talk to people whom I could actually understand (the Upper Austrian dialect takes a lot of getting used to.) We made small talk, smiled, and laughed together as American strangers tend to do. I’ve come to treasure these rare moments of such open human contact as the Linzer crowd is generally more reserved and wants nothing to do with strangers. When I told the couple about my Fulbright grant, the wife excitedly exclaimed, “Oh, honey! You’re going to love it! Just put your foot out there and experience everything!” After sending them (hopefully) in the right direction, I decided to take her advice to heart. Throughout the year, I wrestled with my social anxiety and did my best to say “yes” as often as possible, not wanting to waste this precious opportunity. This chance encounter with two gracious strangers in my new host city perfectly set the tone for my new adventure.

Desperate to escape the miserable Austrian winter, I embarked on a solo trip to the Greek island of Crete during a week-long school holiday in February. After being warmly welcomed to my hostel by a surprise troupe of friendly musicians jamming in the lobby, I entered my shared room and encountered one of my new roommates, a tall Greek man named Efe. Efe preferred speaking German over English (and I certainly didn’t speak any Greek), so he was very excited to talk to someone with whom he could speak German. Because it was my first real solo trip abroad (I had traveled “alone” to the U.K. in October to visit friends), naturally I was a little bit more cautious than I normally would be, so I pragmatically rejected his repeated offers to go hiking or out into the city alone together and instead settled on dinner in the hostel on my last night. I asked him why he enjoyed talking to me so much but largely ignored the others in our room, and he told me it was because I smiled so much. Efe had been living in the hostel for a few months because of how difficult it was to find affordable housing in Chania, and I have to imagine that in such a transient place, he had been searching for some human kindness much like I had felt when talking to the American couple in Linz. I felt guilty for being so cautious of him and smiled as much as possible as if my dimples could heal his weary heart. He told me he worked at a church with teenagers and that every day he greeted them loudly and brightly and asked them to smile for him. “You can face anything in this world if you just smile,” he told me. He gifted me 2 local oranges (the best oranges I’ve ever tasted) from his own backpack and sent me on my way. I cried on the bus ride to the airport for having met such a beautiful soul.

I’m proud to be American.

For my last class of the year for one of the elective Advanced English courses I taught, I chose the topic of patriotism—one that I thought was sure to spur some interesting conversations, and boy, did it! After an intense discussion, I asked my students if they thought I was proud to be American. Although they all correctly guessed that I was, one was sure to tell me that he couldn’t seem to remember me having said anything positive about the U.S. as a whole in our lessons together. Though it’s certainly not against the “rules” of Fulbright to criticize your home country as we may express our own opinions freely, I was very disappointed in myself that the main impression I had given was a negative one because I am proud to be an American. I criticize certain aspects of America because I love America and hope for a better future for all. It’s easy to explain quantifiable issues such as the immense cost of American healthcare and education to my students, but it’s much more difficult to convey our un-measurable positives. Americans work ourselves to the bone and don’t give up easily. We lend a helping hand to those in need, even if they are a stranger to us. We open our hearts to others quickly and unconsciously. We are honest and independent and affable. I don’t mean to suggest that non-Americans lack these qualities, because that could not be further from the truth, but I have never felt more like an American than I have living in Austria. And I will proudly sometimes stick out like a sore thumb with my stubborn, smiley “Americanness” if it means honoring this identity and my home country.

Find joy in the simple things.

I experienced many ups and downs over the past year—chasing my dreams, culture shock, interacting with my students, imposter syndrome, music-making with new friends, loneliness, etc. To try to keep my emotional state as stable and healthy as is possible when constantly feeling like an outsider in a foreign country, I made a serious effort to try to stimulate joy by noticing the charming little snippets of the lives and scenes passing by me. A fluffy dog on the tram. Love-struck teenagers sitting together awkwardly on a public park bench. The way the Alps emerge through the fog on rainy days like a looming, friendly giant. An elderly couple dressed to the nine at Sunday brunch, saying nothing to one another, just enjoying each other’s company. Yellow wildflowers along the riverbank smearing into a blur through the quickly passing train window. An unexpected parting “Pfiat di!” (= “behüt dich Gott!” = “May God protect you!” = “Goodbye!”) in the countryside when a fellow diner leaves the restaurant. The adorable ease with which a small child with a squeaky voice sings in a complicated foreign language (their native tongue) to themselves. A jubilant eruption of “Erin!” when I enter a class of 12-year-olds who weren’t expecting a lesson from me. Emotions are fickle companions, but it is much easier to tame them with a little dose of perspective—beauty exists all around us, and therefore music exists all around us. You just have to take a breath and listen.

I’d like to thank the late Senator J. William Fulbright for spearheading this magnificent program and the collaboration of the U.S. and Austrian governments for funding my grant. I’d like to thank my wonderful colleagues and professors at the Akademisches Gymnasium Linz, the Stiftsgymnasium Wilhering, and the Anton Bruckner Privatuniversität for helping me to improve my skillsets in teaching and music-making. I’d like to thank Early Music America for the opportunity to share my experience with their audience. And lastly, I’d like to thank my friends on both sides of the pond and my loving family for their constant support and encouragement. 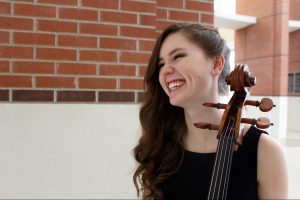 Having enjoyed performing in classical, contemporary, and Broadway settings, promising young cellist Erin Lupardus embarks on a newfound journey into the baroque world. While studying abroad in Vienna, she was enthralled by a Historical Performance Practice course and yearned to know more about this captivating chapter of music history. She received a Fulbright US Student grant to research baroque music and teach English in Linz, Austria for the 2018-2019 academic year.