Johannes Kepler (1571-1630) is best remembered for his numerous contributions to science. In his day, there was no hard and fast divide between astronomy and astrology, theology, or, on some level, music. Kepler believed that the harmonic organization of the heavens was mirrored on earth. As cornetto player Bruce Dickey succinctly explains in the excellent liner notes for his new recording, the more circular a planet’s orbit, the fewer tones it produced; therefore, Earth produces two pitches a semitone apart (mi-fa), while Mercury, as the most elliptical, produces many more. 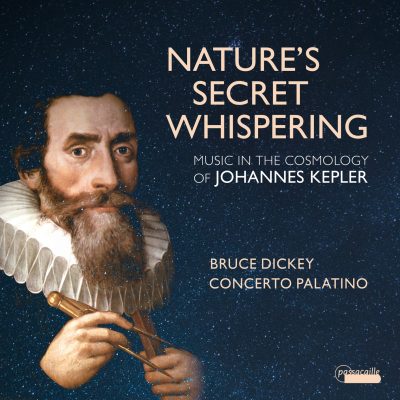 Kepler thought that the sum total of these sonic permutations creates all of the harmonies heard in music, although in the heavens such sound was inaudible to the human ear. The best polyphony of his day was the earthly counterpart to this music of the spheres, compressed into a duration perceptible to humans. Such music was pregnant with both cosmological and rhetorical significance, since musical intervals not only reflected heavenly harmonies but also human passions.

For Kepler, no composer achieved such cosmological perfection better than Orlando di Lasso, and so this album includes five of his works. His double-choir motet Tui sunt coeli, which begins the disc, symbolizes the division between heaven and earth, while his In me transierunt revolves around the Phrygian half-step that symbolizes Earth. As Kepler was aware of only six planets, the number six was especially meaningful, and several works here are for six voices (see Andrea Gabrieli’s Emendemus in melius) or prominently feature an interval of a sixth (such as Lasso’s Si coelum et coeli coelorum).

All in all, the album includes 15 works by Kepler’s contemporaries, most of whom he knew personally; joining Lasso and Gabrieli are Annibale Perini, Lambert de Sayve, Erasmus Widmann, and Hans Leo Hassler. There is also one modern work inspired by Kepler’s theories: Calliope Tsoupaki (b.1963), the 2019 composer laureate of the Netherlands, contributed Astron, based on an Orphic hymn to the stars.

If I may be permitted a small pun, the renowned ensemble Concerto Palatino is in stellar form here. They simply glow in the all-instrumental selections, the warm acoustic perfectly highlighting their rich, graceful approach. When joined by the outstanding vocalists, it is occasionally difficult to distinguish between a long vocal melisma and Dickey’s supple cornetto — which, I suspect, is precisely the point. Listen, for example, to Andrea Gabrieli’s beautiful Deus misereatur nostri or to the concluding Regna triumphalem by Lambert de Sayve, a composer with whom I clearly need to spend more time, given his exquisite Miserere mei Deus, performed here a cappella.

While the tempo in Lasso’s Tristis est anima mea is much faster than I’m accustomed to, the ensemble wrings every drop of emotion from it with enviable conviction. Tsoupaki’s Astron, the album’s keystone, deserves special mention: The solos, both instrumental and vocal, are breathtakingly poignant, while the rest of the ensemble acts as a Greek chorus — foreboding, powerful, almost otherworldly. The album’s concept is innovative and exciting, its execution nothing short of superb.