A delightful selection of Italian violin sonatas is brought to life by Augusta McKay Lodge and her fellow performers. The legacy of Arcangelo Corelli as both a player and a composer is fully on show in this album named in recognition of his influence.

The very first note heard casts a kind of spell — an ethereal, suspended tone materializing out of nothing to introduce the plaintive Largo of Giovanni Mossi’s Sonata da camera in E minor. McKay Lodge wastes no time in sowing seeds of the melodic ornamentation that will grace her playing throughout. These seeds burst into full bloom halfway through the movement with some extroverted double-stopped extemporizing; there are striking harmonic tinges here, too, with unexpectedly exotic-sounding harmonic-minor motifs and minor-second clashes. 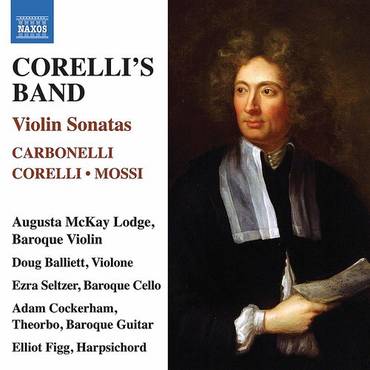 The exact formation used for the continuo in the time of Corelli and his fellow violinist-composers seems not to have been standardized, which McKay Lodge’s band takes as its cue to toy with a varied palette of continuo textures. The Corrente of that opening Mossi sonata has some pleasingly bell-like, Lautenwerck-esque sonorities from Elliott Figg at the harpsichord. Those minor seconds are back, too, in the form of a cheekily discordant chirping motif. McKay Lodge is not afraid to let a little “noise” creep into her sound, clearly relishing the slightly choppy sound of her staccato playing in these faster movements rather than trying to smooth off the edges.

The Carbonelli sonata that follows stands out, above all, for its utterly glorious second movement — an irresistibly catchy, punchy Allegro dominated by an almost ubiquitous sequential descending motif. Thanks partly to the driving tempo McKay Lodge and her players set, there’s never the least danger of this single motif’s recurrences becoming dull or repetitive. Indeed, one has the sense that they could quite happily have played this movement two or three times back-to-back without ever getting tired of it. A declamatory Largo ensues, punctuated by silences that further heighten its drama.

This collection of “tributes” to Corelli’s influential style would not be complete without an appearance from the master himself: A church sonata in C major sits at the heart of the album, featuring a pensive opening Adagio, an intense, invigorating Allegro (marked “perfidia,” a term denoting the non-stop nature of its figuration), and a concluding gigue in which McKay Lodge takes the innovative decision to emphasise the two-plus-two phrase-structure even at the cost of constancy in the pulse. On paper, this approach seems guaranteed to destroy the rollicking flow of the movement; far from it. Rather, it creates a sense of back-and-forth that might seem impossible with only one soloist; McKay Lodge manages single-handedly to create a dialogue with herself.

Many of the adagio movements throughout this album are underpinned, and enhanced, by the rich bass register of Adam Cockerham’s theorbo — a sonorous bass note here or there makes a world of difference to the sense of profundity, and Cockerham doesn’t disappoint. The penultimate movement of Mossi’s D minor sonata — the fourth work on the album — closes with a particularly enjoyable moment of glory for the theorbo’s lower register.

That being said, this is McKay Lodge’s album throughout. Double-stopping is central to this Corellian school of violin writing, and she tackles it fearlessly. No less impressive is her sheer stamina, dashing off extended passages of dense figuration with no audible difficulty. One gets the feeling, from the way she confidently places her final cadences like a winning hand of cards, that there isn’t a single taxing bar on the album she hasn’t enjoyed getting her teeth into — and it’s safe to say the same holds true for those of us with the rather easier task of merely enjoying the results.

David Smith writes as an early music specialist for Presto Music and performs as a singer with the English vocal group Ex Cathedra and as a lay clerk at St Philip’s Cathedral, Birmingham, UK.