Boston Camerata’s new album is dedicated to works from the late 1700s and early 1800s that “largely resist easy classification…[they are] neither ‘ancient’ nor ‘modern,’ neither ‘folklore’ or ‘classical’,” states artistic director Anne Azéma. 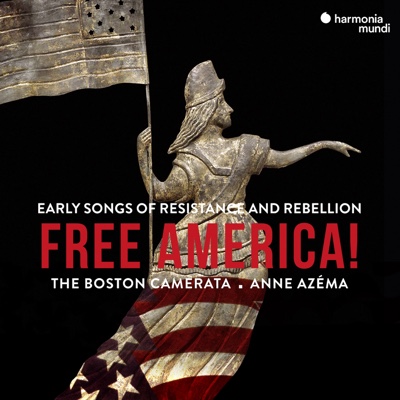 The premise of the recording is clear from its title. The 29 works all speak to the ideals, desires, and horrors of the American Revolution, and the subsequent attempts to create a New Republic. Many disparate voices pushed, in many ways, for the ideals of union, liberty, and democracy, for common purpose and belief, and for social harmony. The works included here speak to this diversity. Vocal works are culled from hymn books, Shaker repertoire, African-American spirituals, and collections of traditional ballads and patriotic songs. Interspersed throughout are instrumental works: military marches, dances, and jigs. All are drawn from a variety of early American manuscripts, prints, and publications, and also from compilations of earlier traditions published as late as the Civil War. An immense amount of research went into the making of this album.

The works are grouped thematically, with sections dedicated to the Union, the military, repentance, social justice, wealth, and freedom. The contrasts between topic, texture, timbre, and texts in these sections are quite engaging, and the ensemble is, unsurprisingly, in top shape: musically, it’s exceptional. Every selection is its own shining gem, though I find myself listening to “Saw you my Hero,” the setting of David’s Lamentation, the Shaker melody “Sanctum Te,” “My Body Rock ‘Long Fever,” and the gorgeous “Pretty Home.”

The program stems from a commission from the Philharmonie de Paris, but I cannot speak otherwise to the various logistical issues, decisions, or people that went into the making of the recording. Still, given the significant number of works drawn from African-American traditions, I would have appreciated the album even more had it included performances from, or collaborations with, African-American musical communities. It is all too easy, especially within the realm of early music, to think of the past as distant. But especially in today’s fraught climate, it behooves us to recognize the myriad, and occasionally terrible, ways in which the past is still very much present.

It is such a privilege to perform this repertoire, to be the voice for many of the voiceless members of America’s early years, and to do it as well and as widely as the Boston Camerata does. In the spirit of union that permeates the album, I would have liked to see the ensemble (and any others performing this repertoire) extend the microphone to living descendants of that often-voiceless past.

That said, the album has hardly left my rotation since I received it. It’s a magnificent and thought-provoking addition to anyone’s collection.