“My life is a pathway of sorrow;

I’ve struggled and toiled in the sun

with hope that the dawn of tomorrow

would break on a work that is done.”

Florence Price’s “Resignation” serves as the ideal opening track for American Originals: A New World, A New Canon. Exquisitely performed by the brilliant countertenor Reginald Mobley and the superb instrumental ensemble Agave,  Price’s music — and her words —  entice you to sit back, relax, and enjoy.

Released by Acis Productions, the recording is a direct response to this moment of cultural awakening on many fronts — including classical music. During the album’s 17 tracks, Mobley and the San Francisco-based group Aaron Westman and Anna Washburn, baroque violins; William Skeen, baroque cello and viola da gamba; Kevin Cooper, baroque guitar and theorbo; and Henry Lebedinsky, harpsichord, piano, and organ) craft a stunning playlist of neglected works by composers of color. 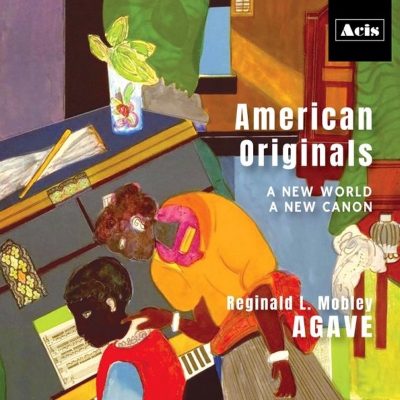 Part of the album’s beauty is its inclusiveness — musically and culturally. In addition to the eight art songs by Price, works by African American classical guitarist Justin Holland and ragtime composer Scott Joplin are featured.

For those who only know Price (1887-1953) through her large-scale orchestral works and as the first African American woman to have a composition played by a major orchestra, her art songs show her prowess for setting texts to music. They also reveal different sides of her personality.

In “Resignation,” we hear her contemplative side, while “Tobacco” (Four Encore Songs) is full of playfulness. That humor also works its way into Price’s arrangements of “Shortnin’ Bread” and “Oh My Darlin’ Clementine” from Negro Folksongs in Counterpoint.

The true standouts in the Price songs are the performances by Mobley and Agave, who embody all the emotions and sounds needed to deliver these works to their fullest effect. The countertenor’s strong, richly-hued voice is powerful in the high register, and he sings with immaculate diction and spot-on intonation. Coupled with impeccable ensemble, these qualities make the songs a joy to hear.

Mobley and Agave reveal another aspect of their musical souls during Cuban composer Castro’s solo cantata “Tú, Mi Dios, Entre Pajas” and Mexican composer Zumaya’s “Como Aunque Culpa.” Here, everything sounds second-nature. Each line has direction, and nothing is overly fussy or sentimental.

Agave enjoys their moment in the sun with two anonymous works — Canción para Dos Instrumentos and a Trio Sonata in F. But their rendition of Joplin’s Bethena, A Concert Waltz — a simple tune in 3/4 time — is a standout.

While all the music and performances on American Originals go a long way toward creating a canon for a new world, what it just might do best is to shine light on what a diverse society the New World is and has always been.

As Mobley writes in his program note, “classical music is not a zero-sum game: we can have the Mozart, Beethoven, Copland and Gershwin that we love, and also Florence Beatrice Price, Esteban Salas y Castro, Scott Joplin, Manuel de Zumaya, José Mauricio Nuñes Garcia, Justin Holland, et al., who represent four centuries of overlooked American composers. When we permit our national cultural experience to be richer, our cultural expression and our national identity are more in alignment, and everyone benefits. It is time for a new canon for a new world.”