CD Review: Music of Madness Suited to Many Eras

Ensemble La Notte has certainly had an adventurous existence to date. Founded in 2018 in England, they released their first CD of Vivaldi concerti for bassoon and recorder a year later, performed at the BBC Proms, and won the Town Hall Symphony Prize, to boot. Despite the pandemic that has ravaged the globe for almost two years now, they managed to prepare a second album’s worth of material, recording it in April of this year. The theme of the new recording is apt, all things considered: “La Folia” — madness. 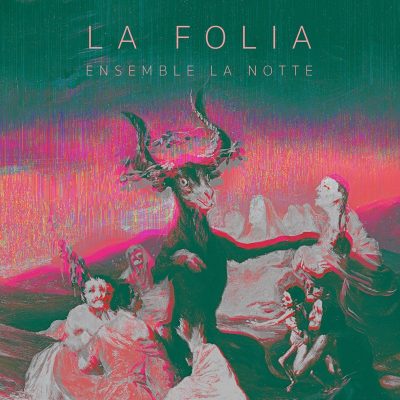 Most of the works on this recording were chosen for their titular or thematic references to madness, and they take the listener on quite the tour through Baroque ideas of chaos, fury, and the bizarre. The album begins with a massive, dissonant crunch: The opening sonorities of Jean-Féry Rebel’s “Le Chaos” contain all eight notes of the diatonic scale, repeated several times in a row with rising insistence, as if to startle the listener into attention — and it works. The disc unfolds from there, with graceful, sweeping dances leading into feverish, boisterous passages, and everything in between. Rebel’s “Chaos” is followed by his “Les Caractères de la Danse,” a one-movement suite featuring a host of dances, including a charming pastoral section. A trio sonata by Handel, despite having no overt connection to the theme of madness, has two slower movements that provide a nice contrast to the more frenetic material featured throughout.

The remaining selections are real standouts. The buoyant and increasingly busy variations of the “Diverse bizzarie Sopra la Vecchia Sarabanda ò pur Ciaccona” by London-based violinist Nicola Matteis beautifully showcase violinist Maxim Del Mar’s rich lower range. The two dances by Nicholas L’Estrange would have been performed as part of an anti-masque at the Stuart court; meant to stand in counterpoint to the order and refinement of the masque proper, they are full of quirky harmonic shifts, folksy melodies, and humorous ornaments, especially from Kate Allsop’s recorder.

As the album was released on the anniversary of the death of Georg Philipp Telemann, it is appropriate that one of his own trio sonatas would be included next, especially this one; its vivacious, sprightly concluding Presto shows the ensemble at its best. Henry Purcell’s “Dance for the Green Men” from The Fairy Queen comes next, a cheerful number featuring some dazzling imitative runs from the violin, recorder, and Mark Wilson on bassoon. Rameau’s “Les Sauvages” from Les Indes Galantes offers a more intense, dramatic contrast. The album suitably concludes with the eponymous “Folia” from Vivaldi, and I find myself repeatedly drawn to those moments where Wilson’s bassoon shines through the texture in lovely counterpoint to the treble instruments.

The ambience is occasionally just a bit rich for my tastes; at times, I wish for just a bit more thinness and transparency, a bit more breathing room to take it all in, but I also think I’d feel quite differently if I were watching this same program live — what fun that would be! On the whole, it’s a fun, enjoyable, creative, and well performed album, and I’m excited to see what’s next for this ensemble.