Johann Heinrich Schmelzer died of plague in 1680, only a few months after being awarded the position of Kapellmeister at the imperial court of the Holy Roman Emperor Leopold I. Schmelzer had worked for many years at the Hapsburg court, first as a violinist and composer for Leopold’s father, Emperor Ferdinand III, and later director of instrumental music and vice-Kapellmeister for Leopold. He was widely known as one of the best violinists in Europe, and was an influential composer of instrumental music, especially the violin sonata. 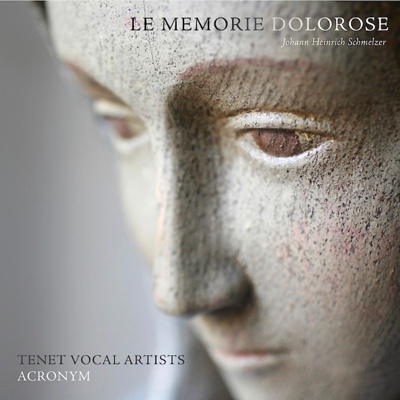 Yet Schmelzer, as an employee of the emperor, wrote music for all occasions, as befitting the needs of the imperial court. The Viennese court tradition for Maundy Thursday and Good Friday included performances of sepolcri, an oratorio-like genre staged with characters, scenery, and dramatic action in front of a replication of the tomb of Jesus. This album is the first recording of one of Schmelzer’s three sepolcri, Le Memorie dolorose (The Dolorous Memories), first performed on Good Friday in 1678 and containing two recitative-aria sections composed by Leopold himself. Also receiving their first recordings are two of Schmelzer’s instrumental sonatas, inserted into the sepolcro as tracks 13 and 23.

Le Memorie dolorose tells the story of the Passion and burial of Jesus from the perspective of various characters, including the Virgin Mary, the three Marys who were believed to have visited the tomb of Jesus (the Marys Magdalene, Cleopas, and Salome), Joseph of Arimathea, several disciples, and a host of angels. The sepolcro’s libretto, written by court poet Nicolo Minato (lightly edited on this recording to remove anti-Semitic references), pairs ten happy memories of Jesus’ life with ten sad ones, each pair sharing a central theme; the last, for example, contrasts the raising of Lazarus from the dead with the burial of Jesus.

The recording is luminous. The singers of TENET Vocal Artists, both solo and tutti, exude a sense of refined pathos and rhetorical gesture apropos for the work’s original intimate courtly setting. The instrumentalists of ACRONYM more than match them in emotiveness; the continuo is warm, resonant, and supportive, the full ensemble beautifully unified. The enthusiasm and sense of attack in the plucked strings, counterbalanced by the sweet melodic lines of the upper voices, and the full ensemble’s commitment to the different moods of each section, show the first interpolated sonata to be a real hidden gem.

In the pop-music world, a supergroup is a musical ensemble made up of artists well known for their other solo or ensemble work. Although named separately here, both TENET and ACRONYM are stars in early music. Both ensembles have consistently received the highest praise for both their engaging live performances and recordings, which have included everything from warhorses such as the Monteverdi Vespers of 1610 to premiere recordings of works by Biber, Valentini, and now, Schmelzer. This album is TENET’s sixth recording, ACRONYM’s ninth, but their first together, and the combination is nothing short of “super.” A highly recommended album, and may we hope that these two ensembles join forces again.