This is the first CD released by Sonnambula, and it shows. Like any ensemble making a recording debut, the musicians had to decide whether to assemble a grab bag of works to exhibit their impressive talents or focus on an interesting but overlooked slice of the repertoire, one that might get some special attention. They did both. 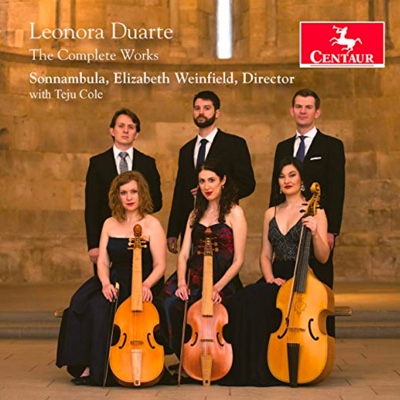 The disc promises and delivers the complete works of Leonora Duarte (1610-1678), the accomplished daughter of a prosperous Iberian converso jeweler who was resident in Antwerp. Her complete works consist of one set of seven five-part sinfonias for viols. These are mixed in with works of an English bent that might have been played by the members of Duarte family from parts in the library of their refugee neighbors, William and Margaret Cavendish.

It’s an intriguing concept, one that would be even more compelling if Duarte’s music rose to the level of extraordinary. I don’t think her goal in writing these sinfonias would have been to upstage the music of Alfonso Ferrabosco II (c. 1575-1628), John Jenkins (1592-1678), and John Blow (c. 1648-1708), or that of her likely music tutor John Bull (1562-1628). But she weaves a wonderful tapestry of sound, which is beautifully realized by Sonnambula’s ensemble of two violins and three viols.

Ferrabosco’s Alman in F is played as a curtain-raiser. Then the novelist and photographer Teju Cole, the Gore Vidal Professor of the Practice of Creative Writing at Harvard, sets the scene with an evocative essay about the Duarte family, spoken with his warm and inviting diction. A little suite for keyboard by John Bull — an In Nomine, a Pavane, and a Galliard, all in A minor — is sprinkled in among the other pieces for strings. They are rich and rewarding works, and Kennerley plays them exceedingly well. The high-point for me is Blow’s Chaconne in G, the penultimate selection, which outshines other works on the disc with its inventiveness, variety, and general pizzazz.

The disc closes with an outlier work from a century earlier: Pues que jamás olvidaros by Juan del Encina (1468-c. 1529). It was chosen, I’m guessing, to show off the singing of harpsichordist Kennerley. While he won’t erase anyone’s memory — if one is lucky enough to have such memories — of the vocalizing of Ray Devoll or Marius van Altena, his is a smooth and gratifying tenor that adds much to the scope of Sonnambula’s musical capabilities.

During the 2018-19 season, Sonnambula served as ensemble in residence at the Metropolitan Museum of Art. Listening to this disc, it is easy to agree with Capt. William Swann, who, after listening to the Duarte family in performance, wrote to the poet and composer Constantijn Huygens, “I doubt not but you will fynde great contentment by hearing them.”