There is something so inherently special, so idiomatic and immediate, about music written by singers for themselves. Such is true, at least, for Barbara Strozzi’s vocal works. 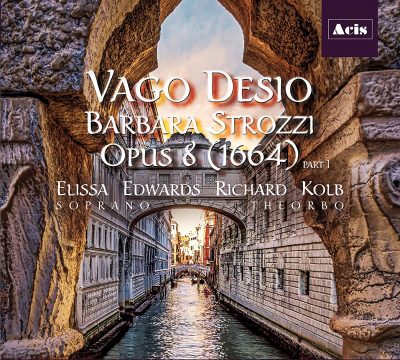 Strozzi, the daughter of Giulio Strozzi, studied with Francesco Cavalli and performed frequently at her father’s Accademia degli Unisoni, where she rubbed elbows with all of the local Venetian intelligentsias. Not only a talented singer, she embarked on a professional career in composition when she was around 25 years old, publishing her first volume of madrigals on texts by her father and dedicated to the Grand Duchess of Tuscany. The rest of her eight publications came along some years later, in part because she gave birth to three of her four children between 1641 and 1644, and also because she might have needed to compose professionally in order to support herself after her father died in 1652. She stopped publishing in her mid-40s, though she might have continued to compose; she died at the age of 58 in 1677.

Strozzi’s musical reputation has grown by leaps and bounds in recent years, no doubt in large part due to the foundational scholarship by Ellen Rosand in the 1980s, Beth Glixon in the 1990s, and numerous others since. In fact, Glixon notes that Strozzi might have been the most prolific composer of secular vocal music in her day, at least in her local area of Venice. The bulk of her compositional output consisted of solo cantatas and arias, though she published a volume of solo motets and a small few works for strings. As per the fashion of her day, the texts she sets tend to portray love, especially love lost, mourned, or scorned.

On this new album of cantatas and arias from Strozzi’s eighth and last publication, soprano Elissa Edwards soars in what likely was Strozzi’s own role as singer. The works themselves display Strozzi’s continued interest in both structured form and textual expressiveness; she flows between lyrical, arioso styles and faster recitative sections in order to heighten the meaning and emotion inherent to the text. Perhaps no other work here reflects this sense of dramatic tension and musical contrast as much as the first: “L’Astratto” tells the story of a narrator-lover who can’t quite find the right mode of expression to accurately convey his angst, and so spirals through a series of short arias in different musical styles.

Edwards wrings every ounce of pathos out of the mournful, chromatic “Non c’e piu fede,” warms her tone and adds the occasional flirtatious glissando for the sly wink of “Donne belle, è vanità,” and aptly conveys the empty hopelessness of lovesickness in “Che si può fare” — she positively inhabits the drama of the text in a way Strozzi would certainly have enjoyed, while Richard Kolb accompanies with both sensitivity and gusto. The heady emotion of the texted works is beautifully broken up by Kolb on archlute, who inserts two sets of correntes by contemporary composer Bernardo Gianoncelli.

It’s a wonderful recording that rewards both immediately and on repeat listening.