François Couperin was a musician’s musician. His chamber and keyboard works — the bulk of his output — showcase a power for technique and ornamentation that make the music more fun for the performer than the listener. Yet some musicians manage to find the lyricism locked within the burbling streams and eddies of Couperin’s sound.

One of them is the American harpsichordist Jory Vinikour, whose album L’Unique explores both the solace and urgency in the music of a composer remembered primarily for rococo-era worldliness. 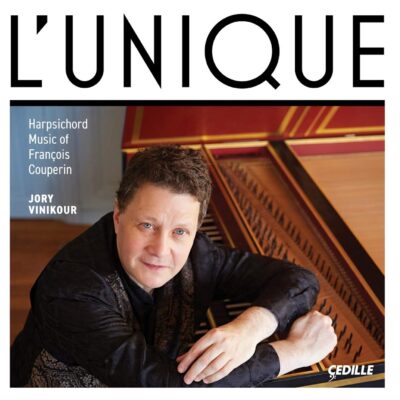 The disc brings together three “ordres” — suite-like arrangements — from Couperin’s Pièces de clavecin. Vinikour works through each with the finest detail, crafting elegant shapes from the harmonies and abundant embellishments that dot every page of the score. What emerges are performances that bring freshness and vitality to music that can, on the surface, seem opulent.

The “ordres” heard on this disc recall the forms of the French dance suite. Yet some movements offer descriptive titles ultimately meant to convey human emotions. Such character pieces, as Couperin called them, were as much metaphor as music.

The Huitiême Ordre stands as one of the composer’s greatest. Cast in B minor, the music of this collection involves a play between lightness and darkness. Vinikour deftly varies the timbre of his instrument. The “Allemande L’Ausoniéne” takes on a lilting urgency, while the “Sarabande l’Unique,” with its shifting tempo and meter, has the melodic arc of an aria. Vinikour even finds the expressive freedom in the brief “Gavotte.”

Other dances call for a virtuosic touch. The “Rondeau” moves briskly, and the imitative passages of the “Gigue” are handled with aplomb, the harpsichordist passing the phrases effortlessly between his right and left hands. Two atmospheric movements, “La Raphaéle” and the “Passacaille,” bookend this charming collection.

The Septiême Ordre involves a suite within a suite. Four works entitled “Les Petits Âges” explore the journey from infancy to adulthood. Vinikour treats each with warmth, as if he were painting a family portrait. The jovial “La Muse Naissante” captures the excitement of life’s beginning. That same feeling carries over to “L’Enfantine,” the ornaments highlighting the simple curve of the melody. “L’Adolescente” takes on greater strength and vigor before the tension fades in “Les Délices.”

Other works in the set have the improvisatory quality so essential to readings of Couperin. The music bounds freely in “La Chazé,” sounding resonant in the harpsichord’s warm middle register. In “La Basque,” Vinikour’s playing balances energy and elegance by turns, with figures that look ahead to Handel’s Harmonious Blacksmith variations. Under Vinikour’s fingers, the figures in “La Ménetou” course gracefully, as if the music is in search of a theme.

The pieces that make up the Sixième Ordre are short, likely owing to the music being set in B-flat, an experimental key for harpsichords of the day. But Vinikour lingers appropriately to give each reading a sense of intensity and grandeur. “Les Moissonneurs” and “La Commére” each take on regal pomp. The writing in “Les Baricades Mistérieuses” is handled with crystalline precision. Vinikour skillfully maneuvers the imitative strains of “La Bersan,” the timbre tipping towards light.

But here, too, the harpsichordist finds the tender sides of this music. Rubato shading in the gigue-like “Le Moucheron” brings extra lilt to the quick passages. His subtle keyboard touch teases out the melancholy in “Les Bergeries,” a piece depicting peasant life on the Île de France. Couperin’s music, this reading suggests, is most memorable in its intimate moments.

Aaron Keebaugh has written reviews and features for The Musical Times, Corymbus, and The Classical Review, for which he serves as Boston critic. He teaches courses in music and history at North Shore Community College in Danvers, MA.