Christina Augusta (1626–1689), daughter of King Gustavus Adolphus of Sweden, became Queen at the tender age of 6 due to her father’s death in battle. She was known as one of the most learned rulers of her era and deliberately built up the city of Stockholm as a center of education and erudition in the north. But at 28, she abdicated her throne, converted to Catholicism, changed her name, and moved to Rome, leaving her nation in financial and political turmoil. In her native Sweden, she was already highly educated in music, but such interests and activities grew exponentially once she settled into her new home in the Palazzo Farnese. 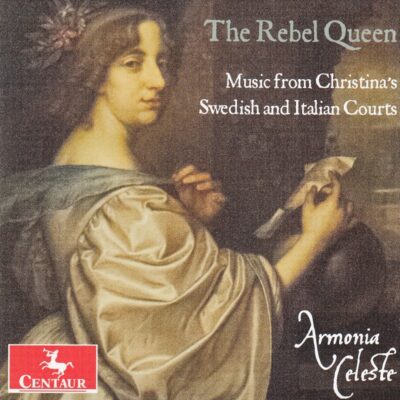 She became one of the prime movers in the local musical and theatrical communities, in part by forming the Academy of Arcadia, a weekly meeting of upper-class intellectual and artistic elites. She also became patron to numerous composers and performers, as well as artists and scholars in other fields; among the more well-known of her retinue today include Giacomo Carissimi, Arcangelo Corelli, and Alessandro Scarlatti.

On this latest release from the American early-music ensemble Armonia Celeste with three members of the Baltimore-based Pro Musica Rara, the musicians turn a keen eye and ear to works Christina would have helped to cultivate at court, chapel, and home. As befits the Armonia Celeste’s specialization in lesser-known repertory of this time, the album includes a number of composers not likely to be household names: Giovanni Marciani, Marco Marazzolli, and Vincenzo Mazzocchi. The latter two worked for members of the Barberini family, as did the better-known Luigi Rossi, while the aforementioned Carissimi was Christina’s own maestro di cappella. Interspersed between their vocal works are a violin duet by Lelio Colista, an anonymous lute toccata, and a sonata for harp and theorbo and a harp pastorale by Bernardo Pasquini.

Armonia Celeste is particularly well poised to tackle the latter, as one of its unique features is its inclusion of the rarely heard Baroque triple harp, played by Paula Fagerberg. In fact, one of the more engaging elements of this recording is the use of the harp as a continuo instrument for almost all of the vocal works; it imbues the album with a delightfully intimate ambience, especially for the works of harpist Marazzolli.

Another notable feature of the album is that all of these works are for high voices, apropos given that Christina was such an ardent supporter of female performers. The three vocalists blend superbly and with laudable sensitivity to the text; listen, for example, to the lovelorn languishing of the superb “Mio core, mio bene” (Marciani) or the calm piety of Carissimi’s “Benedictus Deus,” as opposed to the positively militaristic “Sdegno, campion audace” (Mazzochi), which is built upon the same short ground bass Monteverdi uses in “Zefiro torna.”

The instrumentalists are equally praiseworthy. Lyle Nordstrom holds down the fort with typical aplomb on lute and theorbo, his duet with Fagerberg on Pasquini’s sonata a particular standout, while the entire instrumental ensemble shines on Colista’s “La Chorista.” All in all, this is a recording that educates as much as it charms, and both are considerable.