Heinrich Wilhelm Ernst was considered a successor to Niccolò Paganini before Paganini was even gone. The Czech violinist (1812-1865) made a similar career as a traveling virtuoso across Europe. Admired by Berlioz, Chopin, Joachim, and Paganini himself, among others, Ernst also had a superhuman technique plus an expressive power that some said actually outmatched the Italian master. 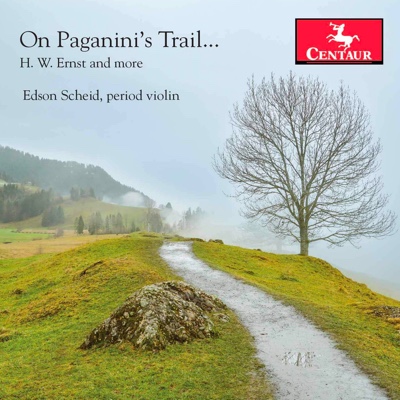 Ernst wrote some of the most difficult works in the violin repertoire, music that reveals formal and emotional variety beside all the flash, including the unaccompanied Six Polyphonic Studies and the Grand Caprice sur “Le Roi des Aulnes” heard on this release. This may be the first recording of these works on a period instrument. If not, it’s one of very few.

Brazilian-born, New York City-based violinist and American Baroque Orchestra concertmaster Edson Scheid plays a mid-19th-century French violin (maker unknown) with a modern bridge, tailpiece, and chinrest as well as gut strings and no shoulder rest. He explains over email that this is closer to the instrument a violinist would have played when the Studies were published. Scheid’s liner notes and performances point to obvious excitement at employing a period instrument and historical practices for this music.

Listeners used to more incisive, faster interpretations may at first be surprised by Scheid’s modest pacing. He takes his time through these works, letting them breathe without losing sight of execution or musicality, and setting up a unique miniature narrative for each study. His freedom with portamento adds warmth and character, for example, in the smirking first study and its leaping theme. Restrained vibrato clarifies polyphonic lines: The relaxed third study features a rich viola-like accompaniment, which then takes the lead and becomes its own longing tale of recollection.

There are fewer moments for Scheid to simply sing through his instrument, which is just the nature of these selections, but he still demonstrates plenty of personality. In the Grand Caprice (a solo-violin recasting of Schubert’s “Erlkönig” lied), Scheid becomes a one-person quartet with insistent bassetto strokes, mid-register chords, and an ominously choreographed melody. Once again, rather than slashing attacks or over-heated drama, Scheid’s expansive approach gives the well-known work an ominous feel.

At the other end of the emotional spectrum, in Paganini’s Introduction and Variations in G major on “Nel cor più non mi sento,” humorous echo effects and trills show good comedic timing. That is, of course, alongside shredding through ricochet bowing and other pyrotechnics.

Scheid also extracts a range of timbral possibilities from these showpieces. Gut strings open up a range of colors. His rapid double-plucking comes off like a well-tuned set of timpani. Raspy harmonics shows he’s unafraid to make a less-than-beautiful sound for the sake of textural exploration. At several points, he also pulls out rich, boxy strums like an acoustic bass guitar.

In Scheid’s own solo-violin arrangement of the third movement of Mozart’s Duo for Violin and Viola, K.423, the underlying viola part is still there, now stacked right next to the lead for an earthy texture. Scheid clearly has fun turning Mozart’s refined upbeat rondo into a winding chase with playful pauses and a range of articulations. It’s a logical finish for this program, with Scheid carrying on the tradition of transcription and expressive virtuosity.