This release emphasizes a side of Vivaldi that startles audiences as much as it impresses them. It includes the first recording of Vivaldi’s original edition of the famous titular concerto (RV 208), a longer version with even more virtuosic displays and technical challenges. 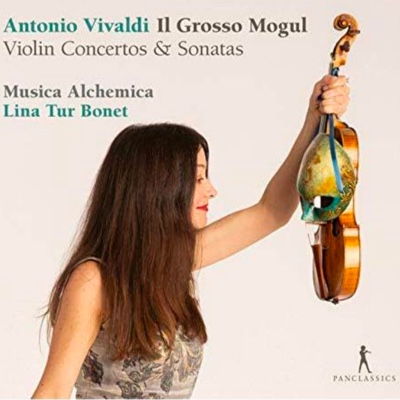 From the outset, Spanish violinist Lina Tur Bonet’s reading of this already fierce work is marked by sudden shifts in extreme tempos, aggressive articulation, brusque chords, and melodic sequences that emphasize drum-like fervor over subtle inflections. The middle instrumental recitative is more like a solo partita, and Tur Bonet adds some near-Romantic scoops into phrases and plunging descents. Things settle down slightly for the third and final movement with Tur Bonet’s singing upper register and carefully placed but prominent vibrato. Lengthy cadenzas make for gripping experiences, albeit more along the lines of a daredevil exhibition than a seamless narrative.

That sense of improvisatory flair continues for the less-frenzied but still intense rest of the program. The Concerto In G (RV311) features Tur Bonet on the violino in tromba marina, a three-string, part-brass violin with a metal resonator likely invented by Vivaldi. Its raspy timbre and sheer volume resemble a viola in the upper register played through a vocoder. The distinct tone suits Tur Bonet’s distinct energy. She dances through the rustic first movement and leans into the instrument’s scratchy edges. Yet in the slow central movement, she gets the instrument to lull — if not whisper — over a spare, aspirating orchestral accompaniment. She also sails through the rapid-fire octaves and the shifts between slurred and detached notes in the Concerto In D (RV 226). Her busy ornamentation in the second movement actually adds flow to the dotted-rhythm aria.

Musica Alchemica matches Tur Bonet in energy and blend, especially impressive given the soloist’s percussive phrasing and willingness to scrape for effect. They handle RV226’s rapid alternation between soloist and orchestra seamlessly. Their clicking thirds behind Tur Bonet in the second movement mine plenty of beauty out of a simple effect. At several times throughout the disc, the rich continuo, pizzicato strings and “thwap” of the bass lines generate stirring cross-rhythms.

Three sonatas for violin and continuo, recorded in 2013 with different musicians, make up the other half of the program. Tur Bonet clearly enjoys the brooding E Minor Sonata (RV17A), with especially evocative dynamics in the second movement. The Sonata In B Minor (RV 37) creeps and sneaks like a villain in one of Vivaldi’s operas. Continuo instruments entering and exiting in the third movement provide a novel and mysterious element. The Sonata in C (RV 4) starts with a noble, Corellian Largo, followed by a more characteristically Vivaldian Allegro alternating long phrases and showier passages. Tur Bonet’s notes point out that Vivaldi’s violin sonatas are often dismissed as academic works. She is obviously determined to show otherwise.

An excerpt from a concerto composed by Vivaldi’s pupil Johann Georg Pisendel and then edited by the master himself rounds out the program. The music indicates that Pisendel knew Vivaldi’s work well but adapted it to his own sense of symmetry and gravity. Musica Alchemica highlights Pisendel’s vibrant dialogue between the first and second violins. Both ensemble and soloist approach the student’s work with the same sharp attacks and heat. The recorded sound from both sessions is similarly up-close and personal, fitting these proficient yet wild performances.

Andrew J. Sammut has written about early music and traditional jazz for All About Jazz, Boston Classical Review, The Boston Musical Intelligencer, Early Music America, the IAJRC Journal, and his blog, The Pop of Yestercentury. He has also written and copy-edited liner notes for independently-produced historical reissues of jazz from the twenties.