Listening to Bach: The Mass in B Minor and the Christmas Oratorio. Daniel R. Melamed. Oxford University Press, 2018. 149 pages.

This is not a conventional scholarly book: There are no foot- or endnotes, no traditional bibliography (only a highly selective essay consisting of “Suggestions for Further Reading and Listening”), no musical notation (only references to audio examples available on an accompanying website). 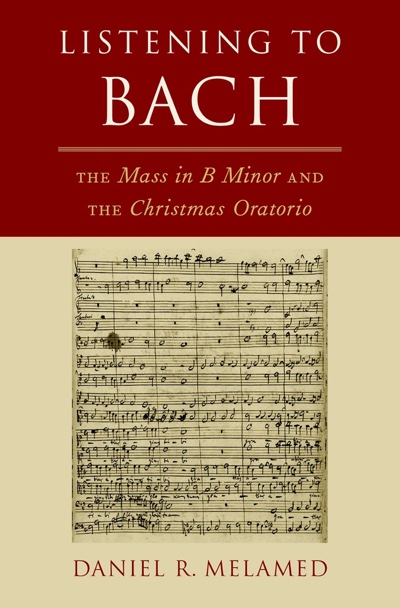 The explanation for these absences resides in the book’s title. As the author, Daniel R. Melamed, writes in the preface, “this book is called Listening to Bach, with an emphasis on listening…Most of its chapters are about the musical substance of the works [i.e., the Mass in B Minor and Christmas Oratorio] and the experience of listening to them.” The book, in fact, is a hybrid combining two genres: that of a scholarly work and the pedagogical genre of a music appreciation textbook, perhaps best described as a most richly, “historically informed,” music appreciation textbook.

Melamed insists that we “step away” from a modern obsession with the fact that a remarkably large number of the movements in both the Mass in B minor and the Christmas Oratorio are re-arrangements and re-workings of pre-existing music — a practice known in Bach’s time as “parody.” (The subtitle for one chapter reads “Is parody overrated?”). He argues, “We can get closer to an eighteenth-century understanding of these pieces if we step away from our fascination [emphasis added] with parody, origin, and genesis and listen carefully and in an informed way.”

But the fascination is irresistible — even to Melamed, who (ironically, perhaps) presents as detailed a discussion of the works’ genesis as can be found in any program notes, liner notes, or even many scholarly treatises. Two of the book’s six chapters are devoted to the topic. In addition to discussions of the music itself and the chapters on origins, a third major concern is the reception history of the two works, surveying the history of their interpretation, both in performances and in critical writings. Melamed has quite a bit to say about all of them, much of it provocative.

Returning to the issue of parody, assume for a moment that Melamed is right: Knowing the details of a work’s genesis does not provide meaningful insight into its aesthetic value — that that approach is a manifestation of either the “intentional” or “genetic fallacy.” Why, then, are so many of us so fascinated by these (marginal?) facts?

The answer, surely, is that when we are moved by a work of art — something created, after all, by a fellow mortal — we often find ourselves wondering: How did he do it? Strictly speaking, the answer belongs not to the disciplines of analysis or interpretation, but rather to the discipline of biography. Moreover, the two modes of inquiry — call them “work analysis” and “genesis studies” — at their best need not be mutually exclusive. They can be mutually reinforcing in the pursuit of an enhanced, more profound, aesthetic experience.

Consider a listener hearing the Christmas Oratorio for the first time. The work begins with five sharp strokes on the kettledrum alone. The unprepared listener wonders: Can all this be a work by the composer of the most intellectually uncompromising music ever written? Our listener will surely be both surprised and enlightened to learn that the explanation for the untypical and audacious opening of the oratorio lies in the fact that it originally belonged to a piece that began with the words “Tönet, ihr Pauken” (Sound, you drums). And then imagine the listener’s further surprise (and sense of revelation) if he were ever to learn that Bach’s decision to start the original work that way, while clearly inspired by the text, was an afterthought and a revision of his first, far more conventional, idea.

But enough quibbling. This little book packs quite a wallop. In fewer than 150 pages, it provides enlightening insights along with provocative, even unsettling, commentary regarding two of the most celebrated — and challenging — compositions to issue from the pen of Johann Sebastian Bach. In remarkably concise form, it surveys the historical and liturgical contexts to which they belonged and critically evaluates the scholarly, theological, and interpretive approaches they have stimulated from the time of their rediscovery in the early 19th century to the present.

None of that erudite display, however, is its main concern, which, once again, is to provide the modern listener with the skills and information necessary to gain a deeper understanding of the composer’s achievements in these towering compositions. The key is to give that listener the tools to recognize the stylistic and formal conventions informing the music and, especially, to recognize and appreciate the breathtakingly imaginative ways Bach deploys, modifies, and combines those conventions and genres throughout the two masterpieces.

Robert L. Marshall is Sachar Professor of Music emeritus at Brandeis University. His next book will be Bach, Mozart, and the Enigma of Genius: Essays on the Lives and the Music (University of Rochester Press).