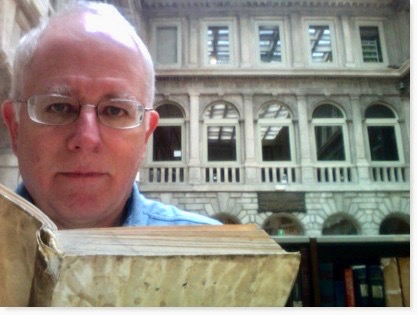 Nick Jones taught English literature at Oberlin College for forty years, specializing in Shakespeare, Milton, and the British Romantic poets. Recently retired and living in Berkeley, California, he and his wife Sue are avid participants in the East Bay early music community. Nick is a singer, violinist, violist, and recorderist, and is learning the viola da gamba. Nick was a music reviewer for seven years (on ClevelandClassical.com) and now writes for San Francisco Classical Voice. He has been active on a number of non-profit boards, including serving as president of the Oberlin Heritage Center, and is a member of the board of Early Music America and the Pacifica chapter of the Viola da Gamba Society of America. His book of translations and commentaries on the madrigal poems of Guarini (one of Monteverdi’s favorite librettists) is forthcoming from the University of Michigan Press.

I started playing recorder in college since it was (I thought then!) the easiest instrument to get into chamber music playing. That led me to building a Zuckerman straight-side harpsichord (in my dorm room); it became the centerpiece of an annual Messiah party, leaving it a little stained with candle wax and cranberry/vodka punch!  In grad school, I sang five years in the Harvard University Choir at Memorial Church; our conductor, John Ferris, loved Bach and Schütz. Those late afternoon rehearsals — and then, one year, 8 am chapel every day, singing as part of a vocal octet — were utterly therapeutic escapes from the double pressures of grad school and Vietnam.

What role does early music play in your life?

I’ve been a teacher and scholar of the literature of the Renaissance and Baroque all my working life, and the music of that time has always been central to that work. It’s the focus of my current scholarship: this spring, my poetic translations of the madrigal poems of  Guarini, one of the great madrigal poets of the day, will be published (University of Michigan Press).  Since retiring from Oberlin and moving to the Bay Area almost a year ago, early music has been a big part of life for me and my wife, playing in baroque orchestras (violin and recorder for me, cello for her), singing medieval/Renaissance music in a chorus, playing viola da gamba, generally jumping into the great musical life of this area. I’ve started reviewing for San Francisco Classical Voice, and sometimes I get early music assignments there. I’m also looking into offering some adult-education courses that bring my love of early music and literature together. And as you know, I’m on the board of Early Music America!

What was your most memorable early music experience from the last year?

I was playing in a viol quintet at a summer workshop, in a class coached by David Morris. He’s a stunning teacher, by which I mean that again and again he can touch the heart of his students. We were playing an Italian madrigal — Marenzio, I think — and suddenly the technical difficulties of playing just floated away; for a few minutes, it all seemed integrated: the music around me, the music on the page, the music of the text, the tactus that was at the heart of the music — they all seemed to meld, to be part of some strange aura. It didn’t last long, and I don’t know that anyone else felt or heard it — but it stuck in my memory, and hold it up as a goal for myself in other groups and at other times.

Thanks for that gift of time! Maybe I’ll work on writing the poem that a friend commissioned from me (a wonderful early music singer, in fact). I think it might end up being in rondeau form, but who knows?