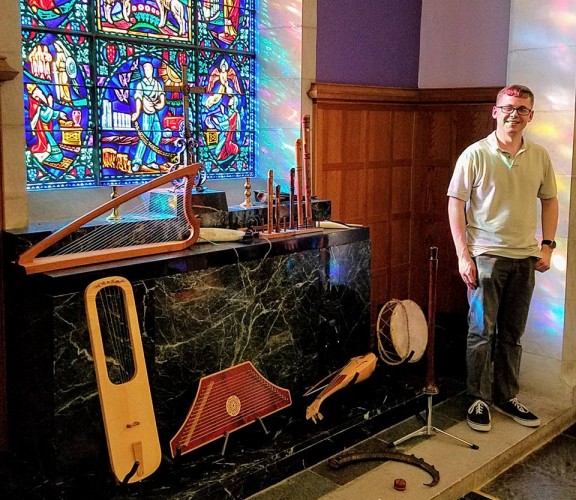 Patrick Dittamo is a Kansan composer, scholar, and musician. He graduated magna cum laude with a Bachelor of Arts degree in music composition from the College of William & Mary, where he studied performance practice and early wind instruments with Dr. Ruth van Baak Griffioen and composition with Dr. Brian Hulse.  As a composer, he makes particular use of historical forms and techniques, as well as early instruments. He commissioned as a U.S. Army Quartermaster Corps officer upon graduation and completes his term of service on active duty at Fort Riley, KS this summer.  He will commence study for a Master of Music degree in composition and musicology at Kansas State University in the fall.

I fell in love with early music slowly, but deeply. I first learned how to harmonize from my mother, an alto, after my voice broke and I couldn’t sing the melodies at Mass without squawking. I always had a preference for older music as I continued to grow as a musician, but my knowledge and experience were shallow, as is the nature of youth, I suppose. 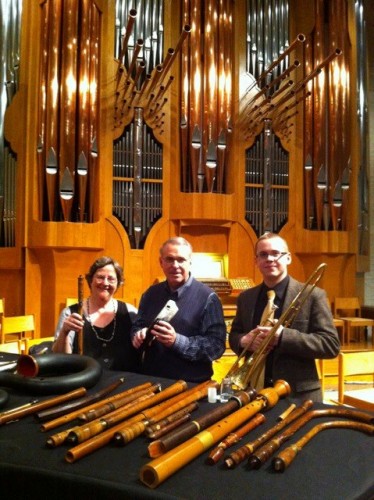 Then, when I started at the College of William and Mary, I wrote to Dr. Ruth van Baak Griffioen on a lark about participating in the College’s Early Music Ensemble. The Ensemble had released an album of Bach & Handel the year before, including the fifth Brandenburg concerto, and in honesty I was intimidated. I thought the Ensemble would surely have no use for comparative amateur such as myself, a mere singer, middling trombonist, and tentatively aspirant composer. But Dr. Griffioen took me on; I consider myself fortunate to count her as a mentor and a friend.

At the College, I was exposed to whole worlds of music, especially the embarrassment of riches found in the Renaissance repertoire. Working with Dr. Griffioen, I developed and matured as a musician and scholar, and learned numerous Renaissance & Baroque wind instruments. I continue to explore the wealth of music history and have no intention of stopping.  It has also proven to be an invaluable source of inspiration in my own composition.

You have an extensive collection of period instruments. How did the collection start, which instrument or instruments were you most excited to own, and what is on your wishlist?

Whatever I learn and love, I want to share with others. So, once I discovered the depth and breadth of early music at the College, I wanted to bring it home to Kansas. I had been a choral scholar and trombonist at St. David’s Episcopal Church in Topeka during high school; and the director of music, Donna Osborne, a talented organist, gave me the opportunity (and the latitude) to compose and play whatever I liked at the services when I came home from college on breaks. Naturally, I started programming early repertoire and writing Renaissance & Baroque-inflected pieces. In due course, I incorporated early instruments. To do this entailed acquiring the instruments I wanted to write for, starting with recorders and soon followed by a tenor sackbut.

Meanwhile, I also sang and played at Masses at my childhood Catholic parish. The new music director at my parish remarked upon hearing about the early music program at William & Mary and the Ensemble’s crumhorns that he “couldn’t imagine why anyone would put one to their lips.” Slightly irritated, I quickly sought out the first capped double reed instrument I could get my hands on, an old secondhand 1960s Moeck tenor cornamuse, with the express purpose of playing it at Mass. (I’m told the look on his face behind the organ console when I started playing it during the introit hymn was priceless). Crumhorns, chalumeaux, schreyerpfeifen (commonly called rauschpfeifen), kortholts, and gemshorns would soon follow, along with further varieties of recorders. As I incorporated more and more early instruments into my compositions, having them on hand increased my ability to see them through to performance, by myself or others.

It’s hard to say which instrument(s) I was most excited for, but easily the most gratifying was and continues to be the Flemish-style harpsichord that we drove down to Georgia to pick up. The resonance, the blossom of the tone, and the manner in which you can caress the string with a plectrum cannot be matched by any electronic equivalent I have encountered. My partner, Bryan, says it is his favorite of all my instruments (though, to be fair, I traumatized him with schreyerpfeifen pretty early on in our relationship, so he may have soured on the wind instruments I so deeply love).

So far as future additions are concerned, at the top of my wish list is a regal, a growly late Renaissance or Baroque one like Harnoncourt used in his recordings of the Monteverdi operas with the Zürich Opera. More attainable prospects include a baroque great-bass recorder, baroque clarinet, scheitholt, tenor schreyerpfeife, or a clavichord.  I’m eagerly awaiting a douçaine on order from Phil & Gayle Neuman, and would dearly love to find a woodwind maker willing to attempt a reconstruction of bassanelli along the lines proposed by Charles Foster in his 1992 article in Early Music.

When you were recently deployed to South Korea, why did you decide to take a recorder along, and how did having it there help you during your time away? 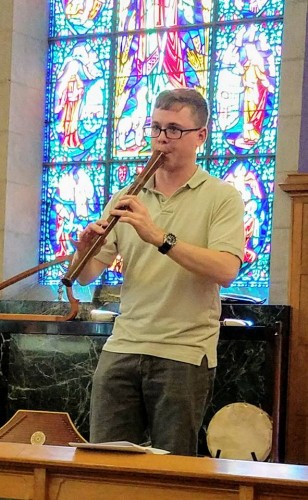 I went on a rotational deployment to South Korea with the 101st Brigade Support Battalion, part of Fort Riley’s 1st Infantry Division. I was going to be away from my better half and my usual pastimes, and decided I’d bring along a resin alto recorder to limber up my fingers during the lonely hours. (I didn’t want to risk bringing one of my wooden recorders). It ended up being a major part of my well-being during the deployment. The country of South Korea itself is a wonderful place, with kind people and terrific food and architecture; that said, the Army experience in South Korea was taxing, especially in my particular work area. But at the end of the day, I could go to my barracks room and read through Handel, Loeillet, or Marcello sonatas off imslp.org, and relax.  I even got compliments from some of my fellow officers who could hear me through my door in the hallway.