CD REVIEW — How can you not love a disc devoted to flashy violin music by lesser-known 17th-century composers, one of whom was afflicted with sleepwalking and killed himself by falling into an excavation ditch and another who was stabbed to death still owing money to the printer of his first (and only!) set of violin sonatas? 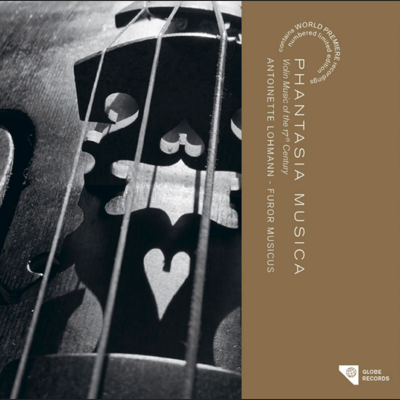 The album’s title, Phantasia Musica: Violin Music of the 17th Century, refers to the stylus phantasticus, a method of composition not bound by text or rules but free to express passions overtly with rapid runs and chordal stops made possible in part by the introduction of copperplate engraving. Included are works by Ulrich Johann Voigt (1669-1732), Johannes Schenck (1660-1720), Giovanni Buonaventura Viviani (1638-1692), Johann Erasmus Kindermann (1616-1655), Johann Baal (1657-1701), Johann Jakob Walther (1650-1717), and Ignazio Albertini (1644-1685), all active in Austria and Germany and all exhibiting mercurial qualities in their compositions.

Among the most striking works in this regard is Viviani’s multipart Sonata 90 from the Codex 726 in the Viennese Minorite Convent. Viviani held the post of Kapellmeister in Innsbruck before Leopold I disbanded the court there. Another highlight is the Hortulus Chelicus No. 1 of Walther (not the lexicographer Johann Gottfried Walther), a suite of movements in varied moods ranging from solemn to the ecstatic. Possibly, the most outré of these works is Sonata VII from Albertini’s XII Sonatinae a Violin Solo, which takes our emotions from bottom to top and back again. Perhaps because of his poor behavior, the composer had trouble holding onto a job. Unlike his sonata, which ends with a little wink, it was Albertini who was stabbed to death at the age of 41.

Also notable is an Allegro from the Opus Primum of Baal, he with the sleepwalking problem. Baal was described as “unequaled as a composer…, whose music was filled with such wondrously beautiful sounds,” and his contribution to this disc is admirably optimistic and full of energy.

The liner notes by the disc’s soloist, Antoinette Lohmann, are printed in English (bless the Dutch!), filling pages that otherwise would have been sacrificed to multiple translations and allowing space for detailed and lively biographies of each composer. These are marked by worldly good humor and an eye for the unusual, and one might say that this characterizes the excellent performances by the Amsterdam-born violinist and her backup band, Furor Musicus. Lohmann teaches at the Utrecht Conservatory and has played with New Trinity Baroque in Atlanta, GA. On this CD, she uses a colorful late 17th-century instrument by Egidius Snoeck still in its original condition.

It is easy, as one goes from one ear-catching piece to the next, to understand why the new styles of the 17th century were all the rage.