The term “genre-defying” is often either advertisers’ gloss or purists’ anathema. Yet it’s a reality that Emi Ferguson lives everyday with utter authenticity — both musically and personally.

Ferguson is principal flute of Boston’s Handel and Haydn Society and a frequent performer with several other period-instrument groups. She also plays regularly with contemporary-music ensembles, including American Modern Opera Company and the New York New Music Ensemble. In addition, Ferguson serves on the faculty at the Juilliard School, from which she graduated as the sole flutist in its inaugural Historical Performance class. 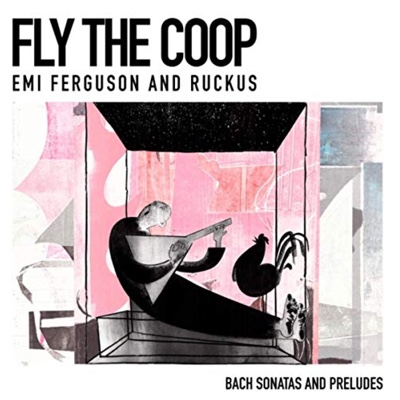 Her latest album, Fly the Coop, incorporates influences from jazz, funk, bluegrass, and a wealth of other styles into Bach’s flute sonatas. The disc, on the Arezzo Music label, features her inventive arrangements and exciting interplay with the period ensemble Ruckus. She sings as well as plays flute on her previous release, Amour Cruel, an album of French air de cour channeled through contemporary pop and world music.

In an interview, Ferguson discussed how playing old music and contemporary works inform one another, the wonder of Bach’s music, and more. Here are excerpts from the conversation.

Were you always exploring multiple genres?

I’ve never felt there needed to be these hard delineations between musical genres, which I think have largely been codified in the past century. I was lucky that, as a young musician, I was encouraged to explore music of many styles with people who understood that I was interested in such an array and encouraged my curiosity. One of my big soapboxes in “classical music” is that hundreds of years of music gets lumped into one general category. People will hear a Tchaikovsky symphony, not like it, and decide that they never want to listen to classical music again — when maybe they’d be really into Renaissance polyphony or Messiaen and had no idea.

The differences between all these sub-genres of classical music are huge, and I’m lucky that I’ve been encouraged to explore the extremes with classical music and beyond. It’s so vast, and that variety is exciting to share. I just want people to keep discovering new sounds. If you don’t love the first thing you hear in classical music, then I’ll give you a list!

Yet doesn’t classical music, and especially early music, rely heavily on historical documents, treatises, etc., to explain how the music was played in its time?

Yes. A huge part of any early-music study is considering the historical sources available to us in order to better understand the techniques and ideas involved. What can be fun (and challenging) is that the treatises are often full of contradictions, sometimes within themselves, and often between each other. I see similar contradictions when working with composers today. Often with new or extended techniques, notation will not be standardized: one composer indicates a technique in one way, another will ask for it some other way, and often the symbols and language they use are different or performer specific. It is fun to see hints of these collaborations in the historical treatises.

I see similar differences, for example, in the ornament tables of historical texts that differ slightly from one source to another. For me, this encourages great dialogue when deciding how to interpret a piece.

Of course, we always have to remember that these documents are from a time well before the inter-connectivity of today’s digital age. As a result, performance techniques could become specific to a certain region or group of people in the same way that language and dialect develop over time. I do enjoy doing things in very historically minded ways, whatever that means. That concept itself changes from person to person and decade to decade as we learn more. Unfortunately, our educational system often distills things down to “there’s one way to do it.” I’ll never know, but I don’t think there is one way to do it, then or now. I wish we had a time machine, but even if we did, we have 300 years of musical and cultural development clouding our brains. I don’t know if we’d truly understand an 18th-century perspective even if we were there.

Based on my experience with new music, there are lots of way to achieve powerful performances, composers change their minds, and everybody is going to want something slightly different. So, perhaps there’s more room for discussion than we often give ourselves. Are there wrong ways? Maybe. But there are so many rights ways. There are so many beautiful records and performances out there, no two alike. We can get as close to historically accurate as possible, and we do the best we can, making the most educated and thoughtful decisions while knowing we live in the 21st century. And that’s also a beautiful thing.

What was your own introduction to playing Bach’s music on period instruments?

I first learned these sonatas on modern flute. The E major sonata [BWV 1035] was my bread and butter. I played it for every audition. While I was starting to learn the baroque flute as a student at Juilliard, a colleague of mine asked me to play that sonata with him for his lesson, and naively I said, “Yeah, no problem!”

It was a completely different experience trying to play on the baroque flute. The key itself presents a lot of technical challenges — and wonderful opportunities for color — but navigating them was a battle at first. It sounded, and felt, like space music.

I thought, “What is this? I’ll never be able to play this sonata,” but when I came back to it for this recording, I fell in love with it in a completely different way, and I can’t get enough of it. Historical instruments show you this parallel universe that’s familiar but has so many different things to see, to taste, to feel, and to touch. I’m lucky to get to do it on both.

So, how does the type of flute affect how you play the music?

The modern flute, which got completely stripped down and built up again in the 19th century, is a machine. I don’t mean that in a negative way. It’s a beautiful machine, but it is very complicated technically, in how everything is pinned together and how things move. It’s built for equal temperament. Every single note is designed to achieve an even sound, color, body, and fullness.

The baroque flute — essentially a tube with holes — is much simpler in construction. But you can do so much with it. It was not developed for equal temperament. Every note has its own color and shading, and you get to constantly adjust that color in the most subtle and beautiful ways. I’m constantly finding new palettes to work with. There are also so many microtonal possibilities on the baroque flute, which often excites modern composers. You can play “in-between” the notes, and there is so much room for pitch bending.

When I’m playing on a modern flute, I’m playing a very different instrument than a period flute. It’s like when a clarinet player plays Bach: the clarinet didn’t exist in Bach’s time, but those musicians want to be able to play his music — and it sounds great. What is amazing about Bach is that his music translates so well, no matter the instrument it is played on.

I think of the modern flute as a different instrument than the baroque flute, but that doesn’t mean I’m not incredibly informed by how I do things on baroque flute. It’s the difference between riding a horse and driving a car. They’re different methods of getting to the same place, and they involve different mechanics, senses, and experiences, but they both work.

Your latest album, Fly the Coop, takes Bach’s flute sonatas and preludes through some exciting musical changes. How much did you actually add to his music?

It’s really hard to add new material to Bach because it’s so good. It’s all there already, so ultimately what we did was color things. Where it might have been black and white, we exploded it into a rainbow of colors with orchestration and rhythm. It might sound very radical, but it’s really just what’s on the page.

The flute lines are all exactly the same. For the most part, the bass lines are exactly what Bach wrote, with the exception of adding one to the third movement of the E major sonata.

Were those musical surprises — a sudden swing beat or shift into a Latin groove — scored in advance?

We never really codified it. Everyone is reading off the same chart, which is the manuscript: the flute line and the continuo line. The prelude arrangements were a little more written out, so everyone knew what lines they were taking — and since there is no continuo in those pieces. The sonatas were more conversational.

Before our first rehearsal, we went through with some general orchestration and ideas about feel for each movement. For example, no harpsichord on this one, no bass here, two theorbos panned this way so we get this sort of sound, or baroque guitars strumming a certain feel. Then, a lot of it was experimentation when we were in the room together and taking advantage of each member of Ruckus’ expertise. They’re all brilliant and respond to any suggestion in the most fantastic and brilliant way.

All of this is a discussion, and the beauty of playing chamber music is that you get to have that discussion with your colleagues. It changes each time we play these pieces.

Apart from their place in the flute repertoire, what stands out about Bach’s music for this instrument?

One of the most fascinating things about these sonatas was that they were written during his time in Leipzig. It’s so unusual that he was writing chamber music for any instrument outside his years in Köthen, but he only heard the flute in the middle of his time there. We have these six sonatas that span his Leipzig career. The earliest one is the E minor sonata [BWV 1034] from about 1724. At the time, he was writing furiously, churning out cantata after cantata, St. Matthew Passion, St. John Passion, some very intense music. He was proving himself in so many ways, and you also hear that in this sonata. Yet the E major sonata is from 1741, much later on in his life, and it inhabits a very different world.

Why was he writing these works? Given all his responsibilities at church and home, why take the time to write pieces for flute? Where were they played? It is wonderful and so unusual in his entire output that we have these secular chamber works. They’re an amazing resource to see how he wrote for a solo instrument as he aged.

This music may be 300 years old, but it’s living and breathing and continuing to evolve and change. It’s a sponge. How cool is that?

Andrew J. Sammut has written about Baroque music and hot jazz for All About Jazz, Boston Classical Review, The Boston Musical Intelligencer, Early Music America’s online and print editions, the IAJRC Journal, and his own blog. He also works as a freelance copyeditor and writer while living in Cambridge, MA, with his wife and dog.