David Yearsley, the author of Bach and the Meanings of Counterpoint (2012) and Bach’s Feet (2015), is one of the most original and stimulating Bach scholars on the present scene. His latest offering, Sex, Death, and Minuets: Anna Magdalena Bach and Her Musical Notebooks, is as provocative and important as its predecessors. 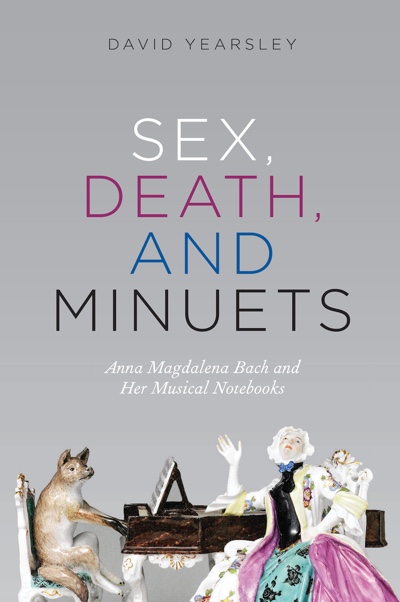 The book is a comprehensive study of the two famous Clavier-Büchlein (one dated 1722, the other 1725) that belonged to J. S. Bach’s second wife (and eventual widow), Anna Magdalena Bach. Their varied contents consist of keyboard suites and miniatures (mostly minuets — some of them abundantly familiar), songs, chorale settings for voice or organ, thoroughbass rules, a singular Fantasia pro Organo, and one curious, naughty poem.

The author observes that the notebooks bear witness to Anna Magdalena’s musical taste and allow us to judge her abilities as a singer, keyboard player, and organist. But they reveal considerably more than that. We soon realize that the book’s title is not only provocative, it is programmatic. Yearsley has ingeniously organized his discussion around the main themes and genres suggested by the two albums’ contents. Successive chapters take up, in order, “Music for Weddings and Beddings,” “Death Every Day: The 1725 Notebook and the Art of Dying,” “Fragment and Fantasy: Anna Magdalena Bach at the Organ,” “Bitter Bean and Loose Ließgen: On Coffee, Cantatas, and Unwed Daughters,” and, finally, “A Widow’s Song.”

The sequence of chapters reflecting the stages of life resembles the design of Robert Schumann’s Frauenliebe und –leben. But beyond shared motifs of love, marriage, children, death, and widowhood (their moods ranging from joy to despair), the song cycle’s distinctly Romantic, and sentimental, portrayal of a woman’s life (as seen through the self-flattering lens of a conventional male imagination) and Yearsley’s distinctly modern, unapologetically feminist portrayal could hardly be more different.

First, however, a necessary introductory chapter, “Magdalena Mania,” offers a scathing critique of the vast literature, both scholarly and fictional, devoted to the protagonist — representations extending from the sloppily sentimental to the sexually frigid. The chapter documents the enormous influence of the putative autobiographical memoir, Little Chronicle of Magdalena Bach, in reality the imaginary product of an English lady, Esther Meynell, first published in 1925. The equally anonymous German translation appeared in 1930 and became a cultural phenomenon of the highest order.

Yearsley makes sure readers understand that the prevailing depiction of the heroine as the self-effacing servant of her godlike husband and numerous children is not just a myth: it is laughable — an insulting caricature. Anna Magdalena Bach was an accomplished Sängerin at the Köthen court; her salary was second only to that of the Kapellmeister — her future husband. She was no humble Hausfrau but part of a professional team — like other high-achieving husband-wife collaborators of the time.

The discussion of love is followed by a theologically informed discussion of death — the subject of several domestic songs and chorales in the notebooks. In this connection, Yearsley notes that Anna Magdalena was surely the soloist in Bach’s 1728 Trauer-Music (BWV 244a) for Prince Leopold of Köthen, the composer re-using music from St. Matthew Passion. Her performance no doubt was informed by the recent deaths of her own children. The Coffee Cantata (BWV 211), conversely, provides a window into “concerns involving sex, love, marriage, consumer culture, and upward mobility,” and an opportunity to discuss contemporary hoop skirt battles and coffee wars. So rich and wide-ranging are the scholarly excursions in this remarkable volume!

The last numbered chapter, “A Widow’s Song,” treats Anna Magdalena’s final years. The first paragraph of the book’s prologue already endorses the prevailing view of “an impoverished final decade of widowhood.” A recent, systematic examination of the economic circumstances of Anna Magdalena’s last years, undertaken by Eberhard Spree (Die verwitwete Frau Capellmeisterin Bach) suggests, however, that the economic situation of the enterprising widow, along with her social status, was not as desperate as hitherto assumed. (Spree and Yearsley will presumably reconcile their difference in future publications.)

Throughout this exceptionally readable book, Yearsley draws on contemporary literature, secular and sacred poetry, satires, encyclopedias, and theological writings to provide the context for such topics as old-young mating, the nature of marital love, women as professional musicians (singers, even organists), widowhood, and the death of children. The volume is a model of scrupulous, wide-ranging scholarship, imaginative speculation, and sensitive musical insight.

Robert L. Marshall, professor emeritus at Brandeis University, is the author, most recently, of Bach and Mozart: Essays on the Enigma of Genius.