A two-day event in October shed new light and new working methods in what some scholars consider a new, interconnected field of study

Last month, for Intersections: Black and Indigenous Sounds in the Early Atlantic World, an interdisciplinary group of 14 scholars representing musicology, ethnomusicology, linguistics, history, and literary studies—all working on facets of early Black and indigenous sounds—gathered at Virginia Commonwealth University, in Richmond, for a two-day event, October 14 and 15.

The conference’s goal, simply put, was to see how our own research could benefit from each other’s disciplines, experience, and personal perspectives, and to share the relevant sound objects with other scholars as well as non-academic audiences. 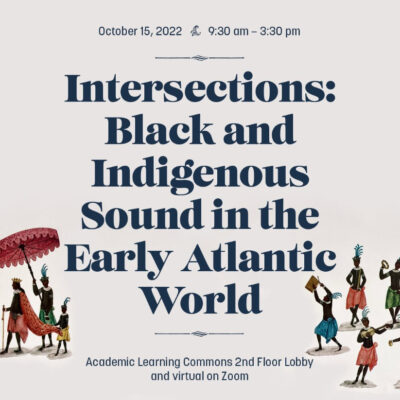 The format was in two parts: on the first day, scholars work-shopped our research-in-progress with each other; on the second, we shared the results and our sound objects with an in-person and virtual audience, almost 200 people.

The work-shopping component, as hoped, led to fascinating and unexpected connections. Divided into four groups, the participants first discussed projects they’d shared in advance, including unpublished book-length and article-length writings. Topics were wide-ranging, from instrument-owning among Native Americas during the colonial era to the political significance of the sounds of the roots of words, with a wide array of Black and indigenous music culture in between. The key component was that different disciplines, in the same room, could benefit from different perspectives and training. The musicologist, for example, could point out a musical element that the literary scholar had not noticed. Another musicologist learned about the possible polysemy (multiple meanings) of a word from the literary scholar, and the phonemes (or sounds) at the root of that word from the linguist.

The opening day concluded with a general discussion about shared questions, themes, and challenges that came up in the groups. A big question was whether our research constituted a new subfield or actual field of study, one that is bringing to the forefront of our respective disciplines the centrality of sound for understanding early Black and indigenous life, culture, literature, and music.

While we could not all agree on whether our work forms a new academic field or subfield, we universally agreed about the centrality of sound-making for understanding early Black and indigenous cultures (from the perspective of Black and indigenous peoples themselves) and for recognizing their contributions to Western music.

One challenge many scholars shared was the paucity of sources. Those of us working in the Iberian Atlantic noted how sometimes we face the opposite problem, too many sources. This underscored the difference between the archives from the Protestant world and the Iberian empires. The discrepancy invites us to consider how cross-spatial comparison can elucidate cases where the sources are too few.

On the second day, the conference participants presented on a sound object from their research projects. The purpose of this component was to share our research with scholars and non-academic audiences (we were joined virtually from people as far as Australia, Madagascar, and Brazil) and engage them in conversation about early Black and indigenous sounds and objects.

I kicked off the presentations with a discussion of a text from 1640, Dance Performed by the Creole Black Women of Mexico City, that I analyzed in Chapter 4 of my book, Sovereign Joy: Afro-Mexican Kings and Queens, 1539-1640. It’s a text that Sarah Finley (Christopher Newport University), will also discuss in her new research about Black sound in colonial Mexico. In our conversation, she called my attention to the Black women’s dancing bodies. Someone in the audience later asked about Black and indigenous women playing musical instruments. Dance Performed by the Creole Black Women of Mexico City and a set of eighteenth-century watercolors from Brazil are among the few sources that show Black women playing musical instruments, although the Mexican texts do not say what instruments the women played. This question from the audience left us a new line of inquiry, requiring our attention going forward.

Next up was Lisa Voigt (Ohio State University), who presented on a Tupi song in an Afro-Brazilian performance in a festival that took place in 1619 in Lisbon. Ireri Chávez-Bárcenas (Bowdoin College) presented on the use of Black speech in the Christmas carols of the choirmaster of the cathedral of Puebla, Mexico, Gaspar Fernández, at the onset of the 17th century. Both of these presentations underscored how music and language can be used as a form of resistance in colonial contexts.

Maria Ryan (Florida State University) shared her research on Black violin teachers in colonial Jamaica. Interestingly, her research relies on runaway slave notices that, to aid recapture, described whether the person who had escaped slavery was a music instructor. Sarah Eyerly (Florida State University) was unable attend the conference, but we shared her great project on recovering Mohican hymns from the archive of the Moravian Church. (Editor’s note: Sarah Everly made a presentation on this topic at EMA’s 2022 Virtual Summit.)

Mary Caton Lingold (Virginia Commonwealth University) shared an eighteenth-century diagram of Black instruments from Suriname. Bonnie Gordon (University of Virginia) talked about her “practice of collecting sonic snippets that connect music history research to local history and the present.” For example, when she teaches Monteverdi’s L’Orfeo, she thinks about George Sandys, the translator and traveler who served as Treasurer to the Virginia Company and had said that Orpheus “had reduced wild people to civility,” or of John Quincy Adams, who “proposed the lyre of Orpheus as a federal seal because it could lead men and beasts to harmony.” Thus, music is understood in its relation to what the settlers sought to impose upon local, native populations.

Sarah Finley dropped in to share a 1622 image of Mexico City’s central square, today’s Zócalo, devoid of people, calling attention to its abnormality, as this square was ordinarily filled with sounds. As she noted, later images of this same space show Afro-Mexicans with musical instruments. She invited us all to listen to images for what they can reveal about early Black and indigenous sound. Emily Green (George Mason University) presented on her crucial project creating resources for music teachers to teach early Black and indigenous sound.

Carlos Cuestas (City University of New York) taught us how to read and make the rhythm of the son jarocho, developed by Black people in Mexico, as he played Café con Pan (Coffee with Bread) on the jirana, son jarocho’s small guitar.

The final day concluded with a concert by Lua Project, a Charlottesville-based music group that combines Latin American and Appalachian sounds. They played their own “Mexi-lachian” versions of such classics as La bruja (The Witch), a standard son jarocho, and La Llorona.

I believe most of us came away from the stimulating Intersections: Black and Indigenous Sounds in the Early Atlantic World conference with a heightened awareness, as the organizers described it, that “interdisciplinary thinking is an essential next step in this burgeoning field” and, not least, a heightened awareness on the need to include early black and indigenous sounds in the music classroom and music education in the U.S.

Dr. Miguel A. Valerio, an assistant professor of Spanish at Washington University in St. Louis, is the author of Sovereign Joy: Afro-Mexican Kings and Queens, 1539-1640 (Cambridge University Press, 2022).