Doubling Your Pleasure With Telemann

CD REVIEW — Georg Philipp Telemann was a tireless music machine, and given that he lived to the unbelievable age (for that period) of 86, he was granted plenty of time to be prolific. He wrote over 3,000 compositions — and those are only the ones we know about, half of which didn’t survive. 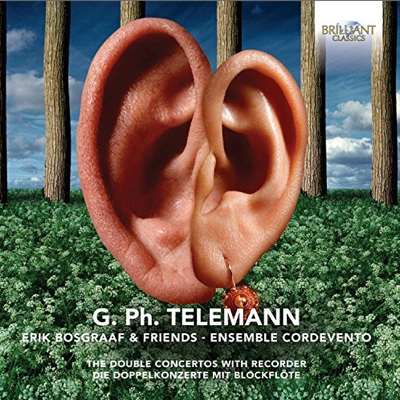 Among the nearly countless combinations of instruments for concertos that Telemann came up with are the five included on this release that respectively pair an alto recorder with transverse flute, bassoon, viola da gamba, and two other alto recorders. They all adhere to the same slow-fast-slow-fast, four-movement layout, yet are varied enough in texture, length, and rhythm — and, most crucially, inventive enough — to make continuous listening a pleasure in the lively hands of Dutch recorder virtuoso Erik Bosgraaf and friends.

The Concerto in E Minor for alto recorder, traverso, strings, and basso continuo, TWV 52:e1, is by far the most-recorded concerto of the five; arkivmusic.com has 31 listings of it at last glance. The most striking movement is the finale, which becomes a kick-up-the-heels Polish dance based upon a folk-like drone.

Aware of the bassoon’s unique personality, Telemann gave the instrument some witty dialogue with the recorder in the second and fourth movements of the Concerto in F for alto recorder, bassoon, strings, and basso continuo, TWV 52:F1. Bosgraaf and bassoonist Marije van der Ende thrive at these fast tempos; their marvelously pointed articulation keeps the spirits bubbling (van der Ende’s mischievous smile in her photo within the booklet tells you a lot about her playing).

In the Concerto in A minor for alto recorder, viola da gamba, strings, and basso continuo, TWV 52:a1, the viola da gamba isn’t quite as agile an instrument as the recorder in this music, but violist Robert Smith manages to keep up, and the finale has a nice rustic feel to it. The second movement of the Concerto in B-Flat for two alto recorders, strings, and basso continuo, TWV 52:B1, is quite imaginative, with its cascading dual runs for soloists Bosgraaf and Yi-Chang Liang, and the fourth movement just zips along. The other double recorder concerto, in A minor, TWV 52:a2, finds them playing mostly in unison thirds or sixths; it’s not quite as flamboyant as the B-flat Concerto, but never less than engaging.

Bosgraaf’s Ensemble Cordevento is a strictly period-instrument band, but there are no hints of scratchy, swelling pedantry in these performances, and they are beautifully recorded in a just-resonant-enough 12th-century church, the Kruiskerk in Burgum, the Netherlands. I’m not crazy, however, about the ugly computer-generated cover art.