Keyboard Songs In Need Of No Words

BOOK REVIEW — The first words of the book’s title bring to mind Mendelssohn’s piano pieces of the same name, but this volume is an extensively researched inquiry into an important facet of English keyboard literature from William Byrd and the Elizabethan virginalists to the death of Handel. The literature surveyed includes keyboard arrangements of ballads and popular songs, dance tunes, lute songs, vocal polyphony, and music from the theater. 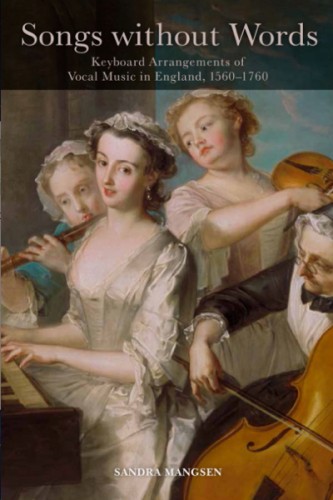 Sandra Mangsen prepares the reader in the introduction with an excellent and detailed discussion of the concepts of “transcription” and “arrangement.” The opening chapter (“Ballads Transformed”) is the only one to treat keyboard literature before the Restoration (1660); it deals with settings of five ballads and the Lachrimae Pavan. The author continues with a description of how publishers such as Henry Playford (The Harpsichord Master, Musik’s Hand-maid) and John Walsh (The Ladys Banquet, The Ladys Entertainment) began long-running series of publications that sought to capitalize on the growing popularity of theater entertainment. Aimed primarily at the amateur female market, they represented a range of composers, some with original keyboard pieces, some with arrangements, including those by John Blow, Jeremiah Clarke, John Barrett, William Croft, Henry Purcell, and, later, Handel. These anthologies offer a valuable glimpse into tastes of the time and the state of amateur keyboard playing.

In the 1709 and 1711 volumes of The Ladys Entertainment, Walsh found in the organist, harpsichordist, violinist, and composer William Babell (ca. 1690-1723) an arranger who could transform arias from the latest London operas and pasticcios into something close to idiomatic keyboard music. Babell’s arrangements often incorporate the violin parts or re-write the string figures and reveal a sensitivity to sonorities by frequently notating the bass line in such a way as to indicate the sustaining of harpsichord tones. He did so by using quarter-note stems for the first note in each of a series of paired eighths or provided two note-heads — a half note alongside a quarter — where the continuo line has only single eighths or quarters.

Babell’s work in this genre reached its apogee in the 1717 Suits [sic] of Celebrated Lessons, in which he grouped the arias into sets (suites), each preceded by a prelude. As a confirmation of Babell’s virtuosity, his contemporary John Hawkins remarked in his A General History of the Science and Practice of Music of 1776 that few could play Babell’s compositions but the composer himself. I was pleased that Mangsen provided one of Babell’s harpsichord arrangements as an example, a complete aria that, for comparison, is aligned measure for measure with the songbook version for voice, violin, and bass.

From 1725-60, Walsh published seven volumes of Sonatas or Chamber Aires . . . Being the most Celebrated Songs and Ariets . . . Compos’d by Mr.Handel, which would ultimately contain nearly all of the solo vocal music from Handel’s operas and oratorios in generic instrumental arrangements. These simply omit the vocal texts and melody instruments, enabling keyboard players to enjoy the compositions in whatever way suits the situation or their own preferences.

Histories of keyboard music frequently bypass this large repertoire of “derived” (arranged) music, so one notes with satisfaction the very thorough coverage here, with a generous amount of illustrative material, tables of publications, music examples, and facsimiles. Some of the author’s concerns throughout are questions such as these: Who arranged the piece? For whom and for what market was the piece intended? In what amateur and professional contexts were the versions read? Did the market for arrangements vary by gender? Do manuscripts and printed versions serve different purposes? With these ideas in mind, the book could almost be thought of as a document on not only musicology and performance practice, but cultural history as well.

Julane Rodgers taught at the University of Dayton (OH) and played harpsichord with the Dayton Philharmonic and the Dayton Bach Society. She performs with the Sarasota-Manatee Bach Festival.