BOOK REVIEW — The introduction to Beyond Bach declares that the book “explores the musical culture of Bach’s Germany from the perspectives of those who lived in it,” arguing further that “if we are to truly know the world Bach inhabited, we need to devote far more attention to the musical lives of ordinary people.” The author adds that “the keyboard — and its solo repertoire” are the focus of the discussion “because Bach himself was so closely associated with the keyboard, both as a performer and composer.” No reviewer could more succinctly describe this remarkable book’s subject matter, method, and rationale. 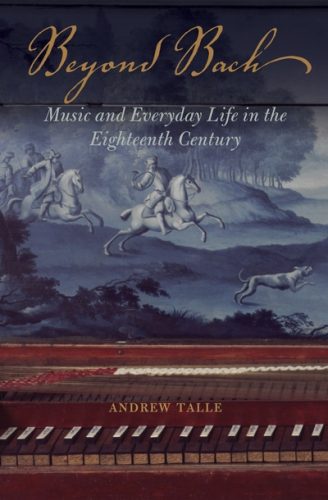 We encounter instrument makers, music teachers, organists, pastors, university students, young ladies of the upper middle class, and aristocracy. Most of them, indeed, are “ordinary” people from the standpoint of cultural history, but not all. Appearing among the dramatic personae are James Boswell, author of the celebrated biography of Samuel Johnson, and the formidable literary power couple of Bach’s Leipzig: the rationalist literary critic Johann Christoph Gottsched and his gifted wife, Luise.

How many serious musicological studies have chapter titles like “The Mechanic and Tax Collector,” “A Silver Merchant’s Daughter,” “A Dark-Haired Dame and Her Scottish Admirer,” “A Blacksmith’s Son,” “A Marriage Rooted in Reason”?

To a considerable degree the book’s delights are in the details. Herewith a sampling of the fascinating — and enlightening — facts contained within:

Item: The byword for all things associated with luxury and the good life in J. S. Bach’s Germany was galant. The most galant musical instruments were those struck with keys. Among other things, they were handsome pieces of furniture.

Item: Even the most successful organ builders earned the bulk of their income from constructing harpsichords and clavichords. Most customers for clavichords were well-educated, well-off men. Most organists received the bulk of their income from teaching. Keyboard students took between two and four hourly private lessons a week. The going rate was two or three groschen (ca. $8-12) per hour.

Re women: Keyboards and lutes, associated with domesticity, were the instruments favored for women. Moreover, they kept girls at home and away from such unwholesome pastimes as card playing or kissing men. Music’s “power to engage the body gave a woman’s practice room a distinctive frisson. Keyboards were frequently kept in bedrooms…heightening the allure of inviting a suitor to hear a few innocent galanterien. The only man regularly granted access…was her music teacher.”

Re men: Little value was placed on music in boys’ education. Unlike the case with females, male amateurs played music as a vehicle for socializing. On the other hand, only men, by and large, could become professional musicians.

Re morals: “During Bach’s time in Leipzig, the parents of around 12 percent of the infants baptized in the two main churches were unmarried.” The prostitutes of Leipzig were “classier” than those of Jena. One of the attractions of the Leipzig brothels was their “skillful and lively music.”

Re J. S. Bach: His published keyboard works were widely distributed. The “giga” from the B-flat Partita was his most famous piece. Admired by some but certainly not everyone. Luise Gottsched found Bach’s music “unfathomably difficult” — at least for listeners. She much preferred Hasse and Handel. One owner, playing on the phrase “zur Gemüths-Ergezung” (for the refreshment of the spirit) found on the title page of Klavierübung III, wrote on his copy “Zur Augen-Ergezung und Ohren-Verletzung” (for the enjoyment of the eyes and injury of the ears.)

Although Bach himself — and his music — only occasionally appear directly in the book, their presence throughout is palpable. Thanks to Talle’s engaging and vivid account, we, too, virtually share many of the mundane experiences that the Thomaskantor, for his part, shared with his contemporaries.

But make no mistake: this original book constitutes an altogether serious contribution, lending a new dimension and depth to our understanding and appreciation of the iconic master.

Robert L. Marshall, professor emeritus at Brandeis University, is the author of The Music of Johann Sebastian Bach: The Sources, the Style, the Significance, and with Traute M. Marshall, Exploring the World of J.S. Bach: A Traveler’s Guide.