CD REVIEW — LeStrange Viols is a relatively new ensemble, having come together in 2014 to record their debut album, a modern premiere of eclectic, experimental consort music by the 17th-century composer William Cranford. While that album focused on the music of a single composer, here they explore the consort works notated within a single manuscript: London, British Library, Add. MS 31390. Entitled “A Booke of In Nomines and Other Solfainge Songs of V, VI, VII, & VIII Pts for Voyces or Instrumentes,” it contains more than 135 compositions copied in the mid- to late 16th century. The pieces range from (largely untexted) Magnificats, motets, and anthems to French, Italian, and English secular music and more than 60 instrumental works. It is clear that the manuscript was meant to be performed from, because it is notated in table-book format: each part is copied facing a different direction, such that the singers or players could sit around a table and see just their own part. 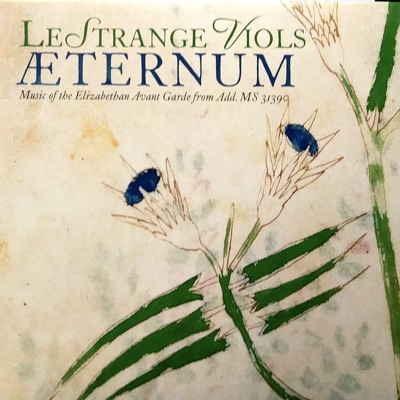 LeStrange chose 26 of the manuscript’s works to record here. As they state, some of these were the “hottest” new pieces of their day, like those by newcomer William Byrd, while other works were the “golden oldies”: particular favorites from earlier in the 16th century, such as those by John Taverner or John Sheppard. Regardless of date, however, the pieces reflect a conglomeration of styles, textures, and techniques. Some are simple, singable, and popular in style, like the French chansons by Janequin and Clemens non Papa. Others are reminiscent of the Cranford album in their rhythmic and harmonic complexities; listen, for example, to the setting of Spes nostra by Osbert Parsley, which has a five-beat cantus firmus, or the In nomine by Picforth, in which each instrument plays only one type of rhythmic value throughout.

Peppered throughout are the delightful English cross-relations, and LeStrange doesn’t shy away from accentuating them, adding a delicious crunch to many of these works. In fact, they don’t shy away from much; they play with attention to dynamics and a lovely sense of phrase, each voice swelling and fading according to its own structure but always with a careful ear toward group cohesion and overall rhetorical gesture. They’re not afraid to have fun, though; the Picforth is delightful here with the cantus firmus bowed and all other voices plucking, and Christopher Tye’s setting of the In nomine ‘Crye’ is taken at a peppy tempo, allowing the various “cryes” to bounce frenetically from player to player.

As befits the manuscript’s title, a good third of the album is settings of the In nomine, but they are wonderfully interspersed among a variety of other types of pieces. Particular standouts are the album’s opening In Aeternum by William Mundy, Byrd’s O salutaris hostia, and the setting of Browning my dere by Clement Woodcock (perhaps the manuscript’s scribe); so too are the Clemens non Papa chanson and the Taverner In nomine, which have si placet voices unique to this manuscript. This is an album that would be highly recommended simply for paying unique and careful attention to works in their original context. Fortunately, LeStrange lives up to the promise of their first album, treating us to a fascinating musical experience as well.