BOOK REVIEW — What’s in a name? Before our current era of branding, new inventions were called many different things by their inventors and spectators. In The Eighteenth-Century Fortepiano Grand and Its Patrons from Scarlatti to Beethoven, Eva Badura-Skoda most persuasively shows that the early piano in all of its guises was subject to a blinding array of names, leading to all sorts of confusion. The instrument itself during this time went through an awkward adolescent period of flamboyant experimentation, when contraptions of every type were being put forward by crackpot inventors as the “next big thing” and serious builders who were intent on improving the instrument’s refinement and expressive potential. It took a while for things to settle down and for composers and performers to agree on what made the most sense for an evolving musical style, leaving the rest of us to speculate and wonder just what was going on. 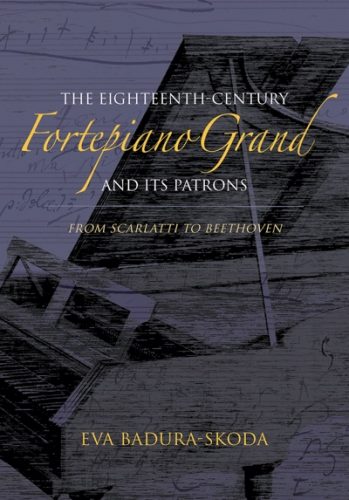 In the meantime, works were being written and played on a wide variety of instruments, with varying degrees of success and acceptance. Contemporary writings on the instruments and designations on title pages of compositions (e.g., Beethoven’s specifying his early sonatas for clavicembalo OR pianoforte) are confounding to the literal-minded and amusing to the rest. The old question of what was most desired by the composer, and therefore what we should do today to best satisfy that desire as regards choice of instrument, is the fuel for the argumentative stance of this book. The answer to this question is not so easily found here, perhaps because the author uses so, so many names — in so many languages — for the new invention that it is impossible to list them here. Only one — “Fortepiano Grand” —seems not to have existed, yet it is this name that is used to describe the instrument in the book’s title.

The larger issue is that the book is, above all, a polemical treatise. Just as the writings of Wanda Landowska and other 20th-century harpsichordists sought to obtain legitimacy for the harpsichord in an era of resistance to its revival, Badura-Skoda seeks to prove the musical superiority and quick acceptance of the new invention by J. S. Bach, D. Scarlatti, the Bach sons, and many other early composers and performers. The author’s basic argument is that there was a great desire in the 18th century (all of it) for a keyboard instrument that had dynamic flexibility and was louder than the clavichord. The harpsichord was hopeless in that regard, and on top of that, musicians wanted the maximum potential for changing sound colors as well as volume. Yet, the fact that the terms “probably,” “obviously,” “perhaps,” “likely,” “might,” “apparently,” “this allows us to assume,” and so on can be found on every page seriously diminishes Badura-Skoda’s arguments. I will cite just one of many examples. On page 177, we read the following:

I will let readers draw their own conclusions from this sample paragraph as to the strength of the author’s conclusions. My personal response is that if there were as many combined harpsichord-piano instruments in the 18th century as she suggests, our museums would be full of them. The entire book is based on this type of reasoning. There is, moreover a fair amount of scholarly score-settling in it, with Badura-Skoda taking numerous fellow writers to task, by name, for advancing theories that do not square with hers.

Nevertheless, there is still much of value in this impressive body of research, such as her illuminating description early on of the guild system for builders, the stifling regulation to which they were subjected, and the steps through which an apprentice may become a master. All in all, through its dense, almost 500 pages, this book tells the story of Badura-Skoda’s passionate love of a particular sound — and what’s wrong with that?

Peter Sykes plays the keyboards and teaches at Boston University and Juilliard.