CD REVIEW — Composed between 1798 and 1800, the six string quartets that comprise Beethoven’s Opus 18 demonstrate his complete mastery of the classical quartet style as put forth by Haydn and Mozart. On their new recording of Nos. 1 through 3, the magnificent Eybler Quartet, formed in 2004, has put interpretive traditions aside and reconsidered them through the mind of the composer. The results are beguiling. Throughout, the ensemble plays with a warm sound, discrete use of vibrato, clear articulations, and impeccable intonation. And above all, tempos make sense. 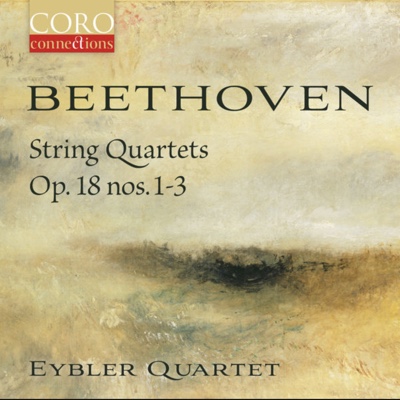 Most of the repertoire violinists Aisslinn Nosky and Julia Wedman, violist Patrick Jordan, and cellist Margaret Gay regularly perform is by composers from two to three generations before Beethoven. To them, Opus 18 is new music. In addition to performing the quartets of Haydn and Mozart, the group delves into the repertoire of such lesser-known composers as Leopold Koželuch, Carl Ditters von Dittersdorf, Florian Leopold Gassman, Johann Baptist Vanhal, Ignace Joseph, and their namesake, Joseph Leopold Edler von Eybler. The ensemble plays on instruments that are “appropriate to the period” of the music they perform.

In his introduction, violist Jordan writes that “tradition is a multifaceted word: it means ‘to hand down,’ yet its roots are in the Latin verb ‘to betray.’ What we have uncovered for ourselves has altered forever our sense of Beethoven’s creative struggle.” Jordan goes on to explain that in order to deconstruct the works, early in their rehearsal process they played from different editions — “one of us from the competing urtext edition, two from the first Viennese editions parts from Mollo (which Beethoven loathed), the fourth from the Bärenreiter parts. By presenting ourselves with contradictory information, we forced ourselves to delve deeply into the exhaustive Critical Notes that detail how [Bärenreiter editor Jonathan Del Mar] reached his conclusions.” The Eybler also decided to respect Beethoven’s metronome markings.

An attention-grabbing performance of the Quartet No. 1 in F major — this is actually the composer’s second quartet — begins the recording. The unison opening of the Allegro con brio is wonderfully limpid. During the operatic Adagio affettuoso ed appassionato, lyrical passages are seamlessly passed from one player to another. The Scherzo-Allegro molto is completely charming and full of jokes — cross-purposed accents and phrases that find one player out of step with the rest of the group. The concluding Allegro is crystalline.

The Eybler sound brilliant during the Haydnesque Quartet No. 2 in G major, the third to be composed. The jagged lines of the Scherzo-Allegro are perfectly in sync and never lose tempo. The Allegro molto, quasi Presto is full of joy.

First in order of composition is the Quartet No. 3 in D major, and the ensemble’s performance of it is splendid. The opening Allegro contains enough fast, virtuosic passages for each member to showcase individual technical prowess. The sudden shifts in tonality are accented with color changes. The Andante con moto emphasizes the moto and sings like an aria, while the Allegro is mischievously playful. The ending Presto — a perpetual motion — is full of comic opera gestures. A whimsical, soft motive brings the CD to a spirited conclusion.

With nearly 70 minutes of masterfully played Beethoven, this recording leaves you waiting for the Eybler to complete the Opus 18 cycle.