CD REVIEW ­— The old saying “all good things must come to an end” applies to everything, in its own time. Unfortunately, that time is now for the Flanders Recorder Quartet. After 30 years of performances, recordings, and early-music ambassadorship, the group has decided that this will be their last album together. The ensemble is one of the best-known recorder consorts in the world; at their last tally, they have given over 2,500 concerts in more than 50 countries. On their two dozen recordings, they have presented the best of Renaissance and Baroque consort repertoire and also championed contemporary composition for recorders. 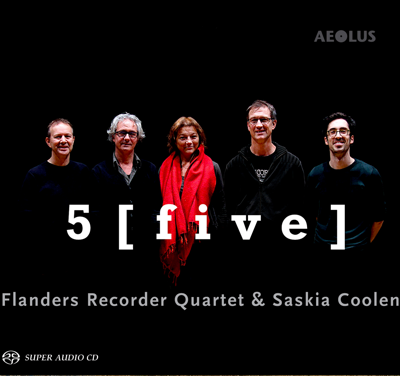 For their last recording, then, one might expect a sort of “greatest hits” approach, showcasing the best the quartet has to offer. One could view this album in just that light. A mix of familiar and new repertoire, the selections from Schein and Bach are reminiscent of their earlier recordings dedicated to those composers, the two jazz numbers remind of their album Encore!, and contemporary selections from Pieter Campo and Sören Sieg are interspersed throughout, like those on their Henry VIII album. And yet, in one crucial way, it isn’t a retrospective at all, nor is it the best of the FRQ; on this recording, the ensemble has invited renowned recorder virtuoso Saskia Coolen to join them, making this feel less like the Last Album of the FRQ but instead a little like a coda, a Flanders & Friends farewell.

The musicians state that they had specifically wanted to explore the fuller harmonies, richer sonorities, and greater play of contrast and variation that repertoire for five voices offers. Besides, they say, “it is a great challenge to sound like a perfectly-oiled team.” On this recording, challenge accepted. 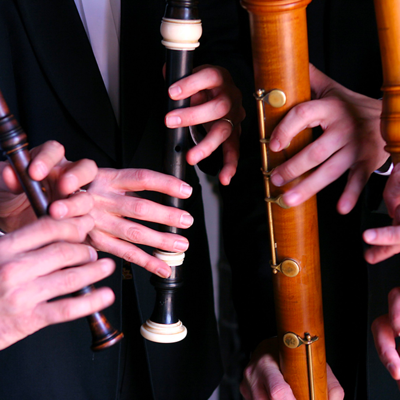 There isn’t simply an extra voice with five players, but new possibilities for dynamic or stylistic variation (the Sieg suite Inxaxheba, for example), expanded instrument ranges and colors (oh, the stunningly gorgeous timbre of the lowest recorders on the Schein suite or the Ward Fantasia), and new contrast between pairs or groups of voices (the beautiful uppermost melody against the lower voices in the Lully Chaconne, or the various groupings in the final Schein Canzon). Their communal revisiting of old composer favorites, and once again inviting new composers into the fold, only adds to that Flanders & Friends feeling.

As a result, the album feels less a parting gift to their audience than a parting gift to themselves, filled with the warmth of recognition, the slight melancholy of nostalgia, and excitement for new adventures. A Bach fugue is never old hat when you have a five-voice stretto, and how often can a consort say they have performed a Boismortier concerto for five voice flutes? The FRQ and Coolen play so beautifully in sync with each other, with such a feeling of intuition, that it almost makes me wish that this were the beginning of the Flanders Recorder Quintet. Instead, I wish each of them well on their new, individual journeys, and I thank them for three decades of excellence, including this final album.