BOOK REVIEW — To do something “without fanfare” (or, equivalently, in French, “sans tambours ni trompettes”) is to do it in such a way as to avoid notice. Conversely, “fanfare” has long been used to herald important public events, to foster civic pride, to incite martial valor, and to honor rank. Civic cultures that evolved “fanfare” for public purposes typically developed a stake in controlling “noise” as well, and thus in trying to regulate private uses of music. 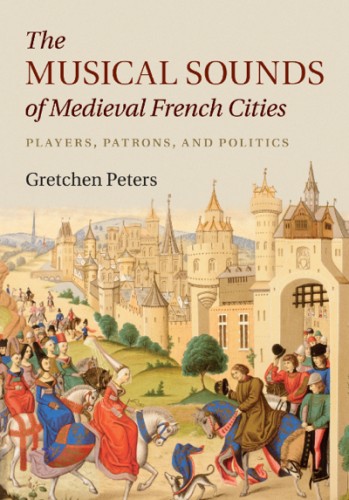 What The Musical Sounds of Medieval French Cities: Players, Patrons, and Politics shows is the exquisite diversity of how public “fanfare” was sponsored by individual cities and coordinated by civic ordinances with more private musical practices. Throughout the book, Gretchen Peters ventures a few probing general conclusions, but she also allows her archivist’s flair and love of local color — of local timbre — to be heard loud and clear, enriching every page with surprising and charming details.

The book is beautifully researched, and the joys and challenges of examining what early-modern historians called “ruins,” meaning fragmentary records half-destroyed by time, are conveyed to the reader with exceptional intelligence and transparency. As a result, the reader’s trust is gained, and the account is never wearisome. Peters, professor of music history at the University of Wisconsin-Eau Claire, initiates us into the musical sounds of medieval French cities on multiple levels, aided by an excellent appendix describing the various instruments that were used in various localities.

A delightful picture emerges of human beings organizing soundscapes for themselves shaped by local taste, local talent, serendipity, and varying degrees of civic self-awareness and pride. My favorite among Peters’ many discoveries is the petition by Dijon civic leaders for a trumpet in 1433 that included a drawing in the margin to make their request clear (reproduced in her book).

Chapters One through Four present key cities and regions of France, from feisty Languedoc and mirthful Provence to the royal Loire Valley and Champagne regions and to prosperous Flanders. With great skill, Peters individualizes each city as shaped by a unique economic, political, and human history. She also shows that cities with more political autonomy (such as Montpellier and Nîmes in Languedoc, Saint-Omer and Douai in Flanders) sponsored more elaborate and stable groups of musicians than cities with stronger ties to their feudal overlords or to the French crown (such as Narbonne in Languedoc or Orléans in the Loire Valley).

Particularly interesting is the “mixed” case of papal Avignon, where civic sponsorship of music fluctuated over the 14th and 15th centuries with the loss and then relative recovery of civic autonomy, but where the papal court encouraged something like an internationalist, European music. Also of special interest is the evidence that civic-sponsored music in Flemish cities deliberately aimed at entertaining and pleasing citizens beyond notifying them of important events.

Chapters Four through Six delve into ways music was sponsored by private — or at least by non-civic — institutions, such as confraternities, churches and universities, inns and bathhouses. Peters provides fascinating information about everything from minstrel schools to instrument-making guilds; attempts to regulate charivari (a mock serenade); and real-estate investments by musicians. Only one of Peters’ translations puzzled me: “pour l’onneur et amour de leurs maistresses” is translated as “for the honor and love of their masters,” rather than “of their mistresses.” Might Peters have missed a possible case of feminine sponsorship of music?

Peters concludes by persuasively arguing that we must revisit the view that medieval musicians were typically itinerant outcasts. Many musicians, she shows, were respected members of the city. This conclusion has important implications reaching beyond medieval musical culture. Indeed, a striking feature of 17th-century depictions of artisanal families by the Le Nain brothers is the ubiquity of figures young and old playing a pipe, suggesting that music was associated with dignity and family values rather than with marginality.

The Musical Sounds of Medieval French Cities is a fine achievement and a great read. It retrieves a lost world from oblivion. It should appeal to a broad audience and kindle new perspectives on the history of music.

Anne Davenport did her doctoral work in the History of Science and has published on medieval theology and on Descartes. Her recent work is focused on Catholic missions in early modern England. She teaches an Honors seminar at Boston College on Theories of the Self.