Winning Early Music Fans, One RenFest at a Time 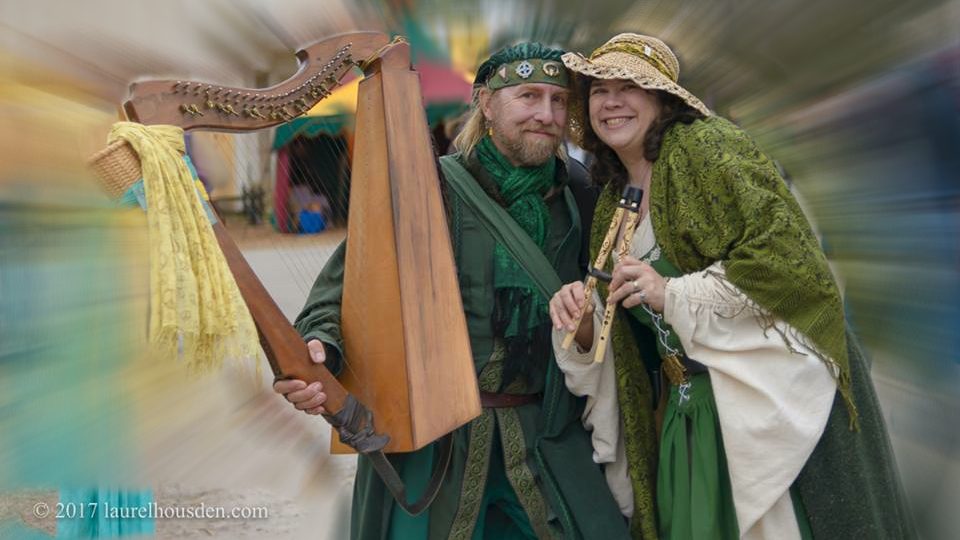 Third in our series of guest articles for Early Music Month
What do you expect when going to a Renaissance Festival? Turkey legs? Wenches in bodices with tankards of beer? Knights jousting for Royals? Minstrels with modern guitars singing 18th Century Irish drinking songs? This is what most patrons are led to believe the Renaissance Festival experience is all about. The challenge we face every festival day is to bring the Early Music and culture experience to those who aren’t necessarily there looking for it.
We are Jay & Abby Michaels, known as The Harper and The Minstrel, singing and performing Medieval & Renaissance Music on over a dozen traditional instruments. We have been told that, as Renaissance performers, we are “performing champagne music for a beer crowd.” Although we find Renaissance Festivals performances can be challenging, they are equally as important to us as performances in concert halls, churches, and other venues where the crowd is already familiar with, loves, and is eager to hear Early Music.  At Renaissance festivals, it can be difficult to bring in patrons who may never have heard Early Music and who are as timid as a 3-year-old with a plate of Brussels sprouts!  We have observed patrons at the rear of the stage area stand for entire performances because they were afraid to commit by sitting in a chair.
Because there is so much to experience at a Renaissance Festival, when we are not on stage we take our music to the streets in the role of Strolling Minstrels. With the double flute, also known as the aulos, and the wire-strung harp (clairseach), we try to provide all whom we encounter with a little taste of Early Music in the hope that they will find our stage and want to hear more.
Winning over patrons to listen and enjoy Early Music can be both highly satisfying and rewarding. The beauty contained in Ancient Music is best preserved for future generations through the sharing of it, with historically informed, passionate performance. We believe these performances should reach as many people as possible, even if it is not necessarily why patrons attend a Renaissance Festival.  The highlight of each festival day is to attract an audience that is looking for exactly what our Early Music performance provides: beauty, culture and a window into the past.

We are celebrating Early Music Month with performances on the Phyfe and Fiddle Stage at the 26th Annual Florida Renaissance Festival, where we are releasing our latest CD offering, “Renaissance Dance & Romance.”

Jay and Abby Michaels are members of Early Music America. Jay is also a member of The Historical Harp Society and The Viola da Gamba Society.