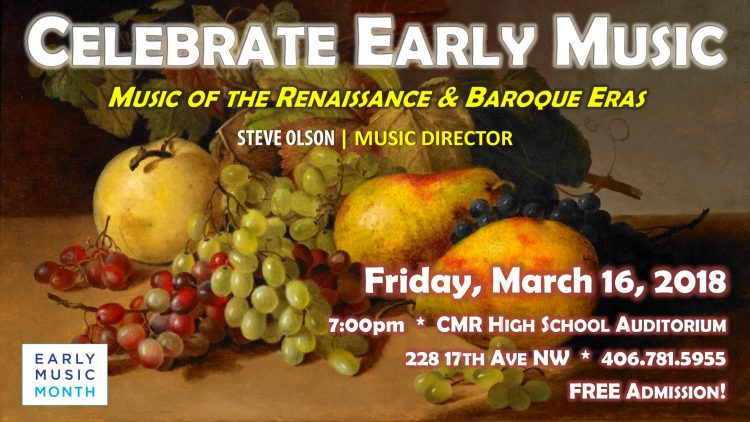 As a high school orchestra director, I’ve always wanted my students to explore the vast expanse of music that is the Renaissance and Baroque.  After six years of teaching, we’re finally producing an entire concert of early music, which is both rewarding and challenging!

The biggest challenge, by far, of early music is rhythmic independence. String students often struggle with the coordination aspect of rhythm (which string goes to which note, up or down bow, etc.), making independent polyphonic parts extremely difficult to perform organically. We’ve worked hard over the years developing solid rhythmic skills, and now that this music is finally accessible, it is also the perfect repertoire for reinforcing and expanding those skills. Students need to count and read rhythmically on their own, rather than follow a section, or even a conductor! We also experiment with conductor-less playing, which is great for developing strong communication, score study, and ensemble skills. Although we aren’t quite ready to go completely conductor-less for our March concert, we will compromise and I will lead from the harpsichord.

In a perfect world, the students would play period instruments.  As that is not an option, we compensate by moving our modern bow grip higher up on the stick, adding some of the lightness provided by a baroque bow. The students also have the opportunity to try out my baroque bow and experience the extreme differences between modern and baroque bows. The cellos are also testing out playing without an endpin!

We have also experimented with tuning down to A-415! It’s great to see their expressions when they hear such a “foreign” sound, and it’s only a half-step down! However, we don’t usually stay at 415 beyond the experimentation stage.  Students need to tune up for everything else they do, and until the ear adjusts to the new tonal center, tuning across the fingerboard can be quite frustrating. Luckily our high school has a real harpsichord, but it is a non-transposing A-440 instrument.

When considering repertoire, I try to program a nice mix of household names and obscure, “lost-to-history” composers.  Most students will know the phenomenal works of Bach, Handel, Vivaldi, etc., but there are so many “undiscovered” gems out there, many not yet in print! Thanks to IMSLP and other scholarly digital library collections, we now have access to these little-known works. Our upcoming early music concert features works by Handel and Vivaldi, as well as Schmelzer, Praetorius, Charpentier, and more!

Overall, I believe providing students an early music experience allows them to enter a world completely unlike their familiar norm. From the contrapuntal textures that entwine and enthrall the listener, to the intoxicating chord progressions and dissonances, to the parts that are actually challenging and exciting for string bass players, to the little-to-no use of vibrato, it’s something new, different, exciting, challenging, and a sheer joy to share, teach, and perform!