Let’s Talk About Antisemitism in Our Field

OPINION — It was a moment that shook me, and has stuck with me. Last year on Good Friday, an important holiday in the Christian calendar but also one with historic associations of antisemitic violence, I logged into one of my social media accounts. I found that a colleague — he’s a singer and church music director — had reposted a doctored photograph of Jacob Rothschild, of the famous banking family, leering over a satanic image. This echoes some of the most dangerous, brutally inhumane antisemitic libels of the 20th century. Everyone knows this, right? He posted it anyway.

The comments to his post ranged from irritated rejection all the way to blatantly right-wing dog whistles. Some people were alleging that a cabal of “globalists,” all of whom happened to be Jewish, were orchestrating the Covid-19 crisis for financial gain, and that Jews, as a class, benefit from a position of privilege, power, and influence, and thus should be marginalized in favor of other voices. Considering the lowly treatment of Jews across the history of Western art music, I was amazed at how many people on both sides of the political spectrum on this thread agreed on this last misrepresentation of Jewish people.

I am not a stranger to ethically dubious statements concerning my Jewishness by fellow musicians and directors. I was once told by a Baroque opera director that he could not cast me in main roles because of my “exotic looks” and that my “prominent nose” could be distracting. But, he added, he would be fine casting me as a foreigner or something otherwise monstrous. 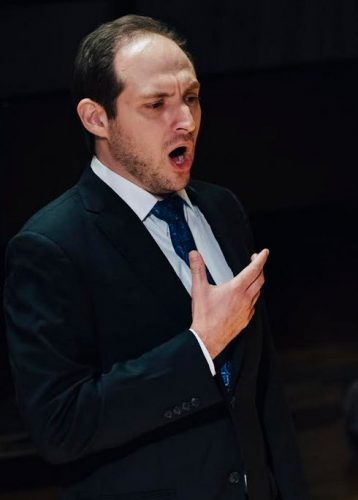 Singing in a professional choir in Bach’s Saint Matthew Passion, we were once told by the acclaimed choral director that the turba chorus of Jews needed to “bark more than sing. Be almost un-human: His blood be on our heads and upon our children.” Another music director of a prominent church asked me, in front of colleagues, if I could produce a “purer, whiter tone” with “less Hebraic cantillation, please.” My undergraduate career at a predominantly Protestant institution was marked by one casual expression of antisemitism after another. The Good Friday incident was not even the first time I had been targeted on social media that year by professionals in voice — the director of a music festival in Germany accused me of playing “The Jew Card” when I dared to criticize soprano Elisabeth Schwarzkopf for her numerous connections with Nazi party leadership before and during the Holocaust.

But perhaps it was the overtness of my colleague’s Good Friday post — the impunity that he obviously felt before posting it — that prompted me to ask how this individual, or any of the musicians and stage directors mentioned earlier, could be trusted to hire fairly, or treat with dignity, their Jewish colleagues.

Considering how frequently it happens in our field — the Baroque orchestra with manipulative, highly questionable programming on the Israel-Palestinian conflict; or pervasive “Orientalist” approaches to Sephardic folk music; or blatant online bigotry across the right/left political spectrum — why does antisemitism seem like the only “uncancellable” offense in America today?

And why are Jewish artists still not being approached to extend their own Jewish voices, and on their own terms?

Performing sacred music within religious (or religiously sponsored) organizations that are exclusively Christian, known colloquially as a “church gig,” plays a vital role in the lives of most early-music musicians, especially singers. Not only do church gigs provide a steady source of income and a chance to perform invaluable repertoire, but they also can sometimes provide access to a vast network of colleagues, directors, and organizers in historically informed performance (HIP) that musicians will tap into throughout their careers. For students or young professionals, these gigs offer a rich pedagogical environment where they can learn and perform large amounts of repertoire within the historically informed style. For many, the church gig serves as the primary entrance into the field of HIP.

The problem is that churches are free to discriminate — and more than often do. Of the ten interviews I conducted for this article, only one musician, a keyboardist, had not felt discriminated against in their church gig. This suggests to me that, across denominations, discrimination is overwhelmingly the rule rather than the exception. These run the gamut from microaggressions all the way to loss of employment.

Jewish singers already begin their church gigs at a disadvantage. On top of the work of musicianship, these singers must learn entirely new faith traditions from scratch before, as sometimes happens, next Sunday. Soprano Katie Lipow, 26, who describes herself in terms of her love of Bach and the German High Baroque, says, “I have, more than once, sung a church job where the person who hired me assumed I already knew a Christian prayer, song, or hymn that I didn’t know [because I am Jewish], and were visibly disappointed that I didn’t.”

When asked if this attitude affected Katie’s work, she recalled once being asked explicitly to hide who she is. “These are microaggressions, at best,” she told me. “One music director told me in private that he had no problem with my being Jewish and singing a service — but that I shouldn’t tell anyone in the congregation about it.”

In any other field, this would be called what it is: a hostile work environment.

Contributing to this environment is the fact that many Christian denominations have not confronted Christianity’s role in two millennia of antisemitism. The heritage of this hatred still permeates the musical liturgy. In extreme instances, antisemitism (in some form or other) remains doctrinal within the denomination. In these cases, the discrimination emanates from the pulpit as well as the choir loft. Professional tenor chorister Matt, a self-described lover of Renaissance polyphony who prefers to remain anonymous, described how his Jewish background marked him as a target for unwelcome proselytizing by the clergy.

“Being a Jew in a Catholic choir invites commentary,” Matt told me. “Some of the commentary came from the head of the entire church. I still remember when I first joined the choir, he asked me if I had ‘ever considered becoming a Jew for Jesus.’ He said it half-jokingly, but also with some real intention behind it. Like, maybe he might be able to win me over eventually. He never tried to hide the fact that he would love if I ‘came over to their side.’ He even tried to use a form of logic to convince me. At one Christmas party, he said, ‘You’re Jewish, yet you sing about Jesus every week. Surely you must find something appealing about it.’”

David, a countertenor who identifies as Jewish, has stopped singing church gigs altogether. “It just isn’t worth the aggravation,” he says.

There has been a lot of talk about diversifying early-music performers, stages, and audiences. Fueled by the Black Lives Matter movement and for the benefit of all, we as a society are finally having long-overdue conversations that aim to upend systemic injustice. But there’s been curiously little discussion about the ancient hatred of antisemitism, which has seen a resurgence across the political spectrum. In the music offices of some progressive denominations — the Episcopal Church and the Christian Church (Disciples of Christ), among them — this conversation is already taking place, and it is important that their efforts be recognized and encouraged. These are, however, not enough to uproot such deep cultural biases, one that their leaders and parishioners might not be aware of.

Today, its ingrained place in Western musical culture, and the nefarious industry that promotes it, has taken root outside of any academic discussion. I am not referring to analysis on the antisemitism embedded in, for example, the Passions of Bach, which have been debated and peer-reviewed at length. Rather, I’m concerned with what’s happening in today’s music-making sphere. Even as American Jewish institutions have come under fatal attack — and an FBI report, published last November, found that of all victims of anti-religious hate crimes in 2018, a staggering 56.9% of them were motivated by antisemitism — this conversation has taken a backseat. No conversation about expanding inclusion in early music would be complete without this discussion, one that I hope to accelerate with this article.

Ian Pomerantz is a bass-baritone and co-founder and co-artistic director of Les Enfants d’Orphée, an ensemble dedicated to bringing the music of the French Baroque to North American audiences. He is a member of EMA’s Inclusion, Diversity, Equity, and Access (IDEA) Taskforce.