Book Review: God is in the Details. Bach is, too, with Baroque Violin & Viola Lessons from Walter Reiter

Walter S. Reiter’s book, devoted to “The Historical, Cultural and Musicological Background of Violin Music from the Seventeenth to the Eighteenth Centuries,” is a rich collection of ideas, techniques, insights, and sources compiled and interpreted by the author during a teaching career of 30 years as professor of baroque violin at the Royal Conservatory of the Hague and the Trinity Laban Conservatoire of Music and Dance, London. 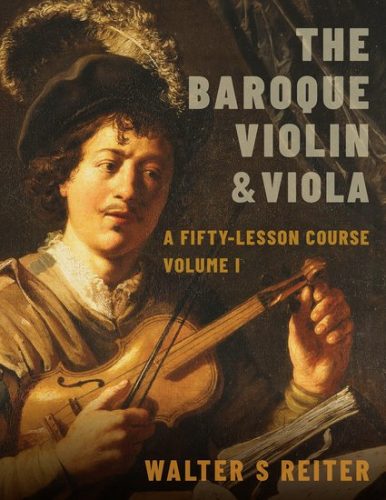 The 23 lessons in Volume I cover a wide variety of topics, such as Choosing a Violin or Viola; Choosing a Bow; Strings; Pitch; Holding the Violin; Copying the Human Voice; Applying the Messa di Voce, Temperament; Learning to Feel Comfortable on Gut Strings, Ornamentation; The Great Vibrato Debate; and Rhetoric. Volume II continues with lessons on Division Manuals, and Applying Vocal Technique to the Violin, among others. Both volumes offer analyses of different styles and composers, including Corelli, Fontana, Castello, Schmelzer, Biber, Vivaldi, and F. Couperin, concluding with an entire section on J.S. Bach. The book also comes equipped with a companion website that enables the reader to download the scores of the pieces discussed, and contains some articles, audio clips, and eight appendices dealing with issues such as wire strings and the “prevention and relief of tension.”

Reiter has done his homework. He has read original performance-practice treatises by musicians and scholars from the 17th to 20th centuries, consulted almost all the available secondary sources concerning the subject, and relied on his own experience as a baroque violinist, both as a performer and recording artist. He makes a few points, however, that are open to various interpretations. One concerns the Messa di Voce, which Reiter justly considers “an important expressive device” and tells the reader that it should be applied equally to both long and short notes. Although this is what Geminiani and Quantz write, Reiter extends his discussion of the Messa di Voce even into études by Sevcik and Kreuzer. It remains questionable what using it for notes of such different durations might mean for the resulting sound, and if this is advisable for today’s musicians.

The author also dares to enter into the controversial territory about the use and application of vibrato. Quoting Leopold Mozart’s instructions in his Versuch einer gründlichen Violinschule of 1756 on how to vibrate — “The finger is pressed strongly down on the string, and one makes a small movement with the whole hand…forwards toward the bridge and backward toward the scroll” (my italics added) — Reiter then asks: “Does this mean that the pitch fluctuation resulting from this movement both sharpens and flattens the note? It would appear so.” Indeed, it would, which makes one wonder whether the resulting sound would be palatable to today’s baroque violin performers and audiences!

Reiter also claims that Fritz Kreisler was not permitted to join the Vienna Philharmonic because its concertmaster, Arnold Rosé, “would not allow vibrato in the orchestra!” Documents prove, however, that Rosé and his violin section did indeed use vibrato, although it was the fairly narrow Viennese style. It should also be remembered that among modern violinists today, there is a great deal of subtle variation in vibrato type (arm or hand) and speed. Reiter, thankfully, comes to the same conclusion: “Ultimately, I believe that the amount of vibrato a player uses is a question of individual taste. Some will use it more than others: I am sure it was ever thus.”

The final section of Volume II, as mentioned, is devoted to J. S. Bach, specifically 11 chapters focusing on two of his works for unaccompanied violin: the Sonata No. 1 in G minor (BWV 1001) and the Partita No. 3 in E Major (BWV 1006). This represents the most discussion about any composer in either volume and conveys to us the importance Reiter places on Bach as one of the greatest composers for violin of the Baroque period. He provides the reader with a detailed analysis of each movement in both works — not only measure by measure but note by note! — and discusses Bach’s ornamentation, suggests bowings and phrasing, and tells us about the emotional meaning conveyed by the harmonic language. I only wish that we were also provided with an annotated score (containing Reiter’s interpretive suggestions) or, better yet, a recording to which we could refer in his discussion. In this regard, I should add another quibble, or source of frustration: There are not enough audio and video clips on the website, preventing the reader from actually hearing many of the works Reiter so carefully analyzes.

The Baroque Violin & Viola provides us with an important introduction to baroque violin playing for the modern violin and viola student. That his approach is thorough, practical, and reasonable can best be confirmed by one of the questions and answers he includes in the book: “Is there a correct way to play baroque violin?” And he gives the best possible answer: “No! There never was and there never will be, although there are some wrong ways.”

Carol Lieberman’s career as performer and teacher on both baroque and modern violin spans more than 50 years. She can be heard on her recent two-volume set of CDs, The Art of Carol Lieberman, Centaur Records CRC 3701 and 3702.